What history age would you use for a new AoE game?

Maybe the WWs or the Ancient Ages. They could also have the next one be like AoM2 or something.

future and modern out of question cause empires dont exist unless u count star wars, some bronze age era would be cool

None of these. Bronze Age collapse to late antiquity. They could distinguish it from the others by having period-appropriate siege and naval warfare, instead of the ballistae and catapults of AoE1.

The options in this poll are really weird. I’m amazed that anyone even voted for American Revolution. That’s, what, about a 30-year period in the history of a single country? It’s like having an AoE game that only includes the Wars of the Roses or something.

I think it’s more about the era, like another AoE3 or something, rather than an actual single conflict.

Personally would love a dedicated war ages game that ends up before the mongol invasion.

Wars of Liberty covers that

future and modern out of question cause empires dont exist unless u count star wars, some bronze age era would be cool

Well, the US still exists

US acted like empire as they were kinda like a colonial power, they had colonies like philipines… but in modern days the whole idea of empire is abandoned

The “idea” sure, they dont call themselves empire anymore and they dont have real colonies, but in practice american imperialism still exists

thats why is hypothetic. just a preference

Right after aoe3 (starting 1800) up until WW1 is fairly reasonable.

Wars of Liberty covers that

Doesn’t hurt to have another game

The time periods that are really missing or under-represented, but has their distinct characteristcs:
Bronze Age: kinda mixed with classical antiquity in aoe1 as chariots and true cavalry appear at the same time, which is a 1000 year gap (may not be fun for a game though because it was mainly weak infantry and chariots, and poorly documented)

Late Roman Empire to early medieval: almost skipped by aoe2. This period features shield walls and rise of “real” heavy cavalry in the west (may not be fun for a game either because technology kinda stalls, but can be solved if you throw some “elite” units into the late game)

Renaissance to 30 years war: used as the epilogue of aoe2 and prologue of aoe3, but intermingled with the “major” time period of both. This period features heavy use of pikes (always treated as a trash unit in aoe), gunpowder cavalry (very underrepresented in the series, especially gunpowder heavy cavalry) and artillery (aoe3 artillery has to be a mid-late game unit so the entire early game that covers this period almost had no artillery)

Late Victorian to WW1: no need to explain 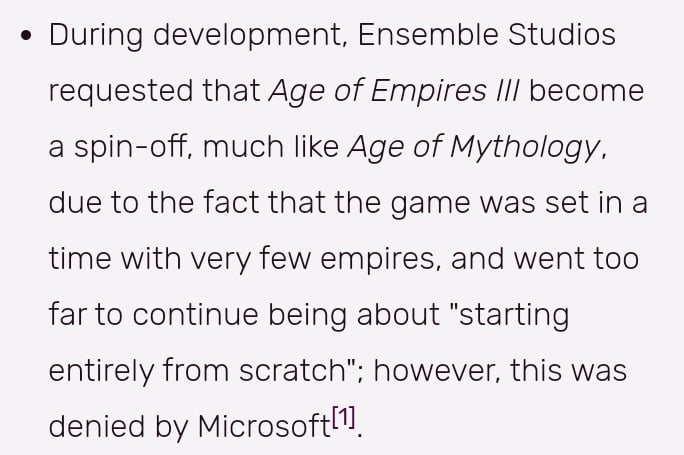 I think if it is still named as “Age of Empires”, empires should exist during that timeline.

This is a very odd statement and had no source. The article it refers to only says the reason is the game is too different.
All European civs in vanilla AOE3 were empires. Colonialism gives rise to true global empires in unprecedented scales. Meanwhile other parts of the world still have medieval-styled empires.
On the contrary goths and celts for example never formed anything like an empire. I would not say AOE2 is in a time period more “imperial” than AOE3, neither is that a criteria for the setting and civ choices.

I’d like to see another star-wars age of empires based game like the previous but better. Perhaps based on the old republic or various periods.

This is a very odd statement and had no source. The article it refers to only says the reason is the game is too different.

On the contrary goths and celts for example never formed anything like an empire.

We’re talking about timeline choice, not civ choices in particular. A big portion of AoE2 civs are not empire.