well this should make the pro arabia fans happy

First off, this is amazing! But aside from the new ranked features and the mongol themed event, will there be bug fixes too?

This is great news.

Mongol event huh, there better be a nice main menu background for the horde.
Also nice to see them moving away from the stupid way of naming the update after the passing month

“All of this comes with a new approach to how we deliver content, updates, and fixes to the game. We will highlight more of the process changes coming with (and continuing beyond) the July update” it would appear so.

Oh, I missed that one… thanks!

First of all, thanks a lot for this update. The prefered map feature is really nice and something many of us have been waiting for. Most of the people I’ve talked to the past couple hours are pretty hyped about this.

There is a small thing though that I think is missing in the explaination (correct me if I’m wrong).

It says :
"A new PREFERRED MAP option lets you prioritize one map over others.
Here’s how it will work:
The game will try to match you with someone else who shares your map preference.
If one player has a map preference and the other doesn’t, the match will use the preferred map.
If neither player has a preference, a random map will be selected from the pool of available maps.
"
I think it is missing the case where both players have a map preference, but it’s not the same map.
I guess in that situation the system will randomly pick between those 2 prefered maps?

Updated the post with some additional details provided by the team in regards to Team Games.

Thanks a lot, cleared my confusion!

Men I agree with the new map pool but please fix the important things as mele attack, hitboxes, pathfinding and misterious idle villagers when gathering, Thanks and I love the game and their work

Also another case that comes to mind :

Thanks for all the clarification by the way!

Am I the only one who thinks they are teasing better pathfinding at the end of the promotion video?

The units seem to be surrounding enemies better.

What will happen in the following case:

Based on the current statement, we will have:

But both maps are also banned by the other player.

So how does this works? 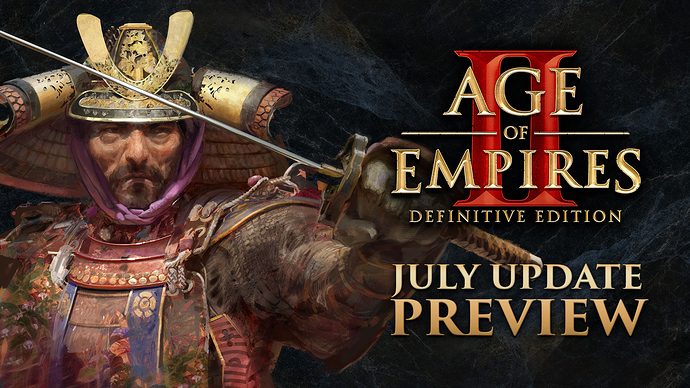 Hi there,
I was surprised there wasn’t already a thread about this.

Yesterday there were very huge changes to the matchmaking announced. I was very critical of a lot of things about DE in the past (I saw the positives too though^^), but this time I have to say it looks like we’re going exactly into the right direction. Great job devs!

The most important thing to me is the prefered map option, which lets you choose a map and this map is going to be much more likely to be played (as long as the other person doesn’t have it banned, but the system seems to look for players where that’s not the case).
That is a really good solution for players, who like to be more picky with their maps, while still keeping everything in the same que. It will probably make it slightly harder to find games on non Arabia maps, but that seems okay to me, as Arabia is just the most liked map and it will still be easier than before DE on voobly ;D. Also it’s nice, that to system works for whatever map you like. I love it!

Nearly as good as that is the new random mirror option, which has been proposed by the community (myself included) quite a bit - now it’s here. When enabled, all players will get a random civ. It’s not quite clear to move if all players need to have it enabled for that to happen, or just the majority of players - in any case this system seems really good to me. Leaves picking open to those who want it, but also gives the option to agree on a random mirror - yay!

In addition to that the map pool rotation is going to happen every 2 weeks and will be based on community votes. That’s also a nice improvement, does seem more like a quality of life thing compared to the two above - still good.

Also there is going to be a campaign mission with a leaderboard based on high-score. As far as I understand that is linked with an event about Mongols. I wouldn’t be surprised if they will put up more missions like that if it is well received. Not that important to me, but a nice idea nontheless.

So overall I’m extremely pleased with this announcement and can’t wait for those changes to go live. What do you guys (and girls^^) think?

It looks very promising. The devs are listening to the community.

I asked this in other threads too: at the end of the promotion video, they show melee units fighting. they seem to surround the units which they attack quite well. Is it a tease for better pathfinding?

When the June-Patch will go online? II - Discussion

Hey all, does anyone know, when the new patch will go live? I am looking so forward to the fixes, which will hopefully come (to finally play multiplayer again), but sadly I can’t find any information, when the update will be available… Thanks!

There are already multiple threads about this.

I do like the changes too. It will be good for the game.