Hey, played a game on ‘unknown’ and found the Lenape as a settlement. 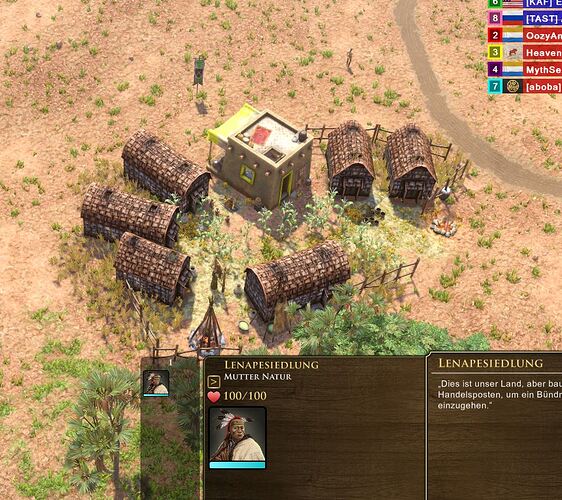 as you can see, they use atm the same icons as the cherokee, but the tech descriptions are different!
also their special unit has an icon and its already translated into german, so it seems pretty far in deveolpement. the unit has a loaded ability “war cry” and its a musketeer type.

dont know, if someone found the lenape yet/a dev announced them yet/…
maybe other natives can be found in the unknown…

Lenape appears in the Battle of Queenston Heights. But it does not have healer, chasqui or some Asian builder wagon (wtf with the last two) in the scenario.
Looks like a lot of placeholders, so there may be plans to add them later.

chasqi and healer is because of the incan player. and asian wagon, because of chinese immigrants

iirc there is one more minor civ that’s only seen on unknown map.

The vanilla Lakota, Aztecs, and Iroquois civs can be found in the Unknown map as well.

I think also vanilla Inca, but I was reffering to a new minor tribe. Just can’t remember the name

Anyways, the unknown map is one of the best maps in game, I play almost exclusively on it outside of serious PvP.

They don’t - the UI shows all available techs including ones your civ doesn’t have access to when you click on a native settlement and hold down alt, which allows you to view their technologies/units without needing to build a trading post, which is what the OP did in the screenshot. You can try this with any settlement in the game and chasqui and chinese immigration wagon will always be there.

No they aren’t on unknown.

That’s great to hear! Glad you’re enjoying it. The Incas have been renamed Quechua and there’s no other minor tribe that is exclusive to Unknown.

The Lenape were created for Historical Battles. But it’s fun to bring the unknown to Unknown

I know at one point they were. Why were they removed? Granted, I have no idea if they were on Unknown in DE.

Perhaps it was done when TWC expansion? They’ve not been on Unknown on DE though afaik.

Must’ve been something added with the DE. I always thought it was funny playing the Natives but being able to ally with yourself on Unknown lol