How cool are these devs?? I’ve never seen so many minor balance issues get fixed so quickly!

Basically every faction we complain about gets fixed! How cool are the buffs to SL, cumans and Tatars! Nice nerf to goths

Every month that goes by i have more confidence in the devs! I’m sure they’ll sort out performance and match making with time

Edit: Been trying the new changes, definitely like them, that buff to tatars really helps them in flat maps (like golden swamp)where their 25% dmg is unusable. flaming camels are AWESOME!

But there is stil one thing that we all hate, but developers not want to remove - chat filter. It is total broken, filters 75% of all messages so you cannot communicate with your teammates.
Why dont they just remove it all ? We dont need that useless chat filter. AoE community is not Fortnite full of kids anyway.

Yes. I must say the devs are doing a great job with fine-tuning a game with such a huge amount of content, despite any post-patch criticisms I will have. The day I look forward to the most is a complete fix for melee pathing so that tournaments will see more melee civs again instead of almost all ranged civs. I am very excited to see the new Tatars and Cumans in action. Especially the Tatars, because the Keshik is a fun and great unique unit that is in what shall hopefully be a once underwhelming civ. 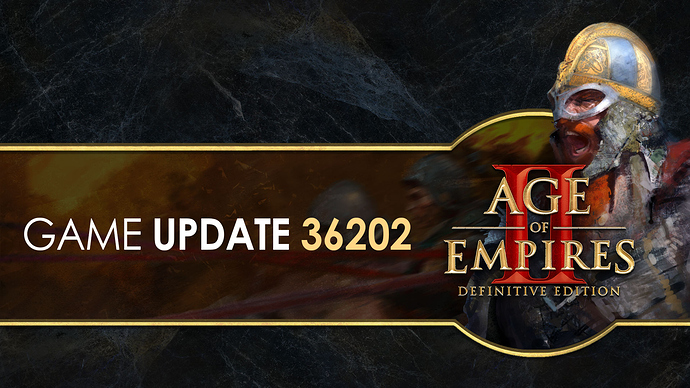 We have just the thing to help you part the clouds of March: a new UPDATE and a new CELEBRATION to bring the best of Spring straight into your home!

so… they say tatars has unique unit, but it’s not in the change log under tatars… what the heck?

also, when will the AI get a fix on it’s building arrangement to remove cluster mess of unit block. at least 2x2 spacing between buildings and to nearest tree line…

They said they would do something about it. I guess they still hadn’t beause it’s also an issue with Xbox live (just log off or switch the filter of if you have an Xbox) which will likely require them to ask a ton of people in Microsoft before finding a better solution.

I really like the balance changes for Tatars and Cumans. The Goths are nerfed back where they were before they got buffed and will very likely need new buffs.

so… they say tatars has unique unit, but it’s not in the change log under tatars… what the heck?

you have to FIRST research the unique tech, and THEN you get the new unique unit

Goth infantry now is better against buildings than the rest (and you don’t need to pay for Arsons) and they still have their better drush. All in all the civ is still stronger than the pre-buff version and it’s no longer going to be banned in tournament so we will get to actually see it in play.

Maybe if the Flaming Camel does high damage to everything, like a Demolition Ship, it becomes usable. But as it is now I feel like it’s an intentional joke unit. Especially with April 1st right around the corner.

Still haven’t tried it (living overseas…) but all in all seems a good patch. I guess mongols SL won’t be that much over the top, but now Cumans and Tartars ones are cool. Free thumb ring and better SL makes Tartars decent. Plus, that flamming camel should help them agains knight line, since their halbs sucks

I feel shortchanged. It’s not really a new unit either. As it was there in the editor all along.

I feel tartars are a very micro intensive civ (or that’s the idea) based on cavalry archers, and hill advantage. And this camel fits into it it’s not be your first option against paladins or elephants, but if you manage to slip 2 or 3 of them into a great army of those units, it’s gonna change the outcome of the battle. Haven’t tested it, but I think it could be useful

Goth infantry used to cost -35% from feudal onward, from a cost-efficiency standpoint outside of Dark Age they were nerfed.

In exchange for that nerf they save 150 food and 50 gold on Arson and get +1attack against buildings only in Imperial Age.

They are arguably weaker than before they were buffed in the first place. Nobody is going to pick this Civ in a tournament.

Goth change sucks. In theory it’s a nerf like Wasted Trojan said. And that’s before the last patch. Unless these devs have intentions of giving them an eco bonus next patch in April, it’s a fail patch for Goth players like myself.

They should give the +35% Feudal cost reduction back and give Goths 2 buffs:

1- Plate Barding Armour: Goths have no Trash unit fully upgraded, and suffer a lot on late Imp because of it, so FU Hussars would be a good idea, while not exactly giving them anything incredibly strong or something that would entirely shift their main strategy.

Tatars might be a great pick vs Indians now, and force Indians to make Cav/Elephant Archers, or lose all those expensive Camels.