the pictures will tell. I played 2 games after the elo started fresh, and I faced these. 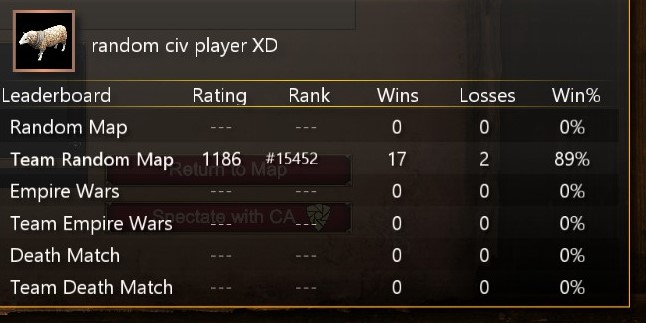 I guess this game doesn’t welcome me who just want to play a normal ranked game. Time to say bye to aoe2 forever. Uninstalled.

Yeah maybe you should give it a bit more time than 24 hours to let it work, lol. Not saying it will end the smurfing topic for good but people will stop losing their motivation if they don’t get infinite points for bashing noobs.

Same here. I am now 1300 in tg and just face two guys with 2600 rank. Feeling hopeless to againist these guys

It is not just today. I have been playing aoe2 de since release. But starting from last year I feel increasing smurfs. Huge amount of players create new accounts non stop to bash noobs. My team elo dropped from 2100 to 1300 even before this adjustment.

From last year I rarely play aoe2 anymore because of these I mostly play aoe3 and aoe4 and actually found those games more interesting. So today I saw this new elo system and decided to download back aoe2 and play a few but unsurprisingly both games I played were against new account smurfs. There is really no hope like this and this game is just not fun anymore. I’m gonna stick to aoe3 and aoe4 I think.

That is just unfortunate matching. But you see these two guys in the picture apparently just created new accounts today and has been bashing lower level players all day long.

But starting from last year I feel increasing smurfs

Yes, because the system from last year until(yesterday?) rewarded these smurfs…but if they change a system you can hardly expect it to work from game 1. Maybe some of them didn’t even notice the change at first or some try to test if they still get many points.

Over the last year you could boost your main account hard, if you played with sb. around your level who just played with a lowlvl account, because you got the same amount of points. Especially the asians felt like they needed to abuse that(for whatever reason) which lead to the smurf topic.

hard to believe you dropped that hard but i can’t prove the opposite…but i know the pain of playing games which are lost form second 1. I was one of the first guys who screamed last year, that the elo system is ■■■■. THis one will be much better.

The new calculation has nothing to do with smurfs using new accounts. The new accounts always start at 1000, which is always going to be much lower than their real level. They just keep winning against noobs until reaching their real elo, then create a new one to start from 1000 again. No matter how to adjust the calculation this cannot be solved.

Most active TG players lost some elo in the last year. 2k1 to 1k3 is extreme but if he has played a lot of TG while we had the elo increase it’s possible if he was vastly overrated because of the sheer amount of Games.

I think we also need a new perception of elo. Ofc everybody wants to climb and elo is a good “measurement” and losing elo never feels good.

But the main reason for the Elo system is to make fair matchmaking. That should be the highest priority.

That new calculation is to punish those who intentionally drop elo to boost teammates ’ elo. Now dropping elo hard and play with higher ranked friends will quickly get their elo back. But this new account thing, is unchanged.

Yeah I don’t mind elo at all but I just wanted balanced games. But when you lose a game hard and click the opponent profile after game, it shows things like 25 wins 1 loss. You know the game is screwed .

Some people always smurf, thats correct, but most people smurfed because they wanted to manipulate the elo. There was like a race going on for the people at the top getting as much elo as possible…even getting 4k teamelo, which is ridiculous.

So now you don’t really benefit from smurfing. The only reason to smurf now is to bash some “noobs”. Yes, this still might happen from time to time but it won’t happen as much as before.

Before the change in 90% of the cases you saw someone in highelo teamup with a new account.

To give you an example:

If a 3k teamplayer plays with a 800 elo smurf and they won the game, the 3k player still got a huge amount of points for the win, which was simply ■■■■■■■■. THIS was the mainreason, why people made new accounts.
Ofc some people will still make new accounts…but this happens in every game…but i’m very sure it won’t happen as much as before.

Tbh, this doesn’t happen in every game. In aoe3 de (which i have been playing for a year), I honestly rarely see smurfs, almost never. Players’ elo still fluctuates like normally, but in a reasonable range, not like 1700 players keep creating new account and start from 1000 again and again.

If you check aoe3 discussion page on this website, most of the discussion is about civ balance, but in aoe2 there are just so many discussions on smurfs. You will feel it.

ooof that’s tough and sucks a lot to get two smurfs in first games.

And i’m pretty sure you will rarely see smurfs in this game as well now…but you should wait at least a week to let these people notice, that this stupid elo boosting isn’t possible anymore. Not even waiting 24 hours is foolish, sry. Some people don’t even look in here so they maybe didn’t even nptice.

Apart from age of empires there are still many games, which have sometimes smurfs. Some people who play at a decent level just like it to bash some noobs once upon a time.

Imagine they made a huge balance change yesterday(like nerfing franks to the ground for example) and people would still complain about franks being picked too often, because these players simply didn’t know.

Sorry, but this is just foolish.

In aoe3 de (which i have been playing for a year)

AoE3 does have a smaller playerbase though, which could be part of it. It seems that the larger the player base of a game gets, the more toxic players show up (take FPS games for example, huge player counts, tons of hackers and the like).

Sad to see you leave. But give the new rating system some time to settle down.

Why are you even playing ranked? Is there nothing else to the game other than ranked play?

There is so much more to the game other than ranked play. Europe diplomacy, insane scenarios like Jurassic Park.

It can be solved in under 1 sec. This game needs to block Family Shared accounts playing online ranked. (Other games on Steam already use this, Dota, CS, CoD all of them.)

It makes sense to disable Family Sharing for such games else you can create billion fake accounts and continue elo manipulation.