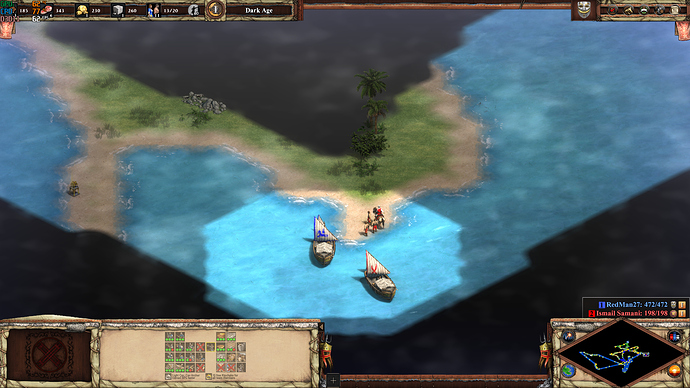 Screenshot (23)1920×1080 762 KB
Just played a random standard game where i was given a transport ship , 3 villagers and a scout(believe its nomad mode?) . I went to another piece of land and started building my town, then i noticed that the other AI’s score remained the same throughout. When i searched for them , after about 5-10 mins i found them just idling near the shore. Huge bug…?
After about 10-15 mins it resigned
Chesqin December 12, 2019, 3:42pm #2

Is that the Earth RealWorld map? In that case this issue is currently being tracked, please let us know if you encounter this issue anywhere else.

AI does this on any Forest Nothing or Forest Prison map where there are no paths to enemies until you cut down and onager the trees. I think that’s how it behaved in HD though so I don’t expect it to be fixed for those maps. Built in maps though should probably be fixed.

Why can’t it be fixed universally? Why can’t AI identify, that trees can have a path through them later in the game and so don’t need to resign?

Oh it can be done, but for them to allocate resources to add AI code for a custom map that is somewhat rare and turns the game on it’s head seems unlikely. Besides, who would play forest nothing with Bots\AI… probably less people than it takes to add the AI code. I doubt its the lack of paths so much as the lack of space and resources to get started that confuse the AI. I think they can find new paths in black forest but i’m only assuming. But no berries or gold? The AI’s starting vils just start chopping and never build a mill and quit after 15 min.
It’d be pretty cool though I guess if they made AI competent on forest nothing just by mentioning it here, but i’m not holding my breath.