Hey guys, just managed to complete the most difficult “challenge” for myself so far - defeating chanca and Ancu Hualloc on HARD, while protecting cana, canchi, all heroes and finishing the temple of the sun.
Of course, i don’t expect myself to be the only “super hardcore” campaign player, i bet there are others who just neglect the objectives and go forward to destroy all enemies.

However, i expected this challenge to be impossible, due to the lack of time (wonder) and constant spam of jaguars.

It’s not like le loi 1 and 2 where you can easily boom and then spam monks and elephants (and cannon galleons), yodit 3 where you can house-wall Dagnajan, tariq 4 where you just abuse hero/tower healing, jabaiting castles/towers/soldiers and then finishing it with ~ 14 hours ingame time, joan 2, tamerlane 2, suryavarman 5 where you just station your rams next to castles and then defeat all enemies at the same time to prevent early victory, or even el cid 5 where you keep killing valencia’s workers so that they won’t finish the wonder in time…

This one was a real challenge! For those who would like to know how to do it: abuse slow speed and saves/reloads. Kill/convert 1 worker so that the wonder takes longer to be built (you can convert both workers and continue the mission, but i wanted the wonder to complete and cuzco to survive), focus on eco and walling off the right side, so that you channel all enemy attacks at your castles next to green and orange - at about 25 min, attack the left chanca with rams, slingers, ~ 7 monks and kamayuks, and keep 2 castles next to orange and 3 next to green’s town centers, with a few kamayuks nearby to pick off rams (herbal medicine is really useful here to quickly heal them). Just keep in mind NOT to create trebuchets so that Ancu Hualloc does not create them himself! (after building the wonder, he will construct them none the less)

Right after destroying chanca on the left, attack the chanca on the right - same style, and build 1 castle next to to the western entrance of ancu hualloc, so that you can jabait soldiers into the castle fire later.
The real challenge starts right after defeating the second chanca - create a LOT of petards (about 100 - keep them in queue) and delete villagers. Jabait Ancu’s forces to the western castle and immediately destroy the gate on the eastern part with your petards, and then just try to hold on the left while spamming petards on the right to take out the westernmost TC (destroying it stops the jaguar spam), and then all the production buildings (castles and siege workshops first, then archery ranges). I got overwhelmed on the left and barely managed to destroy everything, then i created some eagles to pick off remainder of the troops, and finished with exactly 20 years remaing.

Here is the screenshot: 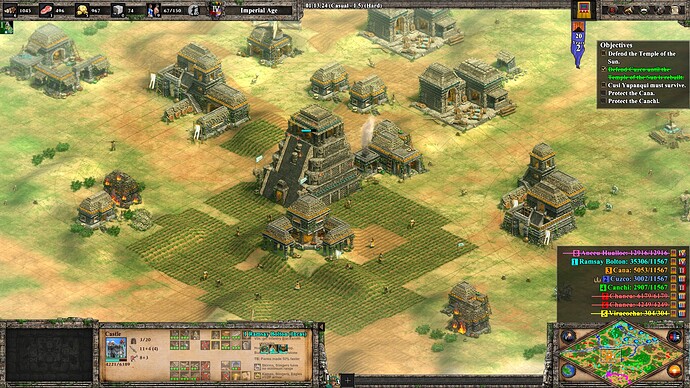 Now. The only mission so far that i wasn’t able to complete by defeating all possible enemy units and buildings that count (i.e. prevent enemy to have “survival to finish: yes”) was dracula 4: 60 minutes with enemy onslaught with no way to create rams and attack enemy (though you could, theoretically, convert some rams of the cyan/teal enemy, but i gave up trying to defeat everyone in that mission…with that timer, no eco nor siege…) - so if anyone has tips about that one, i’d be glad to hear them:) (i haven’t yet finished york, dos pilas and the entire kotyan campaign)