I’m repeatedly seeing trade carts get stuck when playing multiplayer games online. They usually seem to get stuck at a market (mine or the other player’s market). Sometimes they can be un-stuck by giving them a new command, and sometimes they have to be destroyed.

9 Likes
[Bug] Trade Carts stop responding in large multiplayer matches
Trade Carts Stop at a Market (yours or target) for no reason
Trade Carts getting stuck at Markets
dededoritos November 20, 2019, 12:00am #2

Tradecarts and Trade Cogs always have been a little wacky, as Spirit of the Law details. But anyway, there is a correct way to report bugs in this forum, please follow the recommendend instructions if you really want it to be acknownledged.

This is still a massive bug

Carts getting stuck in Markets. Ever since Beta I’ve had trade carts stuck at markets and it’s still an issue. This tends to happen when me or other players have a lot of trade carts. Several always get stuck at a market and I have to delete them. A.I ones get stuck there for good unless the market gets destroyed.

Build lots of trade carts going to the same market. 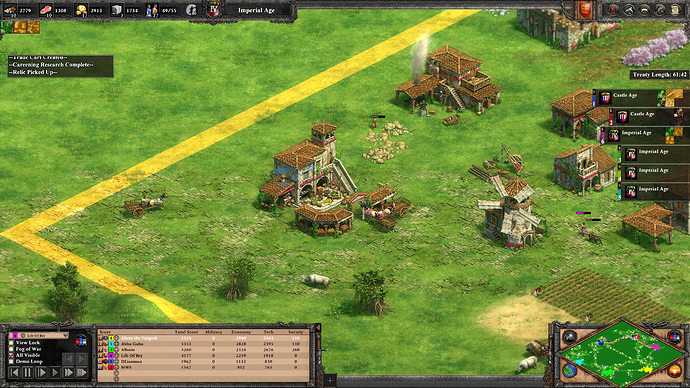 When playing multiplayer games, the trade carts will stop at the target market or the local market. They sit next to the market, empty, doing nothing. This was seen on a BF 4v4. At first, I could select, click random spot to make them move, then reclick the market and they begin trade again. Eventually, they became completely unresponsive and had to delete. Usually 2 or 3 would stop at each end and then the remaining would continue to trade.

No screenshot available. Computer specs for me:

Ran into this bug over the weekend on a 4v4 forest nothing map. Quite game breaking as sans selling wood it is the only source of gold. Destroying the market would free them up but they would just get stuck at the next market they visited. Similar reproduction steps, we had a lot of carts in action, 50+. 8700K, 64GB DDR4, Fury X, HDD.

Trade Carts stop working in multiplayer matches - usually happens when a player is lagging with a yellow or blue watch next to their name.

What happens:
Multiple Carts gets stuck at allied market and they start to pile up - unable to manually move each individual cart, they don’t respond to any input commands.

Usually happens in large multiplayer games when players have 40+ trade carts each.

This bug still exists in literally every single large (3v3 or 4v4) multiplayer game that goes to the late game. All trade carts stop working. It completely breaks the game.

As a reminder to everyone, be respectful to other forums users including the developers. Attacks and insults directed at others is not acceptable per the forum code of conduct. Engage in a respectful manner and contribute useful information to this bug report. If you find yourself becoming very angry about the current state of the game and wanting to attack or insult another forum user or the developers, please take a break from the game for the benefit of your mental health and the mental health of other forum users.

Carts getting stuck at allies’ markets as well as my own, slowing/halting cart gold production. Observed this on many games. Every time, we’re on a large map (Giant or Ludicrous) with 7-8 players. Will be testing if it has anything to do with being on Turbo Mode as well. Before the carts mess up, a huge lag spike hits the game and the fps goes down, everything jittering across the map. Then the trade carts bug out. They stay there unless you move them away manually and retask them, but the fix doesn’t last for long.
It didn’t seem to matter if we had 3 or 12 trade carts going to the same market. We’ve also observed this bug at 200 pop cap, but we most often play on 300.

Here’s how our most recent game went to reproduce the problem:

Here’s the link to a gameplay example of this. There’s no time stamps on the game that I can find but if you keep it on high speed and watch red, the game starts bugging out after the following:

Red gets wiped and relocates NE of their original location.
Red starts building stone walls and cavalry from their stable.
Soon after, game starts jittering.
Watch Teal/Aqua’s market and see the trade carts gather and get stuck. You’ll notice when Red’s carts get stuck, they end up getting stuck back in the home town as well.

Same issue. This bug is a royal pain in the rear.

So… this is still a thing. Just saying.

Thus this is the same as the bad pathing issue for melee units?

Just noticed this recently in a ranked teamgame for 6 or 8 players (so standard map size and settings). I was just starting up my trade and had less than 10 carts and others had none or few trade carts also, so no congestion nor significant bumping yet. Still, I repeatedly saw trade carts frozen at the corner of the ally’s market. Selecting the cart and right-clicking the market didn’t do anything. Ordering it to move a few tiles away and then right-clicking the market worked sometimes.

even with no collision trade it’ll have issue. I made air balloon trade in my mod to avoid this completely. if you’re interested search up a mod called MBA v1 or multiple buff mod.

The solution is quite simple, remove their collison against unit and make them stackable like archers so they just pass through each another when moving.

There is a mod called: no collision trade. It helps with the bunching up of trade carts but it still does not fix the carts getting stuck at the markets. That is a fundamental issue with the game/buildings. Even if i made a mod to decrease/increase the hit area of the markets, the issue will still happen. The developers need to dive into this issue and fix it ASAP. The game is destroyed for end game play. That’s the only part that is worth playing.

The trade carts still have to “collide” with the markets in order for them to work. They also need hit boxes or they would be invincible… That’s not how games were made back in the day. If they had used a new engine, yes that would be possible to easily fix, but sadly they kept the old engine and it has severe limitations.