Penalties for leaving and helping the remaining player 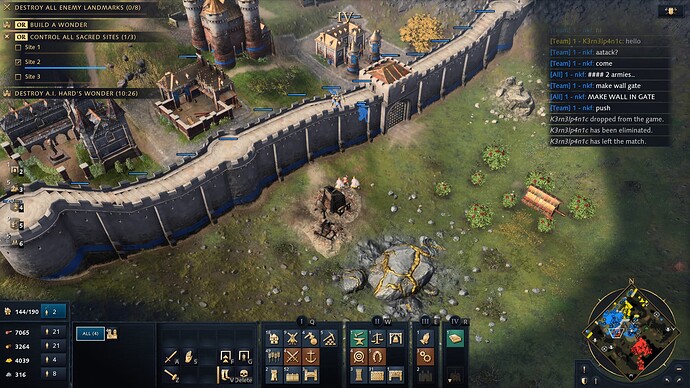 Will there be any help (automatic BOT player) for players who are left alone in the game?
Whether it’s a bot game or PVP, there are people who leave without saying a word after 30-40 minutes of play. You are then completely alone.

I just played a game where we played the BOT hard level. 30 minutes of building the economy,
after which the player leaves without saying a word and I remains alone. All his army / economy becomes “white” and I have to play alone. Because someone goes out, we are punished for nothing.

What about penalties for outgoing players?

this is dumb, because who determines if its a justifiable quit, and what isnt… maybe you have no chance of winning and i want to surrender?

If nothing, at least will the remaining player receive an ally’s bot to a moderate degree?

they should let the AI take over from players that left, its retarded that the devs refuse to do this with aoe games, when it happens with other games (COH2)

Game ends when u

There are peoople who just make defeatism and surrender too fast or just because they get bored
Then u left alone, if it is 3v3, and second player see there someone left he does it to. and u stay 1v3, just because one guy surrendering too fast.

Building 20-30 min economy for nothing.
There should be atleast 10-15 min ban for people just rage/defeatism qutting too fast ruining game for others.

Had a game yesterday my ally I think just walked away from his computer and let the game run. Had to just give up. It would have taken a little while for my 2 opponents to beat me but like why are you playing if you are going to just leave your game running and walk away or quit really fast

Then game should kick this player after 5-7 min of AFK. Then BOT player coming in his place. Why should be have ruined game for other’s quits/afk’s?