Please add time controlling accumulated for each opponent to win king of hill. So we know waht opponent to atack

i would be good if we could see time accumulated or time controlling fort to win all time for each player on king of hill, and not only when he is controlling the hill.
also hill should be on the middle of the hill to be fair. 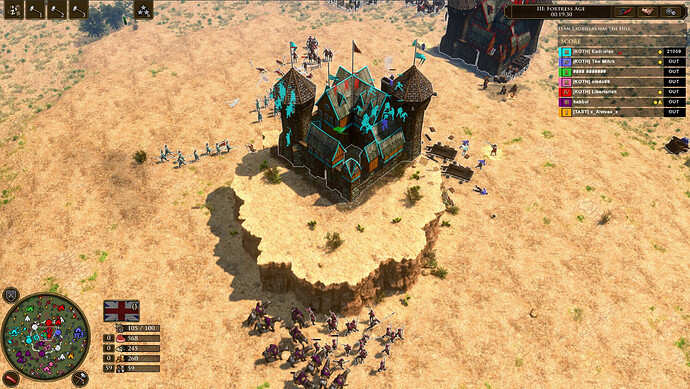 also hill should be on the middle of the hill to be fair.

Placing it on the small, randomly generated inaccessible cliff was already very difficult; the Fort needs to be very close to the edge for units to even be able to capture it from below. I think I did the best I could, given those circumstances.

You did OK on this one.

then just do the cliff smaller

The KOTH forts are finicky and I don’t think Eaglemut is editing the maps anymore since DE. I could be wrong tho.

then just do the cliff smaller

Couldn’t make it smaller, because then the fort wouldn’t even spawn at all sometimes (not enough space).

I don’t think Eaglemut is editing the maps anymore since DE.

Correct. This was with the release of EP5, where I’ve worked on the implementation/balance of KotH on essentially all ESOC Maps at the time.

mmm i think that work is for devs then. spawn in the same palce always. Whatever, is ok if the fort is on the edge of hill, i just need to know how much time has accumulated each player at a glance

I’d bet that’s not going to happen, but the devs already put nomad spawns ahead of team spawns so who knows.

I’d be able to improve this koth spawn slightly by changing a couple numbers but devs don’t seem keen on having people from the community help fix the maps anymore.