Please at least add hotkeys into the game!

I saw to many rts games on market dead on arrival, or quickly dead a lot, because of hotkeys. They are absolute necessary for rts game. You may wonder, but majority your actions are actually in key presses, not in mouse clicks and mouse movement. If game doesn’t have hotkeys, not only that it is not fun having to everything click with mouse, but gameplay it way to slow, because noone is fast enough to queue units with mouse and yet macro and micro at the same time, it just leads to crippled gameplay.

Than custom hotkey settings for everything is good idea, for every player to be able to customize hotkeys to their needs. Camera hotkeys, unit building/group. Learn from starcraft 2 about proper user interface, hotkeys etc.

I feel if this game had good mechanics and hotkeys, it would be much more popular and sold out more.
Than ofc. good balance is needed and patches from time to time and devs has to listen to community. Age of empires probably won’t be esports game, but at least it could be more competetive and had 1v1 queue, a lot of people playing rts want challenge, this may actually bring some players to the game. And gameplay has to be fun, if game suck in any way, it is not good. There were many games, with half-baked game design, one would think that in 2019 devs know how to make rts, but not obviously. And performance should be always before graphics. Game should run at least 120fps min on low.

I feel if this game had good mechanics and hotkeys, it would be much more popular and sold out more.
Than ofc

Do you have anything that suggests AOE 4 doesn’t have hotkeys?

True story. One the AOE3 letdowns for me was the complexity of hotkeys - they are not “interface oriented” like in AOE2, but name oriented (if i remember correctly). Hard af to config it in any way useful.
The importance of hotkeys in competitive gaming for rts can never be adressed to much.

I remember original AOE 2 had name oriented hotkeys. Until HD changed it…

And i’m happy it did! waaay easier to learn and memorize.

waaay easier to learn and memorize.

See HD haters? This is one of the things it did right…

Though the keys are always customizable.

I am not suggesting anything, as i said it like requirement. Age of empires 2 had no hotkeys for production what so ever, so i didn’t even played the game much. I don’t see reason why any RTS shouldn’t have hotkeys, it is easy to implement - just couple hotkeys… And game is much less obnoxious, i have 200 apm and if game didn’t have hotkeys for production, i wouldn’t be able to play it not joke…

Age of empires 2 had no hotkeys for production what so ever,

You sure about that? I mean, I never remember a day when it didn’t have hotkeys.

Uhm, ALL Age of Empires games have and always had hotkeys, for unit production included. For older games you just need to go to options and see which hotkey they belong to once their respective building is selected.

And I like how OP brings Starcraft as an example since it DIDN’T actually have custom hotkeys, while Age of Empires 2 which was around same time had custom hotkeys since first release (and can’t remember if AoE1 had them too in 1997, it might have had them). When it comes to user interaface, AoE was way superior to SC which didn’t even have options to choose a different resolution.

I like Starcraft, but it was flawed when it came to hotkeys because you couldn’t customize them. Only since Starcraft 2 you can do that. And while SC2 gives you the possibility for camera hotkeys, it still lacks the “go to building X” hotkey.

There is reason to share his fears though, because Relic, the AoE4 developer, never developed their games with the possibility to change hotkeys, which is indeed quite shocking.

No they didn’t i played aoe2 and there were no hotkeys. I am not talking about partial hotkeys, i said production hotkeys especially, which are most core hotkeys. There is no reason for player to be forced to queue all units and build buildings with mouse, you can do that with keyboard, it doesn’t break game, only making game more focused on playing instead of spamming mouse clicks on icons.

Oh dear… Yes, there are hotkeys, always were, not only partial hotkeys, but hotkeys for production as well - every unit in the game from every building in the game had hotkeys, all the way since 1999, hotkeys that you could customize as well. Do you really want me to screenshot you from the game? Actually let’s do that:

Edit Hotkeys menu where you can configure it to your liking (Where do I go in Starcraft 1 for that again?):

In the game with Town Center as example, with Help turned On:

In the game with Town Center as example, with Help turned Off: 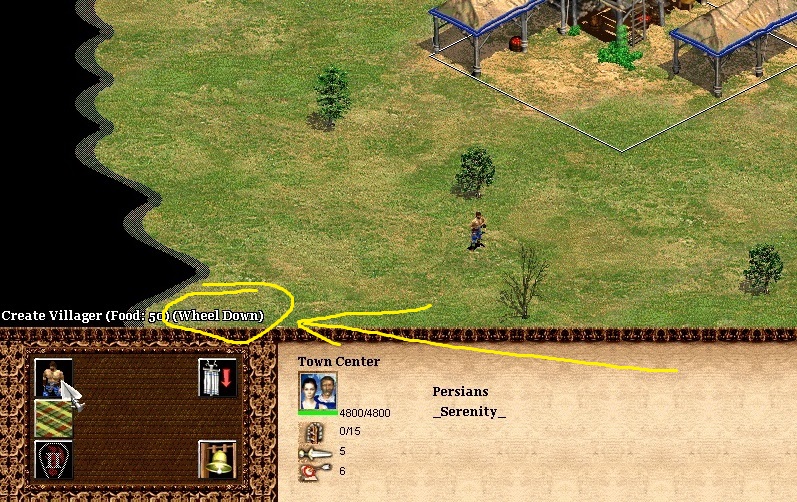 Of course, mouse wheel down is just my personal edited hotkey in this case, you can edit any keyboard hotkey for any unit, can’t remember what the default was.

Oh, and all screenshots taken on the 1999 version. You are welcome!