Some of the available revolts didn’t get actual independence until after World War I or II, but did have attempted revolts during AoE3’s time. They could just go with Serbia instead of Yugoslavia.

Yes but Yugoslavia as a concept didn’t exist before WW1, and Italians didn’t control serbs territories.

The only slavs balkan territories were under the Republic of Venice in Istria and Dalmatia, and while they were of slavs origins, they considered themselves part of the most serene republic for the most, so the didn’t revolt. They also were mostly Croats. Some revolts instead happened in the venetians controlled Greek territorie, so Greece makes more sense.

Garibaldi offered to serve the Union Army during the Civil War. Italians also served in both the ranks of Union and Confederate forces.

A Papal general from Ireland, who fought Garibaldi and the Sardinians, Myles Keogh, also served in the Union Army during the Civil War and died with the 7th Cavalry at Little Big Horn.

I didn’t say Serbia should be available to Italians. They did attempt a revolt during AoE3’s time range tho. I also said they shouldn’t use the Yugoslavia name.

They would have been the ideal unit for the Habsburg royal house. Instead, they’re inaccurately used for the Hungarian revolution while the royal house gets the most poorly named units imaginable. Wikipedia even has the Habsburg monarchy as the “country” they fought under. 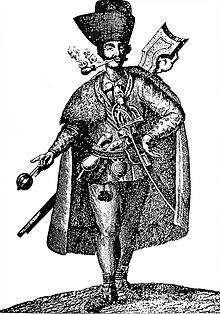 Grenz infantry or Grenzers or Granichary (from German: Grenzer "border guard" or "frontiersman"; Serbo-Croatian: graničari, krajišnici, Serbian Cyrillic: граничари, крајишници, Russian Cyrillic: граничары) were light infantry troops who came from the Military Frontier in the Habsburg monarchy (later the Austrian Empire and Austria-Hungary). This borderland formed a buffer zone between Christian Europe and the Ottoman Empire, and the troops were originally raised to defend their homelands against ... 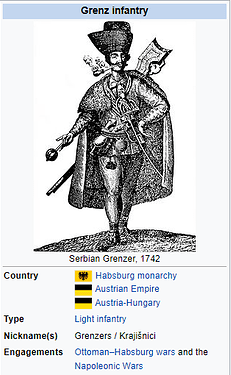 It’s an infinitely better name than “Line Infantry”, and they could have been a much more interesting and versatile unit.

a militia by the Habsburgs in the 18th century to defend the border with the Ottomans and also used as skirmishers in the Seven Years’ War. However, by the time of the Napoleonic Wars, troops from the Frontier were now formed into more regular line infantry regiments, but were considered by the Austrian generals as something between light and line infantry. They were given training in marksmanship, skirmishing and the basics of linear tactics. At the start of the war, the 18 Grenz infantry regiments formed about a quarter of the Habsburg army.