African javelin rider is a monster unit with unreasonable hitpoint and melee attack, even age 2 Dutch skirmisher can’t beat it in 1v1 combat. 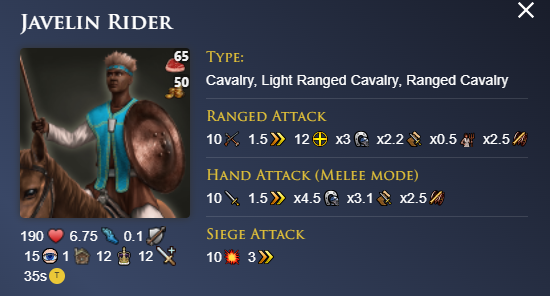 Skirmisher needs 10 shots to kill a javelin rider in 30 seconds, while javelin rider only needs 18 shots in 27 seconds, and the situation gets even worse in melee combat. 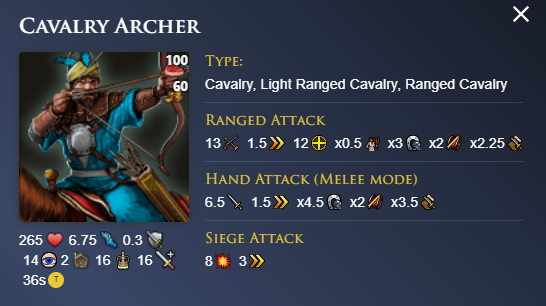 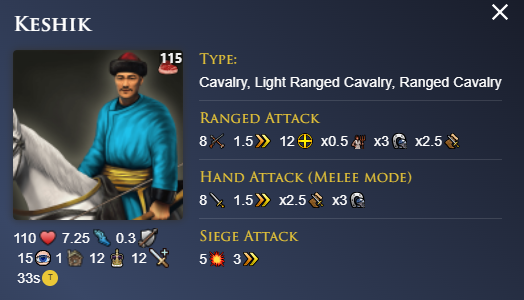 Compared with cavalry archer and keshik, we know that the melee attack of javelin rider is insane (same value with ranged attack and get 4.5x against hand cavalry, double buffed).
Here is my recommended nerfs: 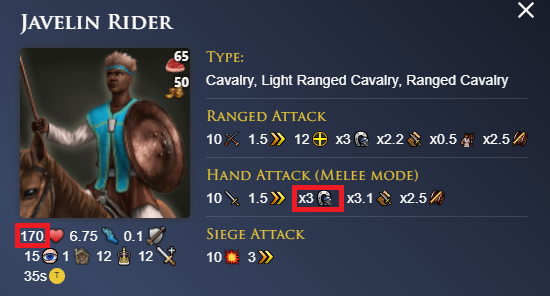 that’s right, the javelin rider is too OP.
can’t believe that someone with 115 resources can combat heavy cav with 60 damage in 12 range in commercial age. and they have no need to be operate.

I believe these guys are right.For his combat ability,javelin rider is too cheap now.

javelin should be a little bit stronger than keshik. In my opinion, javelin’s hitpoint (base data in age 2)should be 160 or 170. 190 hitpoint with 0.1 ranged armor make it can’t be deal with musks and skirms.

Keshiks are trained in batches, so their resource cost is discounted because of that. They should not be the baseline that Javelin Riders are compared to for cost.

Not only the cost but also the stat of keshiks are discounted, look at the Russian units. So keshiks could be the baseline.

Its speed really does hold it back at being a proper goon type or cav archer type unit. They cant snipe or chase after cav because of the speed and since they dont have melee resist, they need something to counter cav in close combat

the ethiopian card that gives them extra armour is the thing that makes them really strong, the hausa one only gives some hp and extra dmg vs cav i think and it turns out to be not that good

Dragoons are the archetypal unit that you need to compare to.

Keshiks are cheap glass cannons with bad base stats before Old Dynasty reforms and Mongolian Scourge are sent. Keshiks need to fight at range and use their speed while Javelin Riders are meant to be able to hold up in melee.

The cost adjusted health of Javelin Riders is in line with Cavalry Archers. They just perform better against Skirmishers because they have range resistance. They will hold up much worse against pikemen. Skirmishers also have much better range than Javelin Riders so it’s not as bad as you make it seem.

The only thing that’s exceptional about Javelin Riders is their melee multiplier against heavy cav which is supposed to be their defining feature.

I’ve always felt that the unit is fine except for the pop cost. 2 pop maybe?

They’re complaining about their performance versus age 2 skirmishers. At that point in the game a per cost basis is more relevant than per pop.

The low population is their real strength but it would be a pretty harsh nerf to double that requirement.

A more subtle nerf could be to lower their range. It would make them bunch up more and be less efficient in large groups. It would also lead them to commit to melee more often which would fit with the spirit of their design. And it makes sense that a dude hurling a spear wouldn’t be able to reach as far as a bow or gun.

Javelin is quite unbalanced. I don’t know why it hasn’t been put in line with other ranged cavalry. Probably because African civilizations are not under radar right now.

He’s a gunpowder cavalry with the rate of fire of a cavalry archer on top of having a high melee damage, starts with bonus vs artillery and he is available on Commerce Age.

But they are easy to balance. A 2-pop condition or a small tweak in stats would be enough.

The best unit for comparison is Zamburak.

Bow Rider comes in second and Early Dragon in third.

Skirmisher needs 10 shots to kill a javelin rider in 30 seconds, while javelin rider only needs 18 shots in 27 seconds, and the situation gets even worse in melee combat.

I think he is comparing the age2 skirmisher with the age2 jav.

They do seem pretty strong in 1v1 sup, I think part of it is african civs can offset the high gold cost for the first few batches with cattle.

Maybe they should look at cost of upgrades for african units, they already shadowtech all natives and have cav and infantry in same building, why are their unit upgrades combined? edit: and more access to gold/wood through cattle exchange

Here is my test result in editor. Both of them are in the attack range of its opponent and skirmisher give the first shot before javelin rider begin to attack. 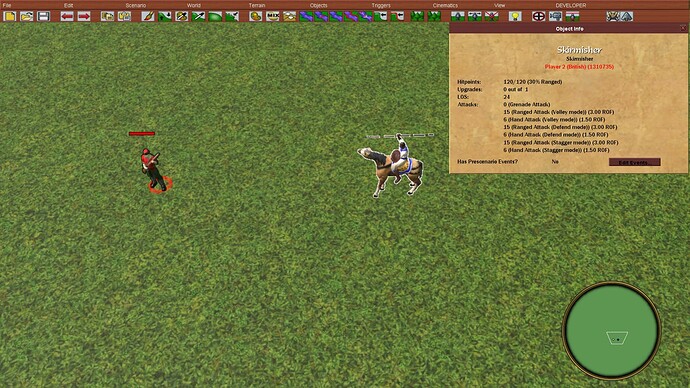 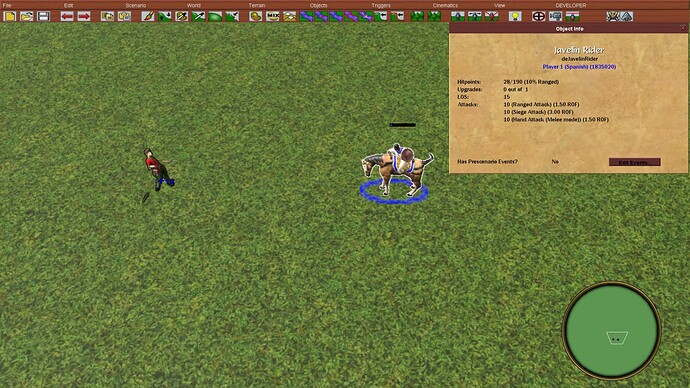 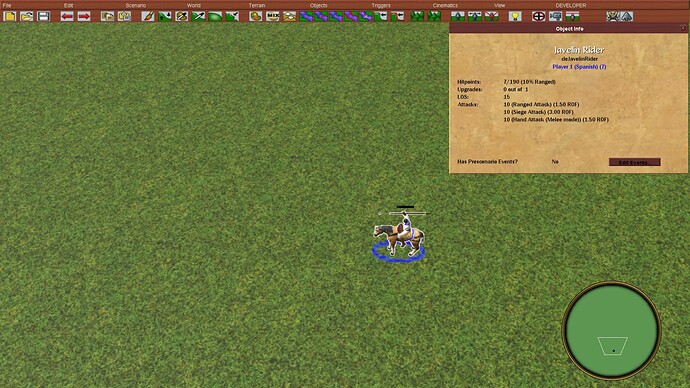 Javelin rider‘s insane anti-cavalry melee attack is also a big problem. There is a test for uhlan vs javelin rider in melee combat, and uhlan loses even though uhlan attacks first. 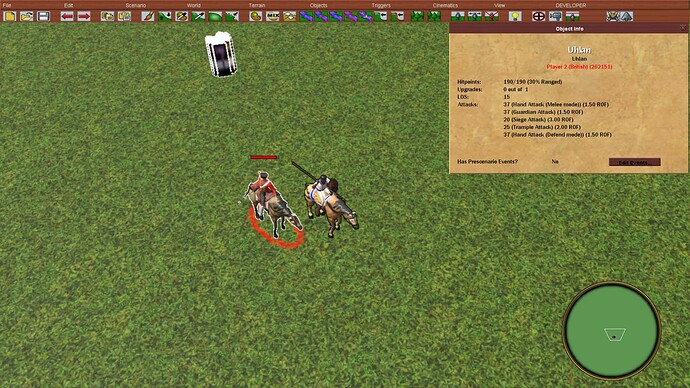 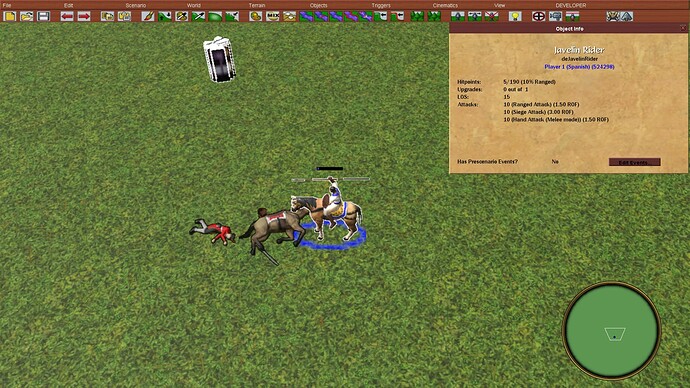