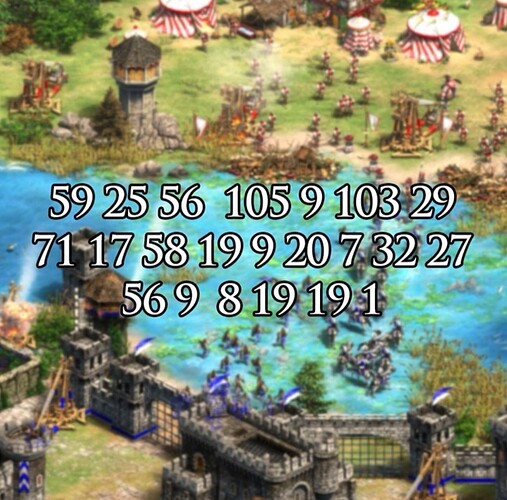 What could it mean?

But what could it mean…

spec chat is finally back maybe? 11

that would be awesome

Bring light to the dark ages could reference a civ known for its culture, education etc?
(Such as Bohemia

Otherwise we have “sydta” if that happens to mean anything

It will be coop campaigns. I found a folder named “coop” (which later got removed) in the campaign folder some time ago.

I don’t really see the connection? But yeah we will get co-op campaigns, dunno whether for free or DLC

Set your Diplomacy to Ally is part of a taunt in the original AoK - basically an AI in a diplomacy game would become the ‘Liar’ and early on, ask you to Ally with it, only to betray you later.

I think this is meant to be a hint to the Fan Preview Age II DE announcement, and given this AI taunt, and its previous use in game, I wonder if it reflects an upcoming significant AI overhaul for the game. I know they were planning some Deep-Learning stuff for Age 4, and usually these Age 4 features have leaked into the other DE’s for bug testing - e.g. the whole multiplayer server system.

What’s coming to brighten the dark ages of Age of Empires II: DE?

AoE1 as a DLC for AoE2 confirmed.
Ok that’s too much wishful thinking.
Maybe it’s just a new Civilisation that is from the “Dark Ages” like the Goths or Huns.
Maybe it’s also some new gameplay element for the early game? Maybe a gamemode between Empire Wars and the normal start.

Maybe the Dark Ages just refers to all of the Middle Ages. But people don’t really use that term anymore and it’s the name of an Age in AoE2 so it’s more likely it refers to that.

How much you wanna bet it’s a cosmetic mod/dlc that replace Dark Age architecture?