The IO is officially a “worker” so might as well consider it a special villager.

How about farms place around granaries get a discount, 75W → 45W

my idea is that the village always offers 40 of population, comparing with the other civilizations the saving is the following: 4 houses are 200 of wood, the adlea costs 125 of wood, therefore the saving is 75 of wood (remove the population limit of 40)

The return time of China’s unique technology is too slow and requires high demand conditions; the tax system cannot be collected as long as it is far away from the TC, and buildings such as the Palace, Imperial College, and Great Wall Gate are weaker than landmarks of other civilizations. Imperial officials seem to have many abilities, but supervision is only useful early on. The tax system makes it difficult for players to estimate the amount of gold income, and it can only be used as auxiliary income after all. China started to be powerful in the Age of Empires, but by then it was too late, why should players use China, a civilization that took so long to become powerful, if the player could win faster with other simpler civilizations?

China started to be powerful in the Age of Empires, but by then it was too late, why should players use China, a civilization that took so long to become powerful, if the player could win faster with other simpler civilizations?

What you said is precisely portrayed by this graph. We understand that dev what civs to have power strikes and designed China to be OP late game. However, how do you benefit from late game advantages when the avg game length is around 25 minutes, and when the civ win rate is sub 40% by 20 min and gg called by 25 min mark ? 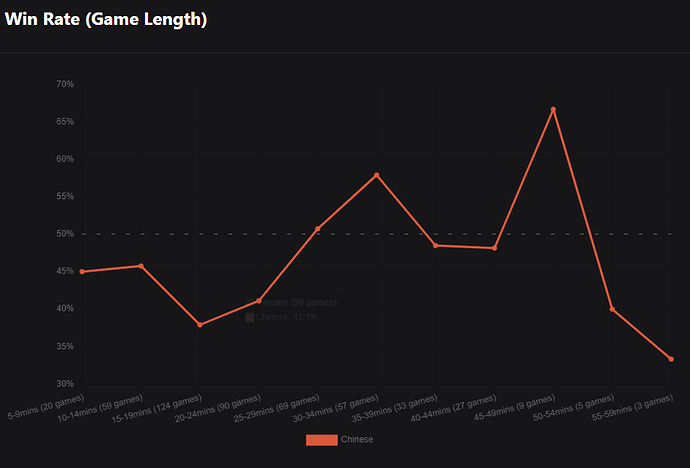 China isn’t changing… the statistic doesn’t support it being a weaker civ; the averages from gold+ is 50+ with highest rates having it at TOP 3 win rates…sigh

I still hope granaries buff is fixed so it doesn’t need to be stacked and maybe cheapen the granary a bit… also a ming dynasty semi expensive tech for auto tax would be neat!

Lastly if they address the issue with MAA in feudal with a proper counter… china will be top 3 civ behind mongols and french; period!! QUOTE ME!!

first off nobody that is serious SERIOUSLY plays quick search anymore. secondly why would you include 1100 elo???

You reckon gold level players are not a good representation of the player base right? At this level it is more about skills and talents than civs.
Similar to plastic low elo players, in a way that these are the extreme ends and thus doesn’t have much representation power.
This is why you should never use golden league’ results to judge civ balance or you might end up analyze beastyqt games vs a random top 100th player and conclude that all civs are balanced when beastyqt uses them.

On the other hand, 1100 ELO is pretty much above average fyi

The game should NEVER be balanced around the “average” player, b/c the average play doesn’t have a strong control of the game hence why the majority of the player base is in the bronze level in ranks and around 1k elo… So showing civ win rates around the average range just shows what the average find easier than others hence why you see the ez civs up top and the harder ones lower and lower.

The average players are smart enough to learn build orders and strategies to win. As long as one understands the goals and the mechanics within the game and the civs one’s playing, they are qualified enough. Take Spirit of the law for example, an average player with a deep understanding of the game mechanics and balance.

You don’t have to be like Serral, Maru or a professional gamer to be qualified to play this game. Neither does it take a PhD degree to understand that some civs are OP and some civs are UP, not as hard as you made it out to be.

the Rank win rates suggest something very different from what you’re saying about the average player. And again if you tune the game for the average player you’ll end up with major imbalances at the decent to high levels of the game.