In all aoe games I’ve played so far, the logic for how ranged units select targets has been pretty basic - closest unit gets shot. This is not that big a deal for the other titles, but I think it needs some more development in aoe4 - specifically when ranged units are placed on walls.

It would be a reasonable change that the units on stone walls attack enemies that can actually threaten then on the wall as opposed to the ones closest to them - like archer on a wall aims for enemy handcannons /crossbows instead of the maa directly beneath them.

For example, archers/xbows on walls could have the priority as follows:

The list is descending priority based on what (imo) are the units most likely to overcome the elevation advantage. It’s not meant to indicate actual ability, just a proof of concept. Thoughts?

at least I would settle for them to prioritize attacking units over houses or buildings, I proposed it to them a long time ago

Dude if they just had a simple attack melle or attack ranked option for the group selected. select group ctr+m attack all melee. ctr+r attack all ranged. but that will come in 2032

Empire Erth II has an option for the unit to prioritize the attack of the type of unit you indicate, but when the mod editor came out they were suggesting the realism of arrows as aoe2 and it reminded me that before they questioned if aoe4 was a competitive game, the importance of the “micro” in the game and that’s why I didn’t mention it. What I did do later is a suggestion that they do not attack buildings since it makes the use of the “a” key useless because it will attack the first thing it finds, whether it is a building or a unit. 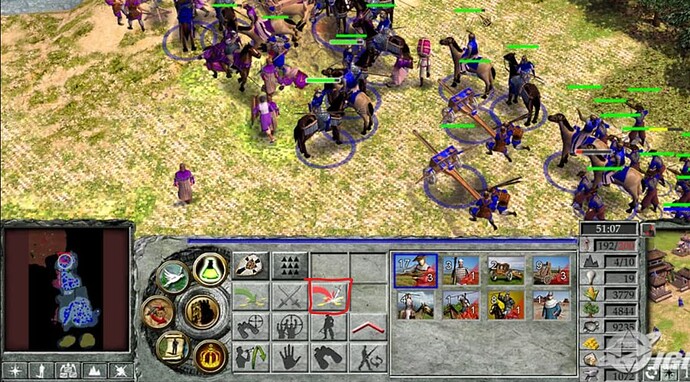 This is really a problem that needs to be solved. Intelligent moving attacks can effectively reduce players’ redundant operations.