It was said in an interview that ranked queue wouldn’t be present at launch. This is a HUUUUUUGE mistake, since you need ranked games to keep streamers streaming (and like it or not, streamer activity is necessary for the health of a game).

How to buy some extra time while “launching with ranked queue”? You put in a very badly working ranqued queue, but you cannot access ranked until “you’re level 20”. This way people has to get some experience in the game before they can actually go rank. Now, say it takes like 3 days of playing non-stop to reach level 20 (it shouldn’t be more than that). Now you have 3 free days post-launch to get the ranked working properly, and you technically launched the game with ranked, so nobody will be upset.

Where did you hear they wouldn’t have ranked queue?

They mentioned they were running an elo system as early as the closed beta.
Here’s the leaderboard:

ople has to get some experience in the game before they can actually go rank. Now, say it takes like 3 days of playing non

Interview says there is ranked and leaderboards on launch: Age of Empires IV Q&A with World's Edge - YouTube :

when the game launches we will have multiplayer up and running we have a quick match system that allows you to play with elo rank. you will have an elo rank generated for you when you start playing and it will match you up against people that share the same ranking. you’ll be able to check out that that ranking at age of empires. com so you can check out where you fall in the leaderboards keep track of your progress against other people. in our last beta test that we did our closed beta test we were actually running that system behind the scenes and we didn’t we forgot to tell everybody that we were but like everyone’s been being rated since they first started playing

Ranked elo is already used on both beta and stress test for quickplay. it’s just not shown on list or to players as it’s not actual ranked mode we will have.

It was said in an interview that ranked queue wouldn’t be present at launch.

That was not said. Go find the source yourself rather than regurgitating something third hand. They have in fact specifically said the opposite. 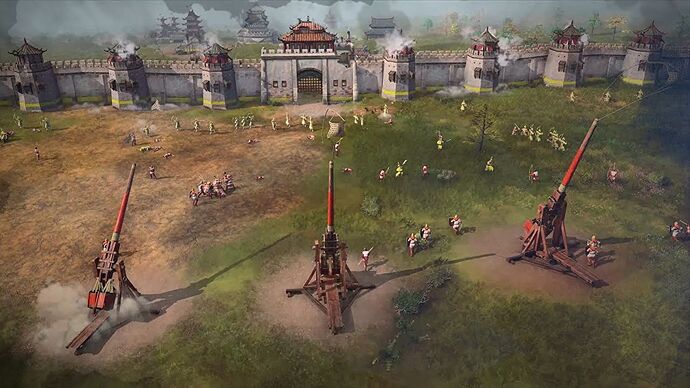 The Age Of Empires 4 devs on bees, cheats, and "the John Wick of medieval...

With Age Of Empires 4 due to launch on October 28th, we talked to its lead devs, mostly about bees being used as weapons.

"We discuss multiplayer briefly, including the fact that AoE4 will - as expected - have defined seasons for ranked play. They won’t be available at launch sadly, but they’ll be following at a later date. “We’re going to try to time major balance updates with new seasons starting,” says Isgreen, “since we want to encourage people to kind of have a reset and get ready for a new meta, when the seasons switch.”

As we stray onto the topic of the much-demanded global queue feature for ranked multiplayer, Isgreen takes a moment to (mildly) lament the high level of expectation on AoE4’s launch feature set driven by the runaway success of AoE2’s definitive edition. “It’s something that we absolutely want to add - but it’s worth remembering it wasn’t in AoE2 at launch, and it wasn’t even in Definitive Edition until later. So we’re… we’re trying.”"

So perhaps next time be a bit more civil instead of using your ■■■ as a second mouth.

But yep, it’s true that in the interview that Tempires posted they mention there already is some sort of ELO system. So what’s going on here?

I hope the scoring system is available on launch day, but every day I am more disappointed in the work done by Relic, are they thinking of selling us an incomplete game, what have they been doing all this time?

Really? a game with only campaign and limited multiplayer, what a shame

Seasons won’t be available, not matchmaking.

If you’re talking about the global queue comment, that is referencing the UI element present in aoe2 and 3 that shows all units and techs currently queued. That is what was “much-demanded” in the beta.

No one was demanding ranked matchmaking because there was literally already cross region matchmaking with rankings in the beta. Rankings themselves were not shown in game, but they even showed the top of the leader board after the beta.

So perhaps next time be a bit more civil instead of using your ■■■ as a second mouth.

But yep, it’s true that in the interview that Tempires posted they mention there already is some sort of ELO system. So what’s going on here?

I’m sick of people making assumptions (against all evidence) and then spreading that misinformation, and there have already been like a dozen threads going over this.

What’s going on here is a combination of a general lack of reading comprehension, a desire to complain about something, and people making assumptions based off of one comment from a gaming “journalist” despite all the evidence to the contrary.

Ranked barriers only make sense in really heavy teamgames such as League in which 90% of what is happening is not directly influencable by your direct input.
Therefore the higher the barrier for entering ranked/making certain picks, the better the quality of the match.

There is no reason why level barriers should be a thing in RTS games for anything, since the main focus is 1v1 games.

But I 100% agree that it’s an absolute embarassment to have such a quintessencial thing such as “ranked matchmaking” not in the game and try to fix it with a patch after launch.

Can we stop with this misinformation? There is ranked matchmaking, they have straight up, unequivocally, on video, stated as much. And they have shown it was operating under the hood during the betas.

Already edited it after I saw the other post

Here’s the main source directly from the Devs. [16:00] “What will the multiplayer experience be like and how will matchmaking work?”

There you have it, Adam isgreen has directly confirmed elo matchmaking at launch.

In general I’ve found game journalist sites to be very bad at conveying information about Aoe IV.
So I would advise you to stick to the main channels first.

Yep, gonna stick to the sources and avoid anything journalism-related. Learnt my lesson.

Glad I could help!

I don’t blame you for being confused by the article, it was circling around these forums for a bit and a lot of people made drastic assumptions because of it’s confusing writing.

Thankfully Relic finally sat down and told us about things directly.

you’ll be able to check out that that ranking at age of empires. com

We will have to go to an external website to check the leaderbords?

No player profiles? No vanity rewards? No league badges? No statistics for how well you’re doing on ladder? Just an external list with ELO values? Amazing! Wouldn’t want to scare off the intended audience.

You are making a lot assumptions from single sentence saying one thing. It’s not mutually exclusive

All Definitive editions have external leaderboards this on site but also in game. There is also player profiles too but those were not fully finished ever. DEs have small section in game too but nothing special. We don’t know what they will have for aoe4. It will be preferred to have data available to community projects to more advanced stuff. All we know seasons start Q1 2022

You are making a lot assumptions from single sentence

At the beginning I was also shocked that the ranking system did not start in the way I had hoped.

If you put the facts and interviews together, there will be a normal Elo ladder from the start. That’s fine at first.
After that, there will be seasons that will bring a big patch with them even after they finish.
I could imagine that it will be similar with Leauge of Legends or SC2.

I like that. Above all, it is good not to start this kind of ranking seasons until next year. The game will take a few weeks to do the most important hotfixes, balance patches, etc.

Imagine you start directly with the season and the ranking and reward system. It would lead to great frustration as the game will not be properly balanced at this point in time. So I think these steps are good. It is just a shame, as always, that far too little is spoken about it by the developers.