I think it would be very helpful if you were to add some additional information to the ranked search screen. I would like to be able to see the civilisations of the people you are queuing with as well as to be able to chat with those people to discuss civ picks, strategy etc. It would also be handy to know how many people are queuing at any given time. I’ve included a basic mock-up of what this setup might look like: 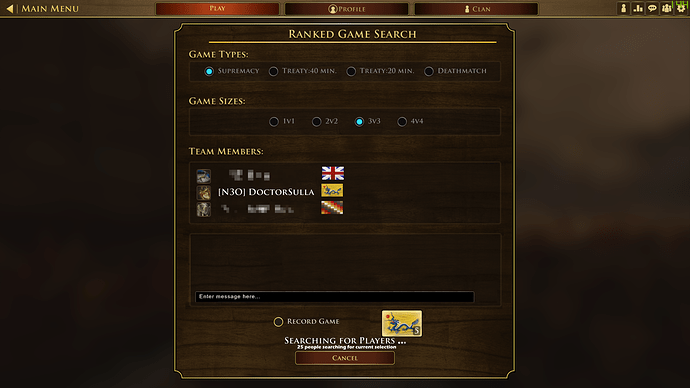 It would also be nice to have the more options with regards to ELO ranges but I can understand why you might not want to fragment search too much given the relatively low player counts at times.

Or just move the team ranked into lobby. Easier to implement.

Maybe create a separate team lobby from casual where you can’t select map but you can filter on minimum ELO to avoid kicking people out of your.game.

Another idea if you really want to stick with QS is it takes u to a waiting lobby where u can chat with other waiting players and u have a chance to change civs and allows u to leave before it locks in the players once it’s full.

But this system has to be strict in the elo range matching and also there should be an ELO penalty if the players are teamed up coming into the QS.