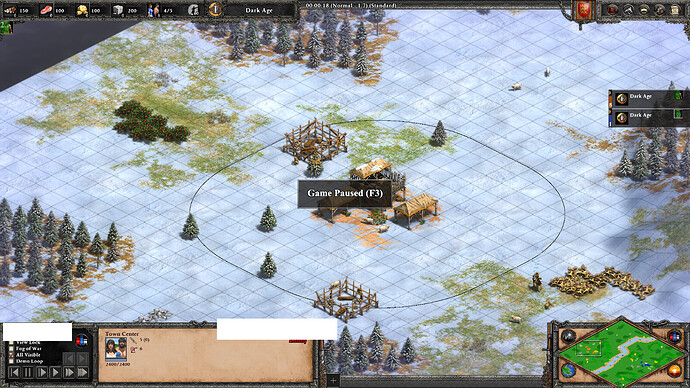 since im looking out for it again ive begun to notice how often resources are still placed in cardinal directions? something wrong with the map generation? my opponent has it a little bit, but mine is practially 100%: berries, boar, sheep, BOTH gold, BOTH stone all NESW

Generate a lot of this map (or Arabia) in Scenario Editor. And check resources. Scenario Editor may crash no problem. And then report this as a bug if resources bugged again. (I don’t think there is mode but you can disable to double checking that)

Generate a lot of this map (or Arabia) in Scenario Editor.

Why do you think it is bugged?

They just said that it will no longer exclusively spawn like this.

Sometimes it can still spawn like this, but not always like it was when it was bugged.

Ehm, what’s wrong with those resources? I can’t see it

a bug doesnt have to appear often

Well, it’s random map script. If it doesn’t appear often It’s not a bug because you know, It’s random" map script. So It’s luck. There is always "chance to be like that.

Your woodlines happened to spawn on diagonals. Since they don’t want resources to be trapped, they script the spawns to space the resources away from woodlines and other terrain anomalies. Since your woodlines were on diagonals it’s perfectly explainable why your other resources landed very close to cardinal NSEW.

Just because you get one map layout that looks a lot like the map resource layout we got used to during a bugged distribution era doesn’t mean it’s bugged. That just means the bugged script happens to also be a legal spawning arrangement (which of course it is) and has a chance of occurring naturally. Proving an issue of RNG takes thousands of attempts, not one screenshot.