As an ardent fan of all things AoE3, I am pained to see you guys keep reassuring the AoE2/4 folk that support for those games will last practically forever. Every update they get, there are promises of more things to come for a “long time”.

That is great for those games (and I play them too, so I’m definitely happy about it), but can we AoE3 folk get some sort of a roadmap also?

Somehow I (and many other AoE3 folk) always live in fear of AoE3 support suddenly stopping. And maybe a roadmap will help calming our anxious minds. AoE2 also got a roadmap and I hope we can get one too?

Meanwhile, I can’t wait for the special event and “more fun” and hope that means more content and new civs for AoE3.

Thanks for everything,
A big fan of AoE3 (and AoE in general)

AOE3:DE is the best game I’ve ever played. I play it almost every day and never get tired of it.

Agreed, I’d live if the game never got anymore updates, but it certainly is always nice

I don’t think there is a roadmap that could be released to public. In it’s core 3DE is a very old-school game. It’s far from being designed and maintained as a typical ‘game as a service’, and that’s on top of being just a remaster AND having new installment stealing (most) of the spotlight.

The closest thing to a roadmap, besides some rumors, are patch notes. At the end of every bigger update they announce what’s to come.
As for now there’s nothing special planned. Well… there’s is a special event, but that’s most likely 25yo event celebration:
A Special Event
More balance changes, more bug fixes, and more fun! 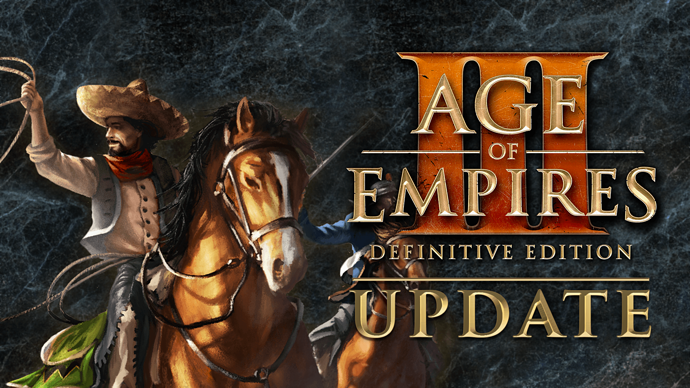 We got ‘Knights of the Mediterranean’ ~three months ago and I wouldn’t be surprised if that’s the last big expansion. We’re around two years of post-launch support, and they’ve done more than enough to show their dedication.
3DE could receive more stuff, as long as it generates money. And I’m not sure there’s any info about DLC sales.

More likely is one or two more standalone civs, in a fashion of USA/Mexico. Maybe something Middle-Eastern and classic European like PLC.

One way or the other it was and still is great game support and I hope Microsoft will allow them do something more, with 3DE or another title.

It certainly does always feel like we’re in a precarious position and not without good reason from past experience and now that the support has been so wonderful none of us want it to stop. Unless that support continues for the next five years it’s going to be a tough day when it does end not just because of the finality of it but the fact the game still has so much potential and room to grow.

We always get fatalistic when DLC is announced for the other games yet the devs always manage to quench our appetite as best they can. I love the fact we’re so hungry for more content and all we can hope is that it isn’t lost on the people in charge.

Don’t worry I think we will continue to receive content until at least 2025, as long as AoE 4 goes well and MS sees that we continue to play the games and buy the dlcs… I, if I can I buy all the dlcs that go out both for AoE 2 DE (the campaigns) and the 3 DE (the civs)…

I sometimes feel the same.
AoE3DE DLCs have so much more content then AoE2DE DLCs.

I wish they could find a way to make more AoE2/4 fans to try out AoE3DE again.
I think many never gave it a try or were disappointed by the release version.
AoE3DE is so much better now and brought back so many features that were always missing in AoE3 like Diplomacy or a large version of every map.

That’s why AOE2 DLCs are usually packed with a lot of campaigns.

The simple fact that AOE3DE is not the most played title is a good indicator that the world is not going right.

AoE3 doesn’t have a fun AI to play against.

Mostly Disagree. At extreme or hardest it’s pretty fun. Always could be improved of course

It’s unplayable at those levels.

In what way? What makes it unplayable

It just spams unrealistic amounts of units at harder levels rather than being more tactical. “Hard” difficulty creates units as much as a human player but it doesn’t use any tactics. I have even seen AI doesn’t use unique specialities of each civilization in a logical manner.

it has more resources but it never really spams more units tbh, it just waves at you which means if you are able to to take good fights its never a problem

With hardest and extreme they both get a handicap, to keep up with the player. if I recall this has been reduced recently as the AI was improved. The AI also uses different units depending on what your composition is. Different AI civs do play different, Russia rushs, as does Mexico, some don’t and go to age 3 instead.

This could all be improved of course. The dream would be no handicap and better kiting. But is a few steps up from legacy so far.

Have you noticed the “bug” where after destoryed some buildings AI will build two arsenals. Suppose to be sorted, but still sometimes does it.

I would rather the AI not kite tbh, the last time it did it split damage almost perfectly and instant kill basically any mass, it was scary

Have you noticed the “bug” where after destoryed some buildings AI will build two arsenals. Suppose to be sorted, but still sometimes does it.

not really, though I have weirder behaviour

I wish they could find a way to make more AoE2/4 fans to try out AoE3DE again.
I think many never gave it a try or were disappointed by the release version.
AoE3DE is so much better now and brought back so many features that were always missing in AoE3 like Diplomacy or a large version of every map.

Yes, it’s what there is…

The simple fact that AOE3DE is not the most played title is a good indicator that the world is not going right.

Can someone shed some light on this for me because I honestly do not understand why this game has the interest that it does, this is not a troll post. Every time I try to sit down and play this game, my interest is destroyed by the awful ai and troop point system and this affects not only skirmish but campaign. I made the mistaken decision to purchase the remastered version hoping that the system would be improved sadly it’s exactly the same.