I love games where all players take their time to develop their empire before rushing to combat. Right now, the meta dictates (in AoE II) that you rush to combat instead of developing (i.e. no one ever wins by building a wonder). What do you think the pacing will be in IV with what we’ve seen of gameplay so far?

If anything, I suspect that aggression will be an option even earlier than before, considering that we’ve seen scouts, spearmen, and men-at-arms used in the dark age portion of the gameplay reveal. 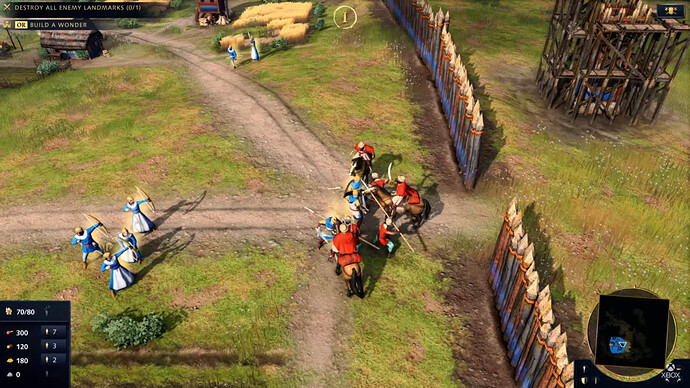 Personally, I like early aggression in PvP games. I understand that people enjoy city building, but I think it’s okay if that is saved for single player or casual games. I’d like some defensive playstyles to be viable in competitive PvP, and I think the new walling options will allow for that, but I don’t ever want to be in a PvP game and feel like I might as well be playing by myself.

That makes sense, and I’m sure most of the community shares your opinion and mine is much more suited to another game entirely, I just haven’t found that game yet.

The part that really makes me frustrated is how badly it snowballs. In medieval warfare if you extended yourself into your enemy’s territory and overtook some ground, you couldn’t just keep advancing and advancing as fast as you’d like like what happens in AoE, you would have to set up logistics and supply lines to keep your army advancing, so medieval armies on a true conquest usually moved slowly, giving the defender time to prepare. This form of combat was the norm until Sherman cut his supply line marching in Georgia during the Civil War.

I also know that’s the genre; it’s not meant to be realistic warfare, and there are great things about the pacing and playstyle that dominates the PvP space. I was just musing on if they might have played with the pacing a bit (from your post, it seems like they did, just in the opposite way lol).

I’m excited to see how a nomadic playstyle evolves a meta and if it’ll be used offensively (which seems obvious) or defensively (which is not-so-obvious, but I think could work).