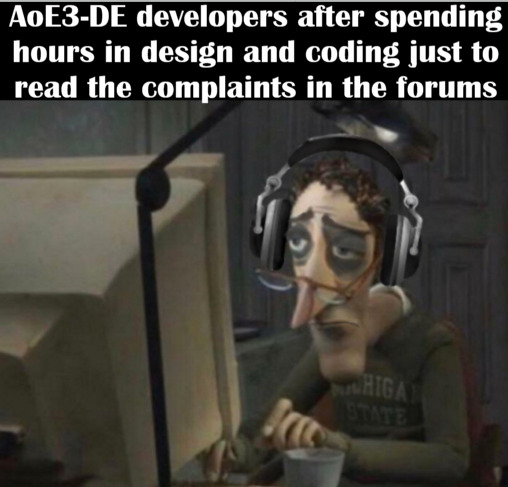 Keep up the good work u guys! Loving your work!

I thought the forums are overwhelmingly positive to the devs.

I remember buying the complete collection on steam in around 2017 and getting into aoe3 competitively for the first time, having only played around in skirmish and scenario modes as a kid when I played it on my laptop.

I’ve always said that I’d think you were insane if you told me a few years back that we’d be getting new Aoe3 content/balance changes on a regular basis, but here we are. It’s surreal and for all the flak we give the devs it’s actually remarkable to me just having people that care about aoe3 and are willing to put time into creating content for it officially.

I was a big fan of AoE2, but with the arrival of AoE3DE, this game became my favorite. I am very grateful to the developers for the great support they are offering to the product. Seriously, I think Relic has a really hard time competing with the guys at Forgotten.
My only problem with AoE3 is its single player mode: the campaigns are rare and historically unrealistic. I am Spanish and I feel that there is too much black legend against my country (and instead, nothing is said about the genocide that the British and Americans committed, or about the human sacrifices that the Aztecs and Incas made).
I would like that in the future, if they launch more campaigns, they say something good about Spain and other countries that do not have a leading role.
Anyway, I know that the main attraction of this game is its multiplayer mode, and in this respect I can only praise the work of the developers.
Many thanks!!

Negative people (and I mean talking about issues, not just mixed constructive critique feedback) are often the loudest, or maybe in better words- are the most visible/ stand out the most.
You go to Steam forums any given day and it seems half of the topics are about crashing and crashing-related issues (and that’s leaving aside that DX-Windows version drama).
I’ve played 3DE I think since release and never saw a crash once. Usually people don’t write unless they have a problem or want to engage with the community (but that’s a very small percentage).

I’m super satisfied and happy with the game. Even was when it came out and had some balancing and performance problems. It’s clear they’re putting a lot of passion and love to make it objectively better and bigger without losing the game’s identity.

Honestly, a sizeable chunk of negative reviews etc. at the launch was related to either v1.0 performance hiccups and /or some creative changes, probably dictated by some higher up, maybe even from MS- evasion of the term ‘colonization’ etc. But that’s a very minor part of the game and they’ve made up for it tenfold (if that’s the term, not a native English speaker ;P).

Outside of that- people were and are happy.

If devs like it, they can explain their development cycle. (SDLC)

So IFF they use a similar model, a very rough guess can be made:

That within each release cycle. They might have 3-5 sprints before next major release.
And each sprint can roughly have 5-10 working days.
These sprints have certain number tasks/coding/planning etc. that needs to be completed, within that particular sprint.

And after all those 3-5 sprints are completed the product(update) is released.

You can probably do some guess work how long each sprint or targets might be. And how things be scheduled and the workload. sounds simple but must be exhausting. Depends on their workstyle, but yea , work is work.

But within these time frames they also have to lookout for any live glitches into servers and regular maintenance also.

bro they take days,months no hours to solve 1 bug, and we gonna complain of course xD

How did you take me a picture 11

just because i think its the best.