I played Scandinavia a few times last night in 4v4s, I like the map a lot but quickly realized that the starting TC location are wildly unbalanced a lot of the time. Depending on the random spot assignments, one team (most often Team 1 I think) ends up being backed up way closer to the edge of the map than the other team, like 15-20 tiles, maybe more. 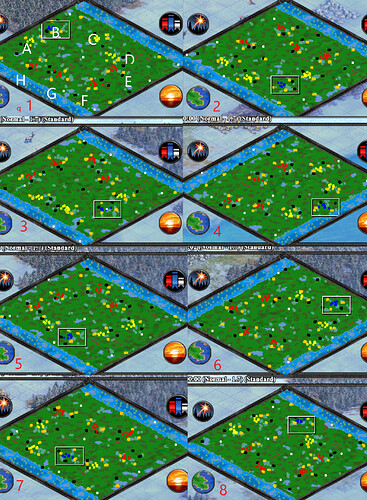 You can see that when the land goes from top left to bottom right (I’ll call this left-oriented) like in images 1, 2, 3, 5, 7, and 8, the players in the A and B locations have much less usable map space than E and F. If your teams ends up with H, A, B, C, you’ve already ceded more than half the map. Even the right-oriented maps (4 and 6 in the example) end up with about a 50-50 chance of being unbalanced like the left-oriented maps usually are.

While map control is certainly important, there’s definite advantages to spawning close to the edge of the map. It can certainly mean an easier walloff in a lot of cases. I agree, however, that if an entire team spawned in such a way it’d make for a small disadvantage.

That being said, this doesn’t appear to be a huge problem, at least among the ones you’ve presented I wouldn’t even consider that to be the most troubling anomaly in spawns, such as in 2, 4, and 7, where one team has a safe pocket literally in spitting distance of the river, and map 1 has what might be a cramped position on the left flank but the right flanks are practically sharing resources.

Seems like Scandinavia has some very awkward high-capacity map generations to my eye.

It can certainly mean an easier walloff in a lot of cases.

The map has such an abundance of woodlines that being close to the edge gives zero benefit. I’d guess that you could wall everything and never have more than 10 spaces in any one gap, with the majority of them being 2-5 tiles. There’s no reason not to be fully walled by Feudal lol.