'select all' command not working for stables

I have the same issue:

here is a workaround

I also have this issue. The select all thing works like 50% of the time but I can’t figure out what triggers it to work/not work

Same here, this issue is old. I do have problems with select all docks (ctrl + shift + d), I think Im using the default hotkey. Deleted all the game files (profile where hotkeys are stored) to see if that fixed the issue, no luck.

Just incase this helps, I think you’re experiencing an issue related to the market here.

Once a market is built, selected and then deselected the game seems to bind Ctrl+Shift+d to interact with the market, which then sells a stack of food without having the market selected. The same thing happens with Ctrl+Shift+ any of the other market buy/sell hotkeys.

Here’s a topic/post on this:

■■■■ really??? I had no idea! Are you saying I was inadvertently selling resources everytime I was using these key combinations? Is there a way to disable that? I didn’t see that in the key commands? I am gonna test this…

Once you have a market built and the ‘select all’ combinations stop working, yes you’re buying and selling resources using those key combinations. At least that’s what my testing concluded, perhaps it’s working differently for you?

I don’t think it’s someting we can disable (I’d love to do so myself!) and it isn’t recorded in the options/hotkeys menu as I’m 99.9% sure it’s a bug rather than a feature. I’m crossing my fingers for a fix at the moment as I’d really rather select all my docks than sell a bunch of resources!

The bug happens when the building that you want to select have the same (letter key), that some buy/sell action in the market. If you want to have a workaround for this bug, clear all the hotkeys of the market and it will be solved.

Ah ok that makes sense I’ll try this, thanks.

THANK YOU SO MUCH!!! it works, 2 months having this issue finally fixed

Isn’t it just conflicting hotkeys rather than an actual bug?

CTRL + SHIFT + V doesn’t work for castles for me. I can’t see any conflicting hotkeys.

You already cleared all this? 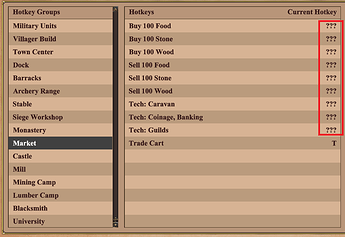 I’ve never set them to begin with. They are indeed all clear.