Everyone else having these issues? Game won’t start/takes forever to. Sometimes lobby browser won’t load. It’s been happening for weeks… I just wanted to play a quick game but I’m in a lobby that’s been “starting” for 5 minutes.

Yes, I constantly get no games when I search the lobbies.
If somehow I manage to join a game nobody joins or the game doesn’t start when everyone’s ready.
Not to mention multiple bugs introduced with last updates, already reported in the bug section.

This is a joke

Almost the 2 year anniversary of DE, and we have basic features of the game not working properly…

Last server update brought a new queue bug, you get some error saying “pollevent failed+random numbers” that is not alt f4, maybe after 3 more DLC they might fix the multiplayer, but you know what keep giving thanks for adding more civs.

It’s not the update. Isn’t it because of this?
The problems started the very same day the beta for aoe 4 started. Got worse the same day the beta ended. Maybe they did something to the system. I don’t know if it’s the real cause or what but I guess it’s related somehow.

How do you manage to break the game with every update? II - Discussion 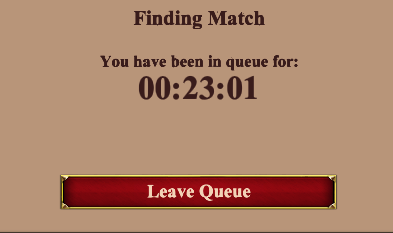 If all these problems are present since the dawn of the dukes dlc came out, I personally let me play a game as long as I exit the game and re-enter it all the time, I can’t play more than one game in a row, now It has been almost 3 weeks since this works like this and before the dlc I had no problems, I hope they solve it soon and it is frustrating.

Yes i played a one day tournament for like 8hours and 10 games on 12 than i played, they are at very least one problem wich make us to wait, and relaunch the game, recreating lobby numerous number of times which leads me and all the other player to make like 10-15min to JUST JOIN a lobby

While the tournement itself is very good , this thing exhausted me and the others players and it can be seen in gameplay where we were not really into it… So yeah before adding any dlc with add more civ with bad design or are just not necessary pls fixes the bug in first as a TOP PRIORITY

Guys that is all part of the plan.

Make the game unplayable so people will buy AOE4.