Share the craziest things that got censored in your chat

Thanks for this post, I hate this chat filter with a passion. I’ve opened a topic on it myself some days ago.

Same thing. “Come with me” to a teammate, meaning attack at the same time

“#### with me” - then you have to try to think of something else in the heat of the game and it fails…and then your army gets wiped 2v1.

No problem, it is crazy making!

I don’t understand why they didn’t just implement the same ping + chat system that LoL has. Their ping system is amazing, it eliminates most of the chatting I need to do in the first place. After that, I can uncensor chat in the settings and talk as I would normally without hinderence.

For shame. Just… for shame.

I’m a broken record at his point, but please devs, PLEASE get rid of this terrible chat block.

You tell me what he is going to (not) do…
Yeah we lost the game.
Yeah to Chinese.

whats the cussing in the original words? hahahaha i am missing something here

but it doesnt censor CHINA as it is a country, chinese is a bad word here. ROFL

They are Canadian… Of course they support censorship, totaliarian measures and mass surveillance for “the greater good”.

This has nothing to do with Relic (are they Canadian?) every AOE game has this problem they share the same chat filter. It’s been the same in AOE2 DE for years.

It’s annoying and unnecessary. It was optional during the beta and is no longer optional. Just revert that change, it’s that easy. There are plenty of other threads on this but it needs to constantly be brought up so that eventually someone gives a ■■■■ and changes it.

I’m being creative with my insults

“Your mother was a nerf herder”
“Suck a sock”

It’s kind of interesting though how normal conversation is censored out. It’s easier to use creative insults than it is to type an actual proper worded sentence…

Seems you can’t also mention the civilizations you can play in the game. At least, words derived from those civs. 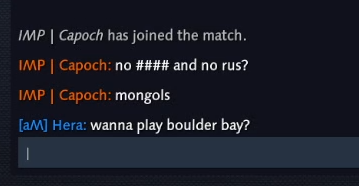 Can confirm that mong is filtered.

Damn your fanbase talking about pet food!
I guess it has to do with mongrell dogs which is a form of inbred but sigh, as non native to English it is hard to use chat at all…

Mong has another negative meaning which is nothing to do with mongrels. Never heard of this food one! Still shouldn’t censor the full word though/ we should all be able to opt out of chat filter.

No worries, also words as nude or its foreign translations cannot be used. You can’t even tell your allies to naked boom to imp age as a result

Like how are we suppose to communicate. There is only one lession we can draw here:

Don’t feel good. The censorship itself can cause more problems than swear words do.

I once typed ‘im fighting 3v1’ and it got censored

They actually censor my name. I have used my name (IGN is different from forum name) for +10 years and its censored in game so basically if someone types my name and its censored I have to guess if they typed it or not.

I think they use AI to censor context. We chatted with one person and tested all kind of stuff to see what was censored.

We found lot of different combinations that could be censored if they were added after initial word. They also censore different languages. For example Im from Finland and I tried some finnish word some rude and some not and they got censored.

I also contacted customer support regarding my name and why it was censored and basically complained this ■■■■ to them. CS responded “we’re sry but we don’t develop the game so all I can do is forward your feedback to developers”

You literally cannot use a single-letter acknowledgement. How could a single letter possibly be profane?! My best guess is this is to prevent people from bypassing the filter by typing a single letter at a time and presenting it vertically, but if they’re that invested in beating the filter then power to them. Add me to the list of people who would prefer there be no filter at all.