Should Certain Revolution Units Be Buffed?

There are two units that I believe are underpowered: the ironclad and the Gatling Gun. The Gatling Gun is weaker than the Organ Gun, with basically identical stats but lower HP; since this was the peak of gun design in the 1860s, it should at least be better performing than Organ Guns in some respects (I think better range and rate of fire make sense). The ironclad is inferior to the frigate and the monitor; it should be able to beat an imperial frigate in a 1v1 situation since it’s, you know, an ironclad. Ironclad technology instantly made wooden vessels obsolete (wooden warships got wrecked by ironclads in the American Civil war) and should similarly be able to dominate over even the most upgraded frigates.

There are obviously overpowered units in revolutions (I’m looking at you, Mounted Grenadaro), but it always bugged me that these pinnacles of technology aren’t sufficiently strong considering their role. These changes would make the USA revolution (whether or not that exists in a week) more viable in general and would make all revolutions more viable on water.

I dont think it should be stronger than the Organ gun, otherwise every European civ has the “same” unit as Portugueze unique one. Maybe make them a bit different. Like you said make them fire quicker anf longer but have less damage then the organ so they become about equal in damage but have different strength.

The ironclad is inferior to the frigate and the monitor; it should be able to beat an imperial frigate in a 1v1 situation since it’s, you know, an ironclad. Ironclad technology instantly made wooden vessels obsolete (wooden warships got wrecked by ironclads in the American Civil war) and should similarly be able to dominate over even the most upgraded frigates.

Frigates are essentially ironclads. IMO they are misrepresenting the unit for aesthetic purposes, but imperial frigates should be steam & sail hybrid ships with iron plating given the time period the imperial age matches with. Same goes for monitors.

The Iron clad we get from revolutions are not sea worthy, their battles have mostly been in rivers, and shallow lagoons in the US.

That being said, they should probably get a buff. I don’t think it will break the game too much. They should surely lose 1v1 with an imperial frigate but they should be able to take down 2 -3 caravels.

No.
There were entirely wooden Frigats for the longest time, and the upgrade for them is the Man-o-War, which was a wooden ship class.
There is no Imperial Frigate in the game.

The only ship that is misclassed, is the Monitor, because the Monitor was an Ironclad with a turret, and what the game shows us is a Bomb Ketch (Mortar Ship). 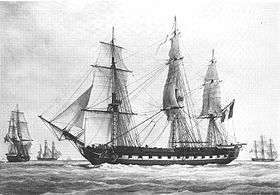 A frigate (/ˈfrɪɡət/) is a type of warship, having various sizes and roles over time. In the 17th century, a frigate was any warship built for speed and maneuverability, the description often used being "frigate-built". These could be warships carrying their principal batteries of carriage-mounted guns on a single deck or on two decks (with further smaller carriage-mounted guns usually carried on the forecastle and quarterdeck of the vessel). The term was generally used for ships too small to... 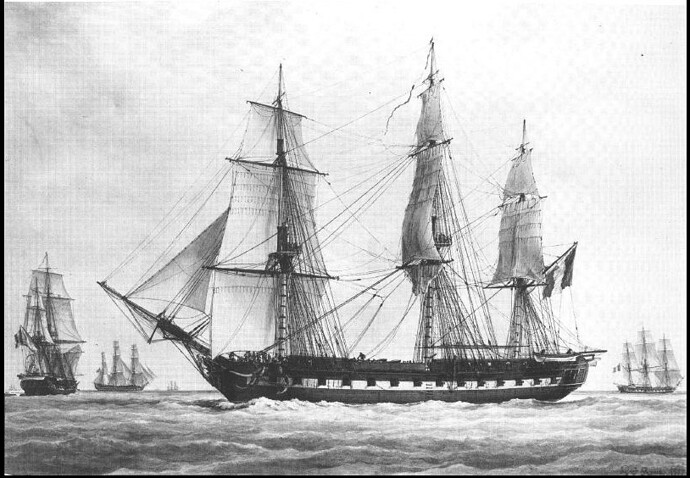 The man-of-war (pl. men-of-war; also man-o'-war, or simply man) was a Royal Navy expression for a powerful warship or frigate from the 16th to the 19th century. Although the term never acquired a specific meaning, it was usually reserved for a ship armed with cannon and propelled primarily by sails, as opposed to a galley which is propelled primarily by oars. The man-of-war was developed in Portugal in the early 15th century from earlier roundships with the addition of a second mast to form th... 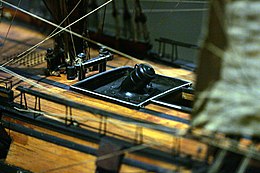 A bomb vessel, bomb ship, bomb ketch, or simply bomb was a type of wooden sailing naval ship. Its primary armament was not cannons (long guns or carronades) – although bomb vessels carried a few cannons for self-defence – but mortars mounted forward near the bow and elevated to a high angle, and projecting their fire in a ballistic arc. Explosive shells (also called bombs at the time) or carcasses were employed rather than solid shot. Bomb vessels were specialized ships designed for bombarding (h...

A monitor was a relatively small warship which was neither fast nor strongly armored but carried disproportionately large guns. They were used by some navies from the 1860s, during the First World War and with limited use in the Second World War. During the Vietnam War they were used by the United States Navy. The Brazilian Navy's Parnaíba is the last monitor in service. The original monitor was designed in 1861 by John Ericsson, who named it USS Monitor. They were designed for shallow waters an... 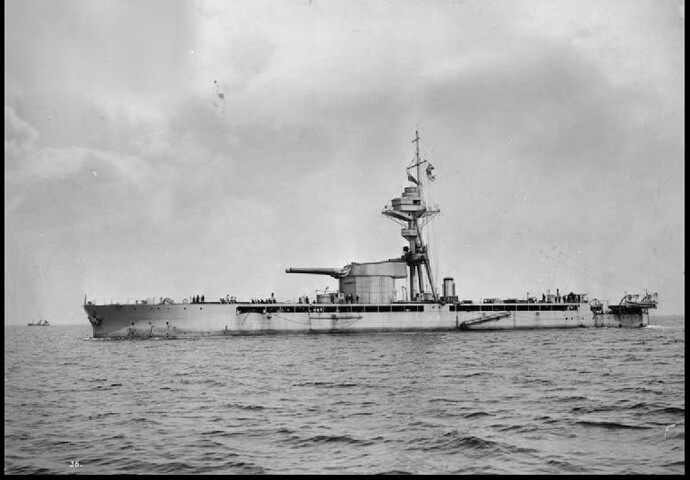 As I said, Frigates in the game are misrepresented, they are an anachronism in the industrial and imperial age. They should be fully iron plated ships, like these: 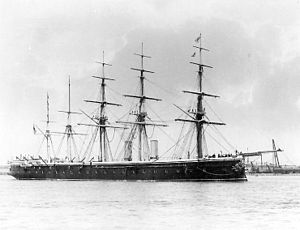 The Minotaur-class ironclads consisted of three armoured frigates built for the Royal Navy during the 1860s. They were enlarged versions of HMS Achilles with heavier armament, thicker armour, and more powerful engines. The ships of this class were unique among ironclad warships in possessing on completion five masts, named fore-, second-, main-, fourth- and mizzen-. They were originally intended to mount forty Armstrong 110-pounder breech-loading guns on the main deck, with ten more on pivot... 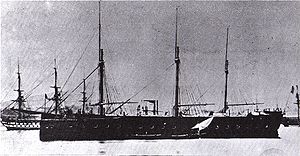 The French ironclad Gloire ("Glory") was the first ocean-going ironclad, launched in 1859. It was developed after the Crimean War, in response to new developments of naval gun technology, especially the Paixhans guns and rifled guns, which used explosive shells with increased destructive power against wooden ships, and after the development of the ironclad floating batteries built by the British and French for the bombardment of Russian forts during the Crimean War. It was designed by the Fren...

You start them up in the fortress age, when yes they should be wooden sail ships. But in the industrial age there’s already steam and iron plating available in the game (you even have an upgrade at the docks for that). There is a very little time difference between steam trains and steam ships, and it makes no sense for frigates to still be wooden sail ships in industrial age.

So if we wanted the frigates to be historically accurate, they should have both steam engines and sails in the industrial age. We could call them “armored frigates”.

Their stats and firepower really match those of the late 1860 ships, the game simply didn’t give them a new model.

As I said, Frigates in the game are misrepresented, t

They are not, because they never upgrade into Ironclads, only into Man-o-War, which were also wooden ships.

The Frigate was never meant to be anything but a wooden ship, and it is correctly classified, because the first Frigates were wooden, and the devs renamed the Imperial upgrade precisely so they would not have to make another model.

The only incorrectly named Ship, is the Monitor.

they are an anachronism in the industrial and imperial age.

I disagree, which is why the Caravel and teh Galleon also do not ahve Imperial upgrades, precisely so theyb would never represent late 19th century navies.
The devs clearly wanted the only metal ship to be a Revolt send-in.

The devs clearly wanted the only metal ship to be a Revolt send-in.

Doubtful. The ironclad was in the original game as well, where the only revolutions were the American revolutions, which are literally the only time those “ironclads” were ever used. Once the revolutions run their course, the surviving ships were either scraped for metal or turned into museum ships / bars / etc. Those ships bore little impact on the evolution of ships and sailing in general, they were never sea worthy due to their weight, limited space for supplies and general unpleasant place to live in for long times.

There’s also an upgrade in the dock called “armor plating”, since armor is metal/iron, this clearly shows the devs recognized the historical inaccuracy of wooden ships in the game time period, but they simply did away with that for aesthetic reasons.

Sail ships were simply a staple of colonization, which is what the game was originally about, so they simply made frigates a sail ship.

BTW, the frigate ship class is by far the most successful throughout history. Frigates have had several shapes and sizes, there’s even modern day frigates with modern engines. So claiming that frigates are sail ships only is factual inaccuracy.

Ships of caravel and galleon size were still active in the steam age.
Personally I would have liked to have an industrial age upgrade which equips all ships (except fishing ofc) with steam engines on top of the sails, and grant them extra speed (for balance purposes, the sail ships speed would be nerfed accordingly).

I understand that the ironclad is a hybrid between the frigate and the monitor, but with less statistics than both. If it’s okay or not, I don’t know. And the gatling gun, it would be nice to polish it up a bit like you say.