Should infantry be the only units who can build Battering ram?

If one specific unit (and not a variety of foot soldiers and no buildings at all) were the only means of creating a Ram, I could get used to it.

From my understanding you can’t build rams or towers out of the siege workshops? 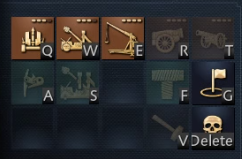 Only infantry can do it. And only with an upgrade.

That helps. Thanks. I either misremembered or accidentally remembered something old.

I still think it should be further limited to one unit. But this helps.

Yeah, would be cool if say only spearmen could do it. This would also encourage players to use them more often.

Infantry has always felt underwhelming in their uses. Sure, they can be cost effective, and spears are as good of a counter to cavalry as always. But there’s never really been a “wow” factor for going infantry in any of the Age games. (Perhaps the Goths spam being the only exception.)

At the same time, the early meta is showing that all-in battery ram pushes are very strong. Often, the battering rams are built by archers, who can also pick off villagers that come in to defend versus the rams.

So, why not give this strong abillity of building rams to Infantry only? This would a) indirectly nerf the battering ram strategy a bit, and b) give an additional and unique reason to go for infantry.

Sounds like a good idea to me. Infantry need something to make them feel more useful in the game. Archers are already good enough without the ability to build siege.

Maybe some unique civ could also have a tech that allows infantry to build any siege weapons. That would be really cool.

Oooohhh. That would be cool indeed. Though, probably not the cannon-type siege units. That feels off both in terms of flavor and history. But there’s still a lot of room for unique civilization designs.

I would als like to see more uses for the siege towers now that they have been brought up. I think we can all agree that siege towers are cool, and used in historical sieges to boot. But in the game their only use seems to be to scale walls. Breaking walls seems to always be the better option, since if the walls don’t have gaehouses or towers in them, your units are stuck on the walls.

My first thought would be if the siege towers could have a small area around them providing a stealth effect to units. That way, you could sneakily transport units over a wall, without your opponent noticing it right away on the mini map.

Sorry for the off-topic. But yeah, buffing siege towers, and having infantry be the only units that can build siege towers would help buff infantry as well.

No need for that. It’s an unorthodox design choice and I was just curious. Thanks for your response!

Think of how much more the civ design would pop if they gave the ability for a unit to train Rams to maybe one civ and the ability for a different unit to train Siege Towers or something else to a different civ. And then if they gave yet a third or fourth civ one or two other unique mechanics. If they kept that up and strung enough of these together, we’d actually have asymmetric civs.

Presently in AoE4, the ability for all those identical units to train all those identical siege units in every single civ completely waters down the promise of asymmetric civs. It may be a little more complex of a design, but it sure is just as symmetric as anything else in the game.

Agreed, but only to a degree as I see this a matter of priority. If you feel like a design is particularly strong or interesting, it is common for designers to try to get as much out of it as possible. Probably common sense, and not particularly surprising. Good ideas are like a resource and depending on your vision and your priorities you are going to spend it where you want to be at your best.

In this case, as with other ideas in Age4, I feel like the designers made a conscious decision to add a relatively novel mechanic and some depth to the whole game rather than using this specific resource to add to the (perceived) asymmetry of civs. Now you can naturally argue that making civs more unqiue will also add depth and identity to the game itself - and you would be correct - but you also limit this specific mechanic to a fraction of your playerbase. At least for one specific moment in time as you can only play as one civ at a time.

Obviously this is just a simplification of a fairly complex decision making process and I might be completely wrong on their design intentions. This is just how I interpret this particular design in the context of the choices that have been made so far.

Also, as others have pointed out, there is actually some variety in siege weapons. As far as we know at least 6 out of 8 civs can have infantry and archers build rams and siege towers. 5 of them need to research siege engineers first, while one starts the game with this choice unlocked. Not all civs have access to all siege weapons. There is also some admittedly small variety in the siege engineer tech itself with a single civ being able to use units to construct Springalds and Onagers. I see this as a decision to limit some options for the sake of variety and asymmetric civs, while trying to make sure the siege engineering mechanic affects all players at all times (almost) no matter what civs they chose to play.

Yes, it looks like we agree that the more variety seen in this mechanic the better and are now in that epilogue stage of the discussion where reasonable minds each identify that they prefer different things.

I am glad these civs bring you the joy you seek. We all need joy in our lives. Fortunately, I have found my joy, though it lives elsewhere haha

Abasid Dynasty Infantry can build Mangonels and Springalds in castleage - without even the need to upgrade the siege engineering in the blacksmith. Thats stronk.

Also, that castle can create all units in AoE4 is actually an english Civ trait and not the norm and for that i like it tbh. Castle on its own is not as strong as in AoE2, but english Castles with the network of citadel bonus to consolidate a position is nicey and works rather good.