Some suggestions to balance lakota in 1v1

Lakota now is top 0 civ in ladder since last patch. And here is my balance suggestions:

Compensation: give age 1 4-villager shipment back because of the initial crate nerf.
Dear DEV balance team, please consider about these suggestions. THX!

Reduce teepee eco aura from 12.5% to 7.5%. Teepee eco buff in early game is too much compared with French consulate which only has 5% eco buff.

native civs dont get age 2 market upgrades though so that is basically required for lakota which have a lot of high cost units.

the other civs all have other eco options (haud can go water easily, aztec have back to back shipments and the war priest, inca has kancha) or more fitting military options for age 2, lakota need high cost cav.

they are also space constrained unlike the french consulate which is global.

They can add some upgrade tech in teepee. The initial 12.5% is too high in early game

The Lakota don’t have anything but an early game. You nerf that early game, they become useless because there’s not really a way to balance out a late-game for them without changing their economy from the ground up.

Which we all know the devs won’t actually do, as they don’t want to upset the playerbase by essentially removing an entire civ and replacing it with something new.

Would be a good way to balance it through shadow tech without affecting treaty. However, the aura needs to be like +30% or even higher for imperial cause Lakota is dumpster tier late game/treaty.

This is the winning percentage as of yesterday’s game 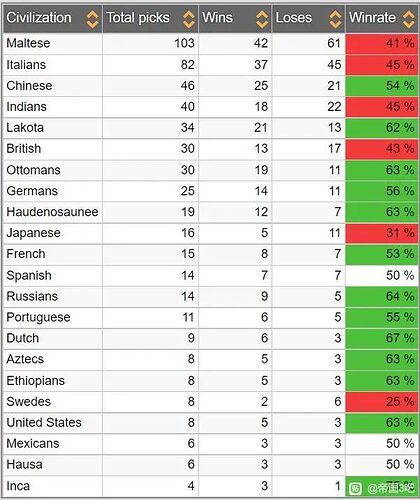 with only 100 starting wood, the teepee is effectively them getting getting cheaper hunting dogs in the early game which is a decent bonus for losing the 4 vil card

bUT jAPaN iS tOo oVeRpoWeREd anD nEeDS tO bE nErfED

That shipment should just make the upgrades more affordable: Veteran is free and the champion is cheaper.

Even with 1000c it is extremely powerful specially because there are Age IV cards that deliver less than 21 units and cost 1000c and only upgrade them to veteran level (a few minor civ cards) or just give the units a slight buff (native- american merc cards).
1000 coin for 6 upgrades and 21 units is absurd.

Look at the win rates and the type of civs that are dominant. They are all fast rush civs that can easily role civs like Japan and British. This doesn’t mean that Japan is weak only they are too strong. If you don’t do a rush on Japan you get beat.

The solution is simple, they add a new civ to replace the old lakota with.

How do you explain dutch then?

Dutch has a very strong defense and are not terribly slow.

I think introducing the Cheyenne or the Shoshone as early raiding civs would work well, and it’d allow the Lakota to take on a completely new playstyle, since the Seven Fires were rather the outlier in military tactics on the plains.