I find the Hotkeys menu is pretty overwhelming and think it needs a re-vamp to help its usability. The large font size leads to very little info showing per screen list, relatively speaking. And there are several hotkey groups to weed through. A smaller font size would be awesome!

Adding options for small, medium, and large font would be helpful. If I had my way, I’d just want small font size, of course; but I know some want/need larger than me. Thus, choices.

Additionally, it could use a Search field:

A reverse-lookup Search capability would be nice, so if you search for “A” it would show things that are assigned to “A”, but also CTRL+A, SHIFT+A, etc. since those have “A” in them

A filter to show what keys are not assigned would be a nice-to-have, but not as critical. I’ve seem some programs do this and it can be very helpful. Since AoE has so many hotkeys, such a filter could come in handy to know what hotkeys aren’t already bound to something


Currently looks like this. With a smaller font size, you could probably have a list showing twice the amount of hotkeys at once as this: 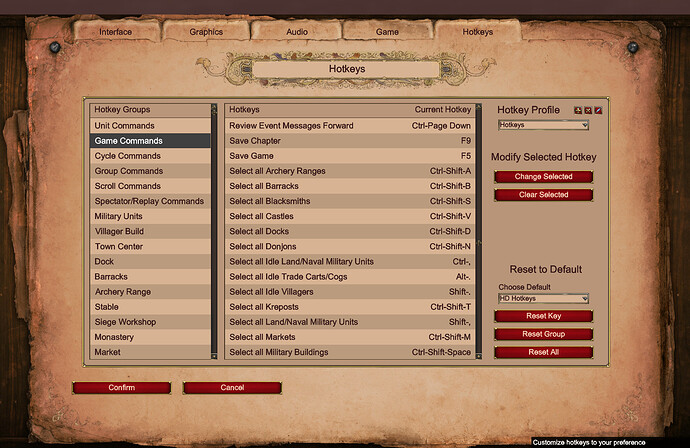 Some screen space optimisation would be appreciated. The ability to delete/unassociate ALL commands would be amazing as well (having to delete them one by one is a pain in the trebuchet). The same thing should be done to Age of Empires I: Definitive Edition.

A way to save your hotkey prefs, too, for easy loading in the future, or to switch between others without losing your customizations.

If that is what the top-right icons related to Profiles aim to do, it’s unclear/not intuitive. I’m afraid to use them in case it deletes any customizations I’ve made on the current profile, etc.

It is. Profiles are synced through Steam cloud. You can always rename your current profile to whatever more identifiable to you.

Thank you, @PilgrimHYR! I’ll give it a whirl.

I’m hoping maybe someday the screen can still be updated to be more intuitive… because a year from now, I may not remember this particular conversation

maybe someday the screen can still be updated to be more intuitive… because a year from now, I may not remember this particular conversation

I too would like to play the game when alzheimer knocks on my door, so before I die, I hope for a more intuitive interface (not just the hotkey editor)

I too would like to play the game when alzheimer knocks on my door,

It’s less about Alzheimer’s, and more about we have more important things going on in life than to see if we can remember what vague, non-intuitive icons mean in the upper-right corner of an AoE screen one year from now, let alone five. I’m learning some things on the side, and recalling unclear non-intuitive AoE quirks like this is at the bottom of my brain’s priority list at the moment

I also have more things going on than wanting to test my memory to see if I can remember one post out of thousands that I’ve viewed and participated in years from now.

User interfaces that make intuitive sense and have clear explanations when you hover over buttons in them should be strived for. UIs shouldn’t be puzzles to figure out, imo, unless it’s in the context of a puzzle game