Having played the game for several months, I noticed that the Custom Game screen could be improved a little bit more, by adding an “Infinite” resources option, like in Age of Empires 2: Definitive Edition. I feel like the “High” resources setting does not grant enough of them, and it would be nice see both real players and AI fighting without resource limitations! 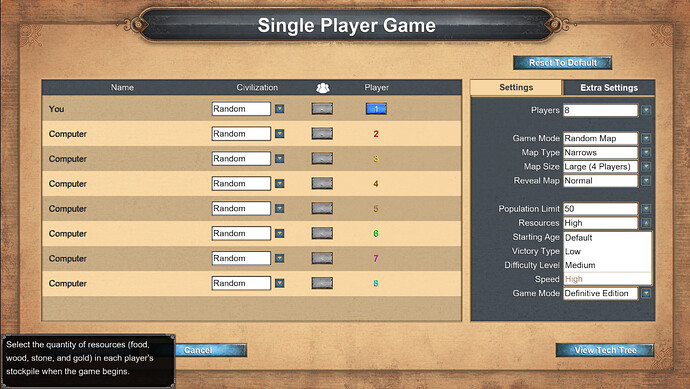 Please! Give us infinite resources option!

Plenty to fight directly but not enough to not do any eco. (if the fight last)

Try using steroids cheat, and you’ll quickly notice that amount of resources is not enough

This feature would be great for civilization and strategy testing. I mostly want it for fast and action-packed matches, though

Yeah including that option would hardly hurt anyone. No reason to not have it. I don’t think it would break the engine or anything. Unit limits etc. are still in place.

Since population would still be limited, that won’t be an issue

Just making a post here so this thread does not go unnoticed. What else can we do in order to caught developers’ attention?