Suggestion: Order timeline by team instead of player number

I mostly play team games, and my teammates and I like to look at the timeline afterwards to figure out when the turning point in the game was. Here is a random example from my screenshots folder: 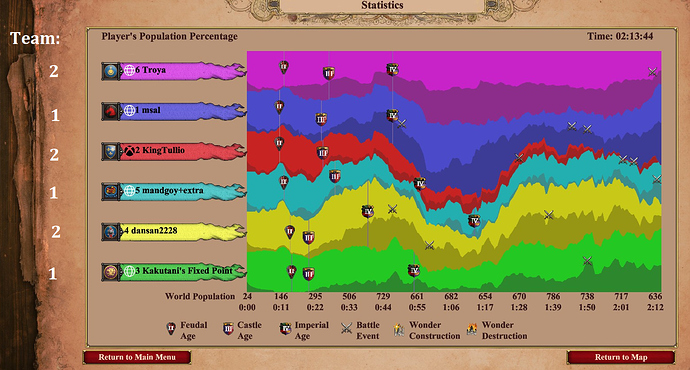 You can tell at a glance that each team has a player who is getting squeezed. But you can’t tell very easily what the net effect is or answer a question like “who is winning in the midgame?”. If instead this were ordered team 1, team 1, team 1, team 2, team 2, team2 then you could just glance at the line separating the bottom team 1 player from the top team 2 player and instantly see which team had the higher population at a given point.

I don’t have the photoshop skills to switch around the players, but pretend the same game had different teams:

You could instantly see (by looking at the line between teal and red) that the bottom team was losing mid game and then recovered and reached parity at the end game.