I am posting to try and start a discussion of balancing the tech between civs. We know how unbalanced water was because of the tech discrepancies. Seige tech is the next balance issue in this area for me.

English for example does not get the Culverin tech, while Malians do. They obviously aren’t following historical accuracy here giving an African civ more cannon tech than English and it puts English at a significant disadvantage to controlling siege fights. Just like water, when civs don’t even have the tech to counter the units in front of them it isn’t even a fun game at that point. Springalds are not a counter because they take 3 to kill just 1. The main reason this is not a counter because of the supply cap. I have to commit 9 supply to kill their 3 while they have other 6 more supply available in their army. Pop cap and army composition plays a significant role in late game team fights. It is impossible to argue that having 9 supply in springalds is an effective unit comp.

I am asking simply that all civs have the culverin tech so the game is fair.

French get access to both through their landmark. But, otherwise, civilizations get either one or the other–some get neither, and some have their own siege.

Usually you can claim Historical accuracy matters. Or coolness factor. But, AoE4 seems to have gone for apparent balance over either, civilizations that lack these two units either make up for it with their own siege units, or with a very different playstyle like mongols. The french get a special landmark to acquire a better version of both. English fall under the category of having either Culverin or Ribauldequin for balance purposes over historical reasons or just coolness factor.

I don’t think you can really claim siege needs a rework as water did. While ships exist in their own little battlefield on the map, Siege can always be dealt with through other means (albeit less efficiently). That lesser efficiency is usually made up by other factors of that civilization, and so, can be balanced together to make up for it.

The reason water had to be dealt with the way it did, was because of this great disconnect in game play. They were originally designed with the idea that a civilizations economical or technological bonuses would balance out the weaknesses in water–and although true (and still is), that did not translate as strongly as it should have because many benefits like stronger land units, simply could not be translated into the battle in water. This is why a measure was taken to more directly figure out the water rock-paper-scissor situation.

Siege on the other hand does have much more happening than simply siege itself. It exists in the ecosystem along with knights, man at arms and many other units that can contribute in destroying or guiding them. For instance, the Ribauldequin, while a more situational unit, it is unparalleled at guarding other siege from melee units, shredding anything that comes close. That is your strength by having it accessable. Of course this means you need to overcompensate with the lack of Culverins by creating even more springalds, but that means if your opponent is unable to deal with your springald massing, they will be forced to deal with your siege with their melee units–at which point, your Ribauldequin would keep them safe and lead you into victory.

Everything has a trade of. I understand your frustration, but I think you’ve arrived at conclusion that isn’t necessary. Try to look into what benefits your civilization has instead of looking into arbitrary reasonings like historical accuracy, and try to capitalize on those benefits against your opponent. And hey, if you like the Culverin that much… play a civilization with one.

As far as I know, other than balance, I think the creators wouldn’t rule out a cannon type of unti if the civ has “sentimental” value to that specific type of cannon in their story.

Now about the “culverina” itself, there is an etymological problem with its use and conception: the first “hand-cannons” were called culverinas, only after a while did they realize that these culverinas could make them bigger if they stopped being " hand-cannon" and began to use them as long-distance artillery. Therefore even in historical records where it mentions that some civ used culverines or not, it is not clear if they did it as a “hand-cannon” or as artillery, from there they can be grabbed to make it an optional weapon
On the other hand and as I mentioned before, unless the civ has had a historical battle where a cannon of a specific type saves the day, and they don’t include it in the civ, well, then it’s wrong, unless this cannon goes too far out of line time of the game (say, maximum 1650 AD with only a few exceptions).

In the case of the Portuguese, if they are released as a civ in the future, hopefully AND I HOPE they don’t think of making them a “ribaudoquin” civ. Portuguese users have mentioned it several times in almost all Age forums, that Portuguese “did not have ribaudouquin as their favorite weapon”, much less as a protocol weapon. There are “no famous” battle won by Portugal with those weapons. It is true that it is mentioned that the Portuguese weapons fired bullets in the form of shrapnel, but that is because they used “espingardas”, and fragmented bullets, or “grape shot”.

Doesn’t the French getting it make it unfair?

It is that the French have written in their history that they were “experts” in the use of cannons, they were the first to convert hand-cannon “culverins” into siege “culverins”. They were so fond of the weapon that several sieges against the English in the last stages of the 100 Years War were won by heavy artillery, or handcannoners.

On the other hand, there is also a record that they used a ribauldequin against the English in the 1338 raid of Southampton. 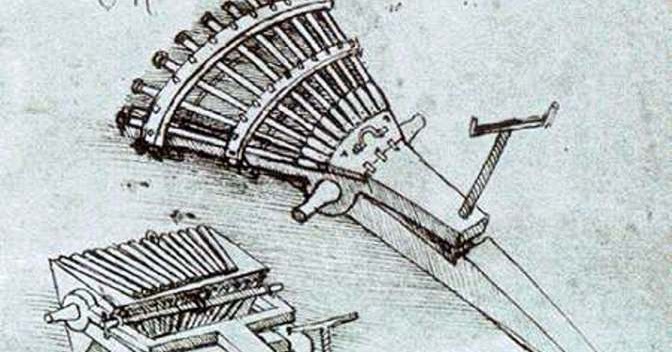 The History of Saltpeter - VIII

In today's post, we will cross the Atlantic and take a look at the history of saltpeter and gunpowder trade in England. We know that gunpo...

There are also many ribauldequin kept in French castles. This is one in the Château de Castelnau.

On the other hand, the French prefer to use the term “orgue” to refer to this weapon (from “orgue gun”).