This video by Hera basically sums it up; Teutons aren’t good at anything.

Because of these two points, it’s a civ with average infantry (its specialty) and no reliable way (except expensive onagers) of effectively dealing with the abundance of powerful archer civs.

Why I think this is fair: Mobility of infantry is still the main issue here so it will still always have archers to contend with. The idea is that the infantry are just a bit more durable and can be a bit more useful as a damage sponge for archers. Considering their lack of bracer, I figured this might be the tanky, well-armored Teuton’s way of dealing with it. Which brings me to the Teutonic Knight. With this bonus, it would be a bit less of a joke with it’s super-snail speed if it took a concerted effort to bring it down. At the moment, it seems to die to archers just as easily as any other infantry, so perhaps change that to make it notable for something?

Don’t know whether this would be OP but I figured it’s worth a try. I would love to see the resurrection of this infantry civilisation.

If your goal is to make Teutonic Knights more usable, this will have the opposite effect. They exist pretty much in complete competition with champions, with the champion currently being the more effective choice. If you buff them equally, the cheaper unit will gain more then the more expensive unit, so the net result will be less usage of the Teutonic Knights.

I also fear that this would go much too far. Champions currently exist in a very slender niche. They are countered by Cavalry but only barely; even the Teutons current plus one bonus is enough to make their Champions trade cost-effectively with enemy paladins, and plus two would make them a solid counter.

Archers, as well, are only barely a counter. With Squires, Champions actually move faster than archers. the Goths get substantially cheaper Champions, but also miss out on a full three Pierce armor. These would cost full price, but would be far more effective per unit, achieving essentially the same effect.

Your suggestion would create a unit that counters Cavalry, archers, and infantry, as well as all trash.

So, the net result would essentially be Goths 2.0, and I think everyone can agree that of all the things we want, it certainly is not that.

Just have TKs benefit from Sanctity and Fervour.

Also wouldn’t fix anything. they will still be less effective than Champions, with the added benefit of being locked behind an additional two technologies. Nothing like making the already crappy unit more expensive!

They would be much better than Champions at killing Champions and Paladins, not to mention that they would have some movement speed.

Who in their right mind is going to try to kill Teutonic Knights with Champions or paladins? Nobody, that’s who. Meanwhile, they will remain far less effective than Champions at destroying buildings, and against archers, two actual realistic matchups we might expect to see.

All your suggestion will do is make them more overpowered in Noob games while even less effective, if that’s even possible, in more experience games. Which is the exact opposite of what people want. Teutonic Knights are already overpowered in noob games.

Go and test it out and say how it feels.

Okay thanks, will do!

I am nowadays playing with Teutons as ally against Hard AI. My teutons ally almost always destroys the enemy AI. I think teutons are fantastic. I am always in support of buffing them even more. I don’t mind

While you’re testing those TK, you can test mine version of balanced TK
https://www.ageofempires.com/mods/details/14611/

I think people are underrating the +1 melee bonus, sure it’s not fancy like Celts, Japanese and Burmese bonuses but it’s not useless at all. It allows their halb to survive 1 hit longer against the paladin and get another hit making the halbs more pop efficient. Also two generic champs lose to 1 paladin but Teuton champions win (yes Viking and Japanese do this more efficiently). Imp camel beats a generic halb leaving with 68hp but against Teutons, they only survive with 28hp

Your armor bonus is too broken btw. +1/+1 in feudal is a lot and later becomes a better Malian bonus

Oh, wow. I didn’t know mods could also change civ balance. What an invaluable tool for researching balance changes! I should also learn how to use the Advanced Genie Editor. It even comes pre-packaged with Definitive Edition.

Yeah I figured I might have overcooked it a bit here. So would +1/+1 still be OP? If not, how could they perhaps buff the Teutonic knight so that I have a good reason to use it? As the champion is much more cost efficient.

Yeah I thought I overdid it a bit, I wouldn’t mind just a +1/+1 buff. But how would you buff the Teutonic knight so that it doesn’t feel quite so bad?

Archers, as well, are only barely a counter. With Squires, Champions actually move faster than archers.

That’s not true, the only time archers are not a solid counter is in feudal age until the archers get to the mass where they two volleys kill the m@a. Crossbows and arbalests also shred the later swordsmen owing to the mass and more range. In my champion speed TK test, TK did okay against archers but they still remain a good counter.

Meanwhile, they will remain far less effective than Champions at destroying buildings

How? They get the same bonus. I’m guessing speed

Which is the exact opposite of what people want. Teutonic Knights are already overpowered in noob games.

What? No they’re not

If not, how could they perhaps buff the Teutonic knight so that I have a good reason to use it? As the champion is much more cost efficient.

I think we’ll just have to make them champion speed and see how the meta responds, with a tweak to the creation time since they create crazy fast right now and it’d be OP with champ speed

That’s not true, the only time archers are not a solid counter is in feudal age until the archers get to the mass where they two volleys kill the m@a. Crossbows and arbalests also shred the later swordsmen owing to the mass and more range. In my champion speed TK test, TK did okay against archers but they still remain a good counter.

Have you actually tested this claim? Because spoilers, it’s not true.

Arbs cost 45 gold and 25 wood, for a total of 70 resources. Champions cost 45 food and 20 gold, for a total of 65 resources. (Note that this is assuming all resources are of equal value, which is totally not true in later ages, where Champions are realistically far cheaper.) Put equal numbers of champions up against arbs, at max range with no meat shield between, and the champions will absolutely wreck them. There’s no really even any contest, they survive with around half their number. Assuming equal micro from both sides(IE, the champions don’t just mindlessly chase from one direction and block each other), the champions have a strong advantage.

How? They get the same bonus. I’m guessing speed

Champions, due to their lesser cost, get twice as many units, and therefore twice the attacks and twice the benefit from Arson.

Buffing Teutonic Knights to champion speeds is absolutely useless, because they will still be unable to engage the units they most effectively counter.

Oh, and Teutonic Knights are actually substantially less effective per-cost than Champions against archers. Archers kill TKs in 25 hits, versus 28 for two Champions, and two champions do substantially more damage, as well.

Buffing them to equal speed would fix absolutely none of their problems, while simultaneously destroying their identity. It’s basically the worst suggestion ever, it fixes nothing while breaking everything.

Go and test it out and say how it feels.

~ Kiting with Arbalester ~
First test was with 34 Arbalesters, for one-hit kills, vs. 20 TK’s. The critical mass with Arbalesters annihilated the TK’s. The TK’s still got a few good hits in, but the victory was very one-sided. Second test was with 20 Arbalester vs. 20 TK’s. This was a lot tougher, and I lost half of the Arbalesters. Mostly due to the Arbalesters reforming in a column when I gave move orders that walked right into the middle of the TK’s, instead of staying in the flat line they formed when I gave attack orders. Despite the heavy losses, it was a very, very, cost effective fight at 250 wood/450 gold lost vs. 1,700 food/800 gold!

Overall the buffs make the Elite Teutonic Knight a little better at pushing lower numbers of Archers. But they’re still horrendously cost inefficient at doing so, and that’s before the Teutons player still needing to invest yet more resources into support units. Also, supposing an Archer player is that late into the game with lower Archer numbers, you’re probably ahead and shouldn’t need TK’s outside of flexing.

If there is a solution, I don’t think it can come from small tweaks, but by radical changes. For me, I can imagine a Teutonic Knight stat overhaul that makes two Teutonic Knights functionally similar to one Battle Elephant, however that might look like. Screenshot (14)1920×1080 1.3 MB
and more like this, since the arb player has more window for micro and all the champion player can do is micro to flank the arbs. Sure, the arbs are no mangudai but they can still do the stop button kiting mechanic and it works for minimum casualties 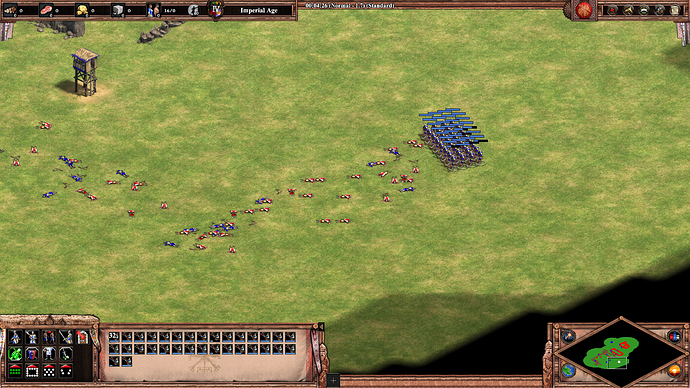 Screenshot (12)1920×1080 1.29 MB
And lastly, archers are cost effective in the sense that they need less often reinforcements, they’re easier to protect with trash and siege, with champions you’ll realistically have to make over 100 over the course of a 1v1.
Regarding TK, you’re forgetting about pop cap and pop efficiency. You’re realistically not going to have over 60 of them and nor are you going to take down castles with them unless you’re in that dominant position.

Buffing Teutonic Knights to champion speeds is absolutely useless, because they will still be unable to engage the units they most effectively counter.

They’ll have to engage when the TKs actually threaten the base, which with their new speed, they will. They can engage with trash units much better, nobody gives a ■■■■ about their identity because its designed to make them useless and weak and with mentality like this, its sad they will never be good

the Goths get substantially cheaper Champions, but also miss out on a full three Pierce armor

Did the Goths and Tatars merged 11

What? No they’re not

It depends what you mean by “noob” If it’s the kind of noob who doesn’t know their counter or that researches archer defenses first then TK are OP there.