The Egyptian granaries in campaign is not working 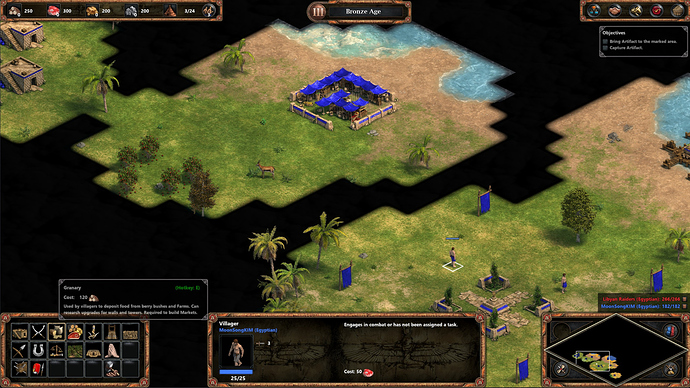 캡처.PNG1991×1121 1.05 MB
First of all, thank you very much for your hard work. I got my childhood memories back. Since I am not good at English, please allow me to use a translator. At first, I inquired through discord, and they recommended this place. Thank you. RadiatingBlade.

The problem is thought to have occurred since the latest update on July 7. The granary just disappeared. It’s gone. I don’t know if you can check the screenshots and see if you can find out.
Let me explain the screenshot a little.

It’s a mission to the Tutorial Civilization of Egypt, right after it started. I’d like to compare the main screen with the mini map, but it’s empty where the granaries are supposed to be. Just in case, please don’t think I manipulated screenshots and games to harass you. If you want, I can take a video and show it to you.
Anyway, there’s no granary there. But when I get the farmer to harvest berries, they bring the crops where the granaries are. On the mini-map. Of course you can’t build a building on the spot. Actually, there’s a granary there. I can’t click on it, so I can’t execute the upgrade that I can do on the granary.
What if I build a new tune? Then after the building site is built, the granaries begin to be built, and when they are finished, they disappear. The granaries. But the granary is still there. It’s just not in my eyes.
I don’t know if you understood me. The same goes for other missions. There’s no granary. I never changed the local file, and I just patched it.
The funny thing is the granary of Greek civilization is operating normally. Where on earth did the granaries of Egyptian civilization go?
Anyway, it’s not a normal situation, and that’s why the game often ends abnormally at the end of the mission.

I think I fixed this myself. I’m sorry, but I don’t know how. I ran a steam integrity test and downloaded 47 files that were missing. Then, the granary came out. I swear, I never deleted any files. Thank you all for caring.

Certain AntiViruses such as Avast! are known for deleting false-positive files. In my case, this happened so I ceased using conflicting software.

Please, set your comment as the “solution” to this topic so people don’t get confused.

Thanks for your help. I don’t know why I don’t have a vaccine other than Windows Defender. Maybe it’s my hard disk problem. I’ve checked the solution right. I’m sorry for the confusion. It’s my first time doing a forum.