The Forum in a Nutshell 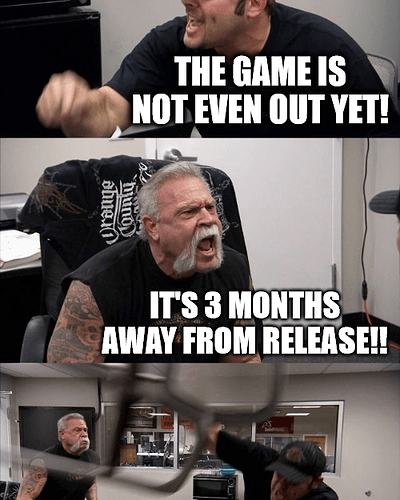 True. This entire forum and all the comments on steam or youtube are just a repeat of the pre Dawn of War 3 release, and I think -fear- AoE4 is going to end up the same: Devs/studio will end up pulling the plug before even the first new content release.

tbh it will be a quite a challenge to reach dow3’s fate. That game set a new low standard in the industry. They’ll find a way to avoid it. But yes, the deja vu is real.

The meme is so biased it’s not even funny

There’s no bias, you have fanboys vs people who will rage if they see a glitch in pre pre-alpha.

I don’t see how it’s biased when it is telling the opinions of both the complainers and the non complainers.

We dont see more videos. So what we see is what we get

how is it fanboy to say the game isnt even in Beta, or that the release is still away?

Things can always get changed, at least real issues surely will be, such as arrows were.

I don’t see how it’s biased when it is telling the opinions of both the complainers and the non complainers.

Except he portrays the second opinion in a way that is biased. Doesn’t even show their true argument.

We havent seen anything worth complaining about rather than graphic, it’s even a more worrying sign

But also we dont see any 1 vs 1 videos about game. This is so worring sign for me.

tbh it will be a quite a challenge to reach dow3’s fate. That game set a new low standard in the industry. They’ll find a way to avoid it. But yes, the deja vu is real.

Especially that they will bring something soon

All we can do is to provide with constructive feedback to the developers and hope that they do something about that, as they have done with changing the arrows. Remember we can only judge upon what we have seen and thus we don’t know the whole picture as of yet.

I’ll never understand those who say things like because of X game the company can never ever again make another great game. Like really? Comments like this make me facepalm a lot but what can you really expect from the internet these days filled with trolls, cancel culture elites, and such who jump on the hate train as soon as they are able to do that.

Voice your concerns and then decide if you want to buy it or not closer to release, hopefully by then we have more videos & such to make our decisions easier to buy or to not buy.

That being said for a game that is close to being released they are indeed quiet and that doesn’t help the situation at all, so some of the faults lie with Relic for keeping us in the dark (mainly).

Yes, the whole game is mysterious and is kept in the shadows.

That’s indeed strange that they won’t show us at least one 1v1 match or something like that because much of our questions would probably be answered that way.

I really don’t know when they’ll figure it out.

Dawn of War 3. The biggest clusterf*ck in PC gaming since ‘Pacific Strike’.

Also, may I say it has been such a grand pleasure to get endless emails about this “insider” program that I get to see constantly, but never actually become an insider. Next you should go to Somalia and eat food in front of the starving people.

I find this process very annoying. I would think most agree.

indeed, they pushed it so much just to disappoint for 3 months now

I agree. I am part of every windows insider program there is. Insider for microsoft means you use that version and give feedback. It doesn’t mean you get to look at a forum to get thrown kibbles and bits. i am quite disappointed. apparently there are some chosen people that are learning this game and we all sit for months and get a 1 minute movie that doesn’t look anything new from the first. we should be totally prepared by release date.