The Hindustanis Nerf is perfect

Many Frank players may scream at me for such a suggestion. Maybe nerf the berry bonus to 5% gather rate

Just remove it and give it to another civ. Be done with it. Franks can learn to play another civ if they’re so beaten up.

It’s about time they got rid of the auto assist

The free food, wood and gold from tech, and the wood saved on not having to reseed is in itself a powerspike. Nevermind the stronger scrush powerspike as well.

Yes this must be the case

What should happen is that Britons should be given Bloodlines due to a recent nerf given to them and also because there’s currently no civ with a Western European building set that has Bloodlines. Now most certainly, they sure still will NOT get Paladin because giving them Paladin would make them too strong which is why giving them Bloodlines is more innocuous than giving them Paladin and if they have Bloodlines, there would also be no need to give them Hussar.

The Britons will be largely unaffected. Since their Longbows are better than their Crossbows.

The Britons will be largely unaffected. Since their Longbows are better than their Crossbows

Dude! I don’t want Britons to have Battle Elephants because it makes absolutely no sense historically since the English never used military elephants and giving them Battle Elephants isn’t the equivalent to giving them Bloodlines because even with Bloodlines, they still be at least sort of weak (if they aren’t given Hussars, Paladins, and Battle Elephants that is to say). Besides, we could always remove the Heavy Cavalry Archer from Britons.

Well, yeah. The crossbow rush will be harder to do. But I mostly care only about the late game.

Really? They have elephant and castle 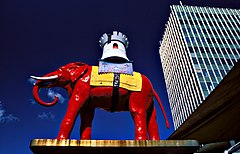 The Elephant and Castle is an area around a major road junction in London, England, in the London Borough of Southwark. The name also informally refers to much of Walworth and Newington, due to the proximity of the London Underground station of the same name. The name is derived from a local coaching inn. In the first half of the 20th century, because of its vitality, the area was known as "the Piccadilly of South London". In more recent years, it has been viewed[by whom? – Discuss] as a part ...

Wait, really? I didn’t know that.

How can it be perfect when the civ has one of the highest pick rates(as pkt) in team games and not a single nerf there despite it is by far the most played gamed mode while they have been so dominant since they were indians and their camels got massively buffed in terms of raw power in previous patch.

Losing halbs in 1x1 is bad for mirror match ups but for others it is going to have a minimal impact, probably zero as their camels attack faster with a massive economy behind, artillery, hussars, CA and ghulam that will melt archs/skirms anytime, you guys need to analyze things further, the nerf wasn’t enough and it isn’t even affecting team games.

The game is set during the mediaeval period. Using elephants in Northern Europe in war is virtually impossible because they would end up dying in the cold during winter.

Not only that, but Europe at virtually no contact with sub-saharan Africa/or India. So getting a supply of elephants was really difficult.

yeah el dorado does not even make sense. why on a meso unique tech there is a spanish name that talks about gold and wealth and the effect is that it makes a unit hella chonky…like what?

jokes aside, el dorado would still be super strong with just +30 HP instead of 40, and would be the same -10HP nerf the OP ghulam received in the PUP.

Sigh I can’t believe people pass up on civ design this hard, but El Dorado is mostly there to give Mayans a pop efficient army in the late game.

Eagles, while great, also scale fairly terribly, and since Meso doesn’t get cavalry, the devs thought they would compensate them with something that would allow Meso to stand a chance vs civs like Paladin/Heavy CA civs like Teutons or Saracens.

Mayans already have no Siege Engineers (so their Trebs are trash and they only get Siege Ram as only other option, no Bombard Cannons either understandably which believe it or not is a big disadvantage in treb wars/late game), they get no Champion (so they struggle to counter Barracks play and/or infantry UUs such as Obuch or Huskarl), their UU while good, again, is not very pop efficient as the elite form does 5 damage per arrow… meanwhile heavy CA sits at 7 and that’s a massive deal when you fight the more armored targets.

Mayans get a bad Monastery tech tree, too, and believe it or not but you can’t just play Arbalest the full game, in high level games you get destroyed by Skirms and especially by Onagers/cavalry play (Onager as an option already counters basically the whole Mayans army composition late game). El Dorado Eagles are there to give their Arbalest a bit more longevity, by acting like an elite meatshield of sorts, as well as give you the option of winning the game in other ways (e.g. raiding).

Mayans are mostly strong in Feudal/Castle age, if you made a game mode where every player starts in mid-Castle Age, probably Mayans would be one of the worst civs. So I see no reason to nerf El Dorado, rather nerf where they are problematic (too cheap Archers and too many resources early game).

At the same time, like stated many times before, Mayans can basically play like 4 units, Eagle Warriors, Plumes/Arbalest, Siege Rams and Halberdiers. Every other option they have at their disposal is lackluster.

Franks are not OP, they get worse and worse if you haven’t managed to gain a lead in Feudal/early Castle age.

what. you’re kidding right? They get worse after like 50 mins or 1 hr depending on the amount of gold in the map. And its almost impossible to not get a lead in Feudal/Castle age. Even if you sit at your base and do nothing, you get free horse collar, heavy plow (which also improves farming rate), free extra hp on knights, extra resources because of faster berries. All these combined is like 700-800 extra resources by 20th minute even if you haven’t taken any fights. In a more practical scenario you can hit feudal very fast and as soon as you hit feudal age your scouts are stronger and that makes it much harder to defend for the opponent. By the time they make spears, wall defend and a get a bunch of archers with fletching and move outside, you can easily do a few skirms with fletching or do archers yourself or just wall and hit castle age and have knights.
Even if you somehow take a bad fight, lose army and need to defend, you just put a bunch of vills on stone and by the time opponent starts pushing with 3 mangonels, you’re good to build a castle. If opponent walls closely with some monks for defense then you can just surround their base with the cheap castles.

That’s because of how strong their bonuses are. Its easy because their cavalry is strong and they have multiple food eco related bonuses right from the dark age. You remove one, they’ll still be quite good, remove two and then they’ll no longer be “very easy to play”

Their tech tree is decidedly average, as a Cavalry civ with no Camel and a subpar version of Light Cav I dare say even lackluster at times.

Its a cavalry civ which can destroy camels with its knight play and cheap castle drops. Has full upgrades on infantry, has hand canoneers, bombard canons, onagers with siege engineers.

Their Archery Range is basically unplayable

Its perfectly fine for castle age. Obviously you can’t make them in imp and that’s probably the only weakness and it comes very late.

Their non-Bombard Cannon Siege is also decidedly mediocre, no SO, no SR, iirc they lack even Heavy Scorpion? Adding SR, for example could be a nice little improvement to accompany any early game nerfs without breaking the civ too much.

The fact that you don’t even know that a 23 yr old civ has heavy scorps shows how dominant they are that players don’t even have to look if its available.

Chakram thrower is the only fair comparison here and yes axemen are bad compared to it. But they just function as an anti-pike unit in late castle age and early imp and they do that job neatly, hence the low cost. Obuchs are strong because Poles lack plate barding armor, don’t get Paladin and don’t have halberdiers either.

But really the 1 glaring weakness Franks have is that the moment your Paladin powerplay doesn’t work, you are stuck with CASTLE AGE Skirms in Imperial that die to

Most archer civs have a rly easy time defeating Franks provided they can prevent or reduce the impact of the early Imp Cavalier/Paladin power play.

By most archer civs if you mean Mayans, Ethiopians then yes probably. Britons is a fair and even matchup for Franks. Rest all archer civs DONOT have an easy time defeating Franks and stats from several years of ranked ladder, tournaments shows that.

Ever since Khmer farms got further nerfed by 3%, Indians lost the extra p.armor on Imperial camels and Lithuanians lost blast furnace, Franks were unmatched as a pocket in TG.