[Mod note: The account that created this topic has been banned, but we will keep the topic open since you all are discussing it.]

Jans arent only handgunners but also they have used swords. Some of the land marks are not historical and units too.I wonder what devs think making bad decisions.

This is why the Horse Archer should NOT be a unique unit anymore. It should instead become a common/regional unit.

Also, what I do want to add is that as what other stuff we can agree on, the Janissary does need to be more powerful than the Hand Cannoneer just like in AoE2 and the Great Bombard will definitely need to be more powerful than the regular Bombard as that unique bombard should NOT end up like the French unique bombard, which happens to be weaker than the regular Bombard. Those problems you mentioned all definitely need to be fixed to be more accurate before the release of this DLC that will add the Ottomans.

I would agree that the Great Bombard should get higher DPS than the bombard. However, the Janissary costs 60 food 100 gold while the handcannon costs 120 gold 120 food. This makes it a good unit. Given the size of the Janissary Corps, it would make since to make the unit more of a strength in numbers type of unit as the devs have done.

We suspected they would make Ottomans weak on purpose

Before you go on about devs hating Ottomans, the English have only one unique unit, the longbowman. That’s it. Ottomans have four. The Janissary, Sipahi, Great Bombard and Mehter. Also, they have the Viziers and Imperial Council. Ottoman implementation in AOE 4 is already way better than many of the existing civs. Also, given the ranked 1 V 1 win rates, the devs are trying very hard to keep things competitive: 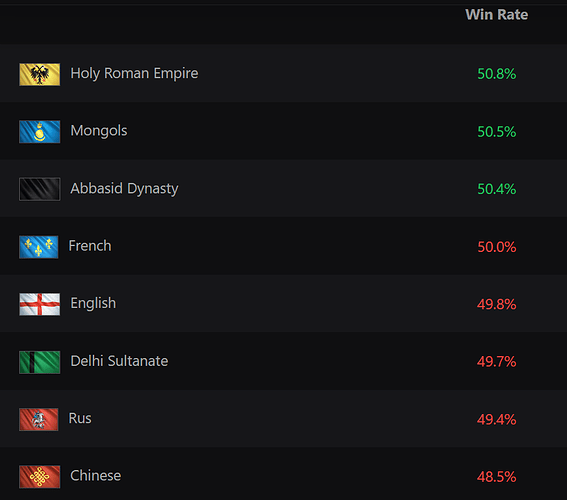 Yea man %100 agreed on this…Turks should have Mangudai like unit .Maybe Sipahi’s should be able to switch between melee and ranged mode . Problem solved xD

I agreed on this one too. But the thing is Great Bombards are able to kill massed units so perfectly. So maybe %20 more dps would be ok .

I dont agree with this one. Because Jannies aren’t hand cannoners they are musketeers so its normal for them to have less attack. Also Jannies are more cheaper then HC’s other thing is jannies are better against Cavarly but they shouldn’t be weak against ranged units like that.

We suspected they would make Ottomans weak on purpose, but What. The. Hell. Is. Going. On. Here??? What are you trying to do???

You also should note that by military school this unit are %100 free to produce thats real deal man !

Oh and i vaguely remember jans have BONUS vs calvary?!!! Which makes sense why archer SHOULD kill them? Therefore they are NOT standard handcannors but aoe4 FIRST musket class type (a copy from aoe3) more KEKW.

Who is up voting this stuff??

Jans are NOT HANDCANNONEERS??? READ THE TOOLTIP? They are a NEW unit type therefore having a unique function!!!‽‽

Use me as a downvote button

The Janissary is an amazing unit!

I linked an image of the Handcannon and Elite Janissary stats below. When you factor in attack speed, the handcannon has 16.5 damage per second verses the Janissary at 11.5 damage per second. Keep in mind the Handcannon cost 120 gold and 120 food whereas the Janissary cost 60 food and 100 gold. So it’s 67% the price (50% gold cost which is what matters late game) with 70% the base damage. Giving it better bang for it’s buck as far as DPS. On the other hand, Handcannon has greater range and health. Blah blah blah. None of this matters with the 20 bonus damage the Janissary gets against cavalry. Giving it 24.5 (48% better than the Handcannon) damage per second against cavalry. It’s one of the few units in the game with a ranged anti cavalry attack. Also, you get it in Castle Age. Not even the civ that invented gunpowder can say that.

Bro you dont understand the histori is not the same turkish and Ottomans. Turkic peoples were of largely East Asian origin but became increasingly diverse, with later medieval Turkic groups exhibiting both East Asian and occasionally also West Eurasian physical appearances and genetic Even Mongols where part of this
ethnic group. They should have horse archer yes, but as well as jenisaries should not be in castel and should not have anti cav bonus. GB is ok i forget u can garrison infratry to speed them up as well as mehter total of 35% speed atack if i’m not wrong. I’m mean Dev should balance more historically accurate and manteining bonus as the others civs.

The Great Bombard has splash dmg and 11 range. It has pros and cons and if you have a lot of them, they form a deathball. Making this unit any stronger would be difficult to balance. I think the Great Bombard is fine.

Janissaries are a different unit than Handcannoneers. They are much cheaper, have a significant bonus to cav, shoot faster and are hard countered by ranged. I think they are not too weak in comparison. For lategame they are supposed to be played with the GB, because that’s where the synergies lie. Janissaries can repair the GB, while the GB takes care of archer blobs like nothing else. Any horseman or knight that wants to kill the bombard will be ruined by them. And with Sipahis into archers and a mixed frontline out of spear, knights and MAA, Janissaries really start to shine.

Janissaries are not Streltsies. You don’t go ahead and mass them like crazy. You mix them in until you can compliment them with the GB.

But I agree that it is weird and disturbing that the Ottomans do not have a horse archer. But HRE or English also lack so much stuff they should actually have as well, I think we just have to deal with it. HRE for example lacks so many signature units like a Ritterbruder as reference to the Teutonic Order, the Black Rider, different kinds of Landsknechte (Arquebus, Lance/Halberd), Archbishop, various kinds of mercenaries and so on. It was also quite common for Europeans to use a bow from horseback. They were not as skilled as Mongols for example, but still able to fight like that. The horse archer could actually be a baseline unit for most civs, while special horse archer civs get several boni to show their aptitude. Like Rus for example.

I just realized that the Great Bombard is sort of stronger than the regular Bombard considering I saw the stats of the Great Bombard and tried to compare it with the regular Bombard stats. Now as what we can agree on, it is indeed weird and disturbing that the Ottomans don’t have the Horse Archer even though they historically did have them and the fact that horse archers were used by other civilizations is why the Horse Archer needs to become a common/regional unit instead of being a unique unit.

HRE for example lacks so many signature units like a Ritterbruder as reference to the Teutonic Order, the Black Rider, different kinds of Landsknechte (Arquebus, Lance/Halberd), Archbishop, various kinds of mercenaries and so on.

This dude knows what’s up.

The fact that I got to find out more about how the Ottomans are via livestream and videos on YouTube is why I took back some of the statements from my above comments about certain things. Meanwhile, at least a lot of people would definitely agree that the Horse Archer needs to be given to the Ottomans.

Janissaries are a different unit than Handcannoneers. They are much cheaper, have a significant bonus to cav, shoot faster and are hard countered by ranged. I think they are not too weak in comparison. For lategame they are supposed to be played with the GB, because that’s where the synergies lie. Janissaries can repair the GB, while the GB takes care of archer blobs like nothing else. Any horseman or knight that wants to kill the bombard will be ruined by them. And with Sipahis into archers and a mixed frontline out of spear, knights and MAA, Janissaries really start to shine.

Jannis have allready weak stats…Giving them +%50 negative ranged dmg taken is basically destroying this unit…Its not only archers…Its basicly everything in this game like mangonels cannons springards tower shoots keep shoots hand cannon shots ( deals 73 dmg to jannies ) list goes on… Also MMA’s and eve spearmen can erase jannis too…We are TALKIN ABOUT 100g 60f unit…Jannis is trash repairmens they should cost like 50g 40f or something.

The Janissary is an amazing unit!

this can only be a bad joke 11
+%50 ranged dmg taken makes this unit crap…Only this factor alone makes this unit hell out of crap…Not to mention their having very short range etc…
Even MMA’s are destroying them .
Im sure u wont pick ottos and u wont be creating jannis at all

But its ok at least Malis are great…With especially poison arrows they are sold as rock.
Maybe ottos for fun civ . But to be honest Elite Jannis skin are coolest design ever i saw in game.