The Ottomans need to be given the Horse Archer!

Like I said devs accept that ottomans as Turks as giving Seljuks landmarks to the Ottomans, devs should give horse archers to the Ottomans. If they dont give, this is so unhistorically ironic. 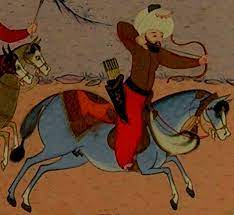 There are many things in this game that are not historically correct, so I don’t bother about real 100% accurate history in this game. Just to be fun!
I fair about introducing units, but I think horse archers are simply bad. Introducing them for ottomans don’t change anything. No one will use them.
I will change sipahi fortitude ability with one that transform them in horse archers, it will be interesting

Now I do get that the game isn’t 100% historically accurate, which I wasn’t calling for but I just believe that a unit with a generic name like “Horse Archer” sounds like something that would be a shared unit rather than a unique unit. Now, giving the Sipahi the ability to use a ranged attack sounds like a good idea and it can most certainly be the good alternative to giving Ottomans, the Horse Archer and honestly, I’m most certainly going to like it considering that as you said, it would be interesting.

mangudai has been in need of a buff since release, so you can’t really compare

Other Civs also have missing historical units, AoE4 just using some of them because of balance reasons and game design choice. Some games like total war have much larger unit roster.

Most civs has less than 3 unique land military unit. Ottomans has 4 already, 1 less than Chinese with all Dynasties (Mali has also 5).

And about adding toggle ranged ability to horseman: what is gonna counter it? Even if it’s duration based, it ll be OP.

And I’m pretty sure every civ have some kind of ranged cav in history. They weren’t relying on as much as asian based civs though.

Talking about balance, perhaps once the Horse Archer becomes a shared unit, the cost of it can be changed to be food and gold instead of food and wood as a maybe helpful balance solution.

If any civ can make horse archers, there is still a reason to make normal archers instead of horse archers? The mobility factor is a game changer and there is a high risk that archers became useless

They are the same devs

. Forgotten Empires works on both.

Horse archers cost more, have more counters, have shorter range without a unique tech, have no bonus damage against spearman, and they deal only marginally more dps.
They have their disadvantages.

I think the Ottomans should be given a horse archer (different design/stats than the Rus one to make it fun). But only when the Delhi get a horse archer, the Abbasids get something besides camels, the HRE get different types of Landsknechts (pikes, guns, mounted), and the Japanese, Norse and Byzantines get a civ. The Ottomans already have 4 unique units and a unique building. That’s more than any civ other than the Chinese and Malians. There are 7 civs that need more attention than the Ottomans in that they have fewer unique units/buildings. If any civ needs another unique unit it’s the English as they only have Longbowmen.

I also think the horse archer should not be a shared unit. They should vary by civ like we see with the mangudai. Either that or the Rus need another unique unit.

Vinifrss need to be reminded that no-one cares or wants them around? Bring in AoE Forum mods!

If that’s the case, why not leave? It’s obvious no-one except your alts is on your side. Also, go get some therapy, you seriously need it.

You got that right. He keeps creating alt accounts and we sure can’t have that constantly happening. People should be able to debate on something or do criticism of something without anyone creating trouble.

Mehter with CA will be worse than Mangudai for a cheap cost.
Faster than anything with ability to reduce dmg from outposts and tcs or just with faster firing rate.
There’s a reason Ottomans have no CA in their roster.

I get CA would fit them but Mehter makes their CA better than Mangudai which are very unique unit.

Devs went for Mehter identity and I can’t blame them since it’s fun and great.

Also Ottoman roster doesn’t need CA since they’re pushed more towards siege and Jannissaries in castle rather than mobile composition like Mongols or Rus have.