The patch is going to kill China

Patch notes absolutely destroyed China. Most importantly, the removal of clocktower supervision means that China can rely on their siege anymore. And while I agree that China siege was broken, the civ has nothing else going for it. According to aoe4world, China’s 1v1 winrate was middle of the pack (fourth to sixth highest winrate) across all elo ranges. And in team games, China actually has the lowest or second lowest winrate, contrary to popular conception.

So what happens when you absolutely nerf the core mechanics of a mid-tier civ, yet provide no compensatory buffs? The civ becomes bottom tier trash. Chinese is going to be worse than Abbasid was now. And this is especially vexing compared to the fact that Mongols again basically didn’t get nerfed.

Ranged anti-siege hardly didn’t get any buff. If you have ground troops, you shouldn’t worry too much. Chinese bombards will still shoot far, hard, and fast. It’s not like the Chinese absolutely needed clockwork to dominate the late siege scene.

Patch notes absolutely destroyed China. Most importantly, the removal of clocktower supervision means that China can rely on their siege anymore.

Now feel the pain every other civ has to for siege. Build expensive siege workshop and try to spam bombards. It went exactly like predicted except for range. I think range now wont be issue with cav damage increased.

China’s 1v1 winrate was middle of the pack (fourth to sixth highest winrate) across all elo ranges. And in team games, China actually has the lowest or second lowest winrate, contrary to popular conception.

Check elo in top. Because china is hard civ and new players cannot plaly that well. Age 4 china used to be impossible to play against. So now the closed map will be more interesting.

yet provide no compensatory buffs? The civ becomes bottom tier trash. Chinese is going to be worse than Abbasid was now.

Personally I am pretty happy they are fixing broken mechs. Team games will be much more balanced now.

Check elo in top. Because china is hard civ and new players cannot plaly that well. Age 4 china used to be impossible to play against. So now the closed map will be more interesting.

Sure. According to aoe4world.net China has a 45.6% winrate in >1600 elo. This is the fifth highest winrate. A balanced winrate. Not balanced anymore with the nerfs.

Don’t get me wrong, I agree that China clocktower siege was OP ■■■■■■■■. But the rest of the civ is so weak that if you take that away from them, they become bottom tier. I was an advocate for a clocktower siege nerf with some compensatory buff (personally I wanted a dynasty landmark discount) 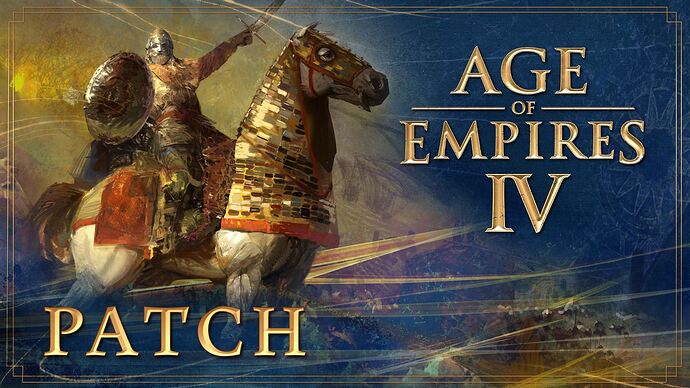 Patch 11009 is releasing later this week, and so we wanted to provide a preview of what's to come for Age of Empires IV.

They? sorta did? What else does China have going for it in the lategame besides the clocktower? Don’t say Ming Dynasty/Grenadiers; I haven’t seen one high level game where a Chinese player reached Ming Dynasty.

For example, how is China ever supposed to beat HRE now? It was already the worst matchup for China; HRE has a 55%-60% winrate vs China right now. With no clocktower supervision and a weaker bombard, China will lose the siege war vs HRE Regnitz-powered culverins. And it;'s not like Chinese infantry or cav is any stronger than what HRE has; HRE maa absolutly destroy Chinese palace guard

may be because siege were super OP?

PS I’ve seen against Hera in mirror China vs China.

China needs to become a cheap infantry civ.
It would make it historically accurate too.

For example, how is China ever supposed to beat HRE now?

Supervised Feudal push vs HRE is a killer. Zhugenu tears through everything HRE can throw at you in feudal. Add in a few spears or horses to tank, you can slow down HRE Castle timing significantly.

Chinese players need to learn how to come out of their shells and be aggressive against civs that are better at late games.

When Chinese wishes to go for aggression, they have incredible capacity through supervision. Song Dynasty gives you an incredible ability to be aggressive with a high-value ranged unit while pumping out vils.

These changes were much needed. They still have better late game siege than other civs, hand canoneers with extra range, their bombards still have 12 range, etc.
Also how are we going to know what china has or hasn’t going for them when all they need to do is spam siege with spears or Palace guards to deffend i?

If a Chinese Zhuge Nu push were good vs HRE, we would see the pros doing it, and it would be reflected in the >1600 elo winrates. But no in >1600 elo China is trash vs HRE.

Feudal aggression is possible but if you wait for Zhuge nu most HRE players will already be on their way to castle age. You would have to start very early by pushing them away from gold. It’s possible but pretty tricky

I do stone tower rush (+ knights) with french and it catches a lot of players off guard. They get confused how to defend. Especially is 2v2s when its not easy to scout both opponents and maps are not large enough.

Nothing is civ specific. You should try different plays.

I agree that the changes were much needed. But is China lategame truly better than other civs now? HRE, Abbassid have culverins. Rus and Mongol have greater range springalds. And the clocktower health bonus no longer makes a big impact because you can’t supervise it anymore

Also, the fact that you don’t see pros do it doesn’t mean that it’s ineffective. That’s a jump in reason. For example, HRE feudal all-in is really really strong. Pros don’t do it. Is it somehow ineffective?

What needs to be done next then is to tone down how well the hre scale in the late game.
I get they are rather weak early, but ok closed maps they are going to be top tier right now by far.
Regnitz giving 900g/m+being able to quickly age up to imperial and with a cheaper landmark which produces faster and cheaper vills makes the civ scale way to well in late game.
I think devs should either nerf the gold income to 200g/min or improve the gold income that other civs can get from relics.

Okay, sure, the winrate’s 45.3% right now. Margin of error might mean that it’s closer to 50%, or closer to 40%. But sure, let’s say it’s relatively balanced right now. So what happens after these nerfs? China’s vs HRE winrate is going to plummet, possibly to sub 40%

Perhaps I’ll be proven wrong about China. I will be very happy if their winrate remains at what it is right now, and/or if people innovate out a new meta. But the evidence that such a thing will happen isn’t there right now; rather the evidence indicates that China will truly be trash tier.

I think this patch looks great. China will do slightly worse late game and taken down several notches in team games but that’s not a huge deal, that’s what everyone asked for. We’ll see how things go in game. It doesn’t matter what the win rate charts say, it only matters how much fun gameplay is for everyone