Theia's Lance of Stone not applying to Contarius after researching

I’ve been playing Oranos online for a bit, and recently I noticed that researching Theia’s Lance of Stone no longer applies the tech to Contarius (the buff is missing in the unit information page, and the increase in damage isn’t applied).

To replicate this, I tested in an offline game against a CPU. I’ve attached two pictures.

This screenshot shows the Contarius with the Heavy upgrade (+2 damage).

It also shows Lance of Stone researched, but the upgrade not showing in the unit’s information panel, as well as the damage bonus not being applied to the Contarius Hack Damage. 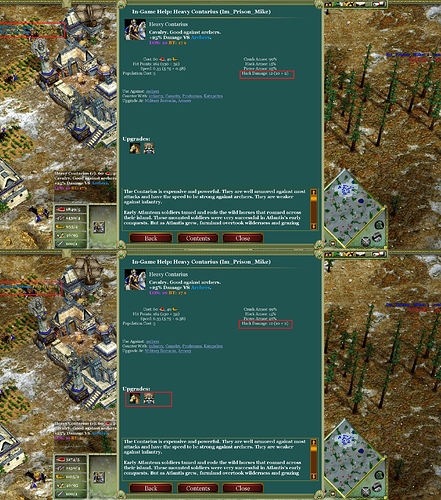 As far as I know, Lance of Stone only applies a hidden anti-building damage bonus, and not general + damage.

Lance of Stone also includes a +15% to Hack Damage (https://ageofempires.fandom.com/wiki/Lance_of_Stone) similarly to Poseidon’s Secret, which bumps up Hack Damage by 1.

Just reading through that wiki page, I realize this tech only applies to Contarius Heroes. Not sure when that change was made, or if that’s always been the case (pre-EE). But tested it, and it’s working as expected.

According to this it only ever applied to the Hero version https://ageofempires.fandom.com/wiki/Lance_of_Stone