yes, memory leak is an unlimited thing… the only workaround is to save very frequently.
But this is just lol, i can play GTA V on high settings, Elite Dangerous nearly at highest, and none of these eat as much ram as this memory leaker, with graphics… that is funny these days.

that is funny these days.

The engine is the engine from 1999 which is optimized to run 2019 graphics.
So that will cause issues.
But seems you never saw how much it is improved now since the release…

The engine is the engine from 1999 which is optimized to run 2019 graphics.
So that will cause issues.

Read these sentences again, they are contradicting. The reality is that AoE2 DE is incredibly poorly optimized if at all. But to be fair, yes a few things have been improved upon. But only a few.

Engine is from the original version? I don’t think so. That’s easier to re-write than update the old, which is very outdated.

Engine is from the original version? I don’t think so.

This was confirmed.
That’s why you can use AOC saves and mods in this game.

That’s easier to re-write than update the old, which is very outdated.

Well, they wanted to give a nostalgic feeling. Otherwise, a 3D engine would do you better than an engine form 20 years ago. AOE2DE and AOEDE engines are updated Genie Engine.

mods, and saves does not mean anything. See for example OpenRails, in which you can use any content from microsoft train simulator, while it’s a completely new game, writter from zero.

mods, and saves does not mean anything.

But Cysion confirming it does mean something. 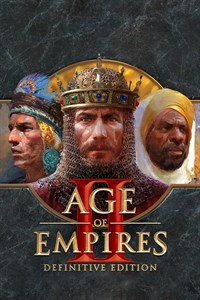 Age of Empires II: Definitive Edition is a real-time strategy video game developed by Forgotten Empires and published by Xbox Game Studios. It is a remaster of the original game Age of Empires II: The Age of Kings, celebrating the 20th anniversary of the original. It features significantly improved visuals, supports 4K resolution, and it also includes "The Last Khans", an expansion that adds four new civilizations based on Central Asia and Eastern Europe, and four new campaigns. It also includ

The game is called a remaster