I’ve been a game lover since the 2000s, it’s not fair to me and my friends, who have a similar rating to have to play with high level players.
This is an outrage, it totally spoils the game and the worst is spending hours looking for the game for this, 50 minutes wasted of my life.
This needs to be fixed, in the past they didn’t earn a single point.
I didn’t want to have to stop playing but I need to get the attention of the ADMs. 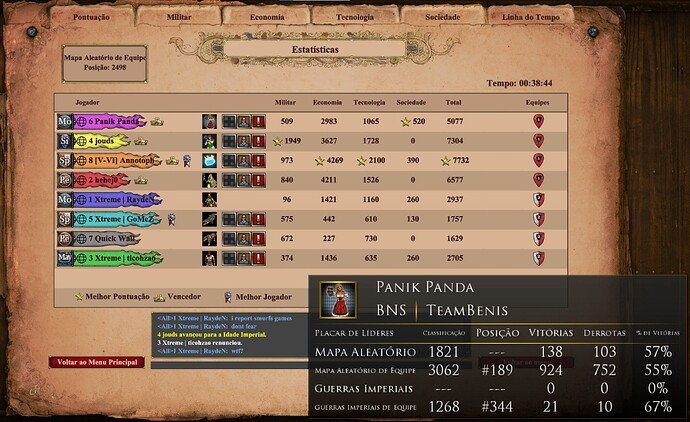 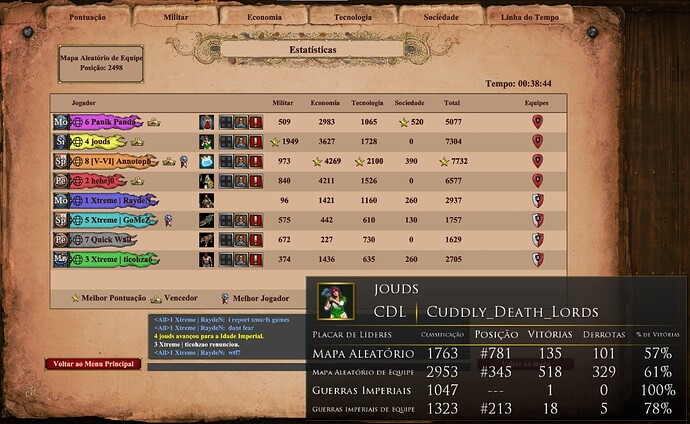 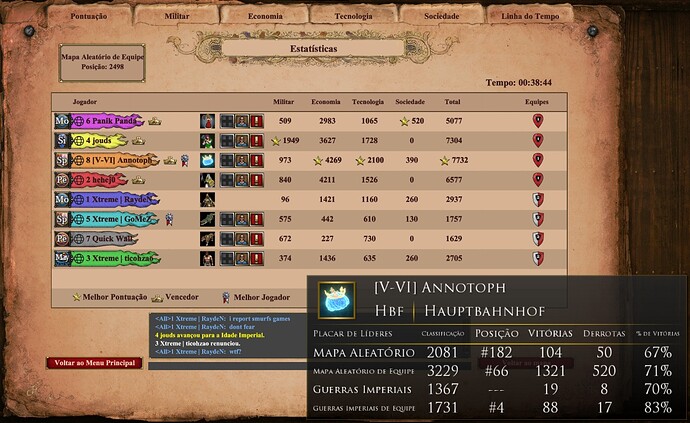 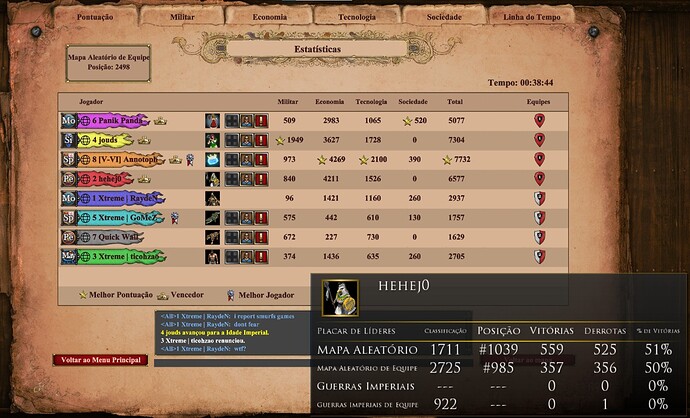 A little more context would be appreciated.

Ok sir, for a good understanding half a word is enough, but I will draw it for you.
Look the ratings, i want to waste my time, that’s not fair. 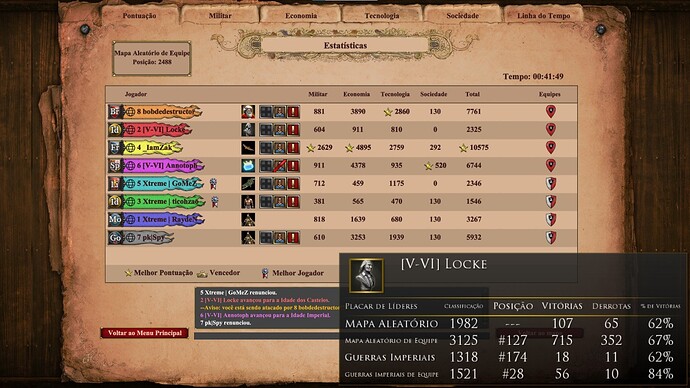 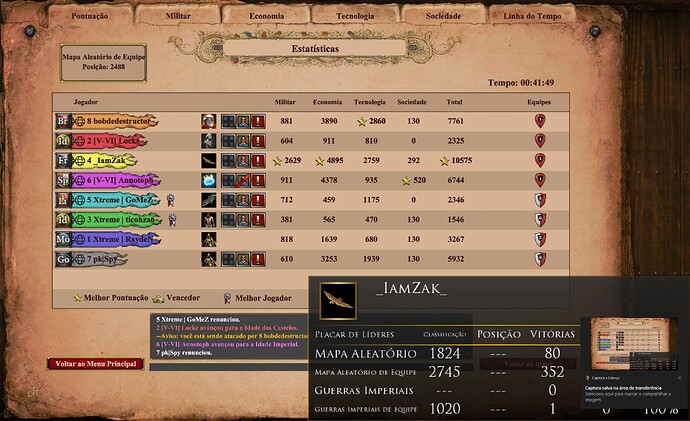 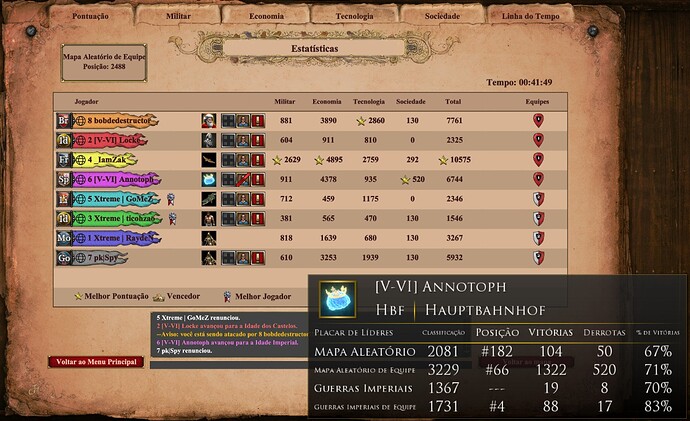 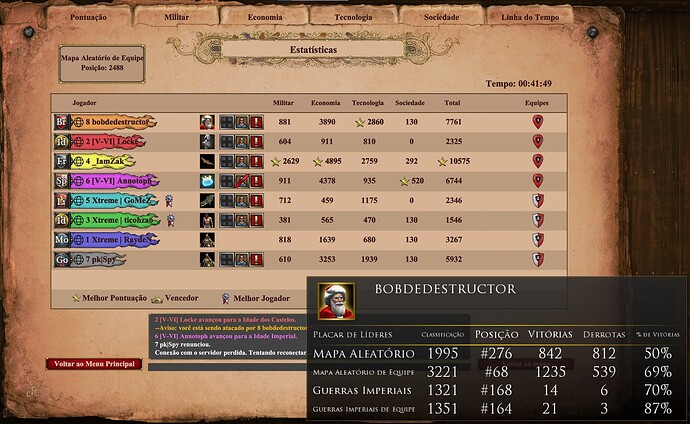 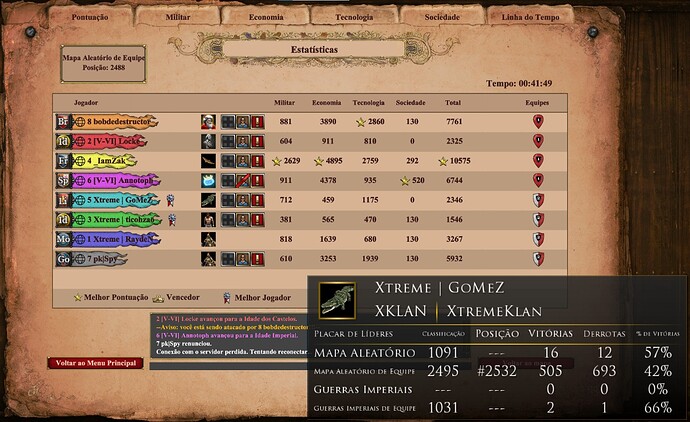 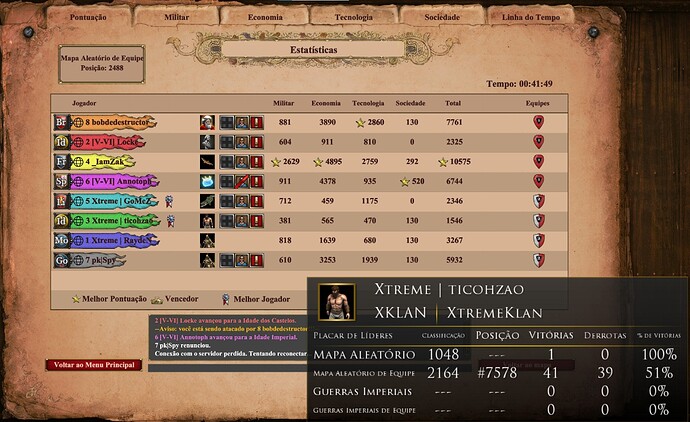 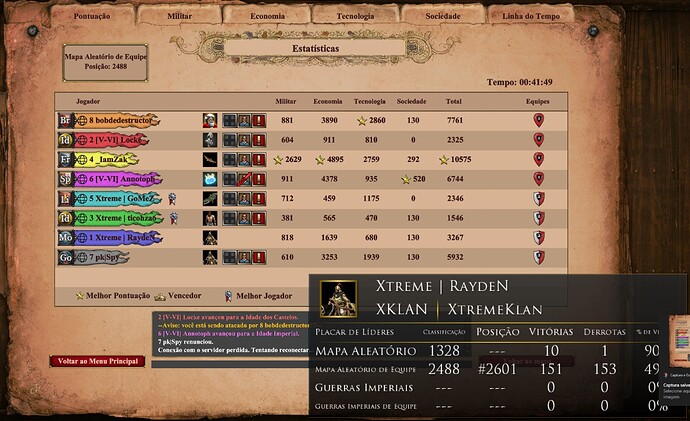 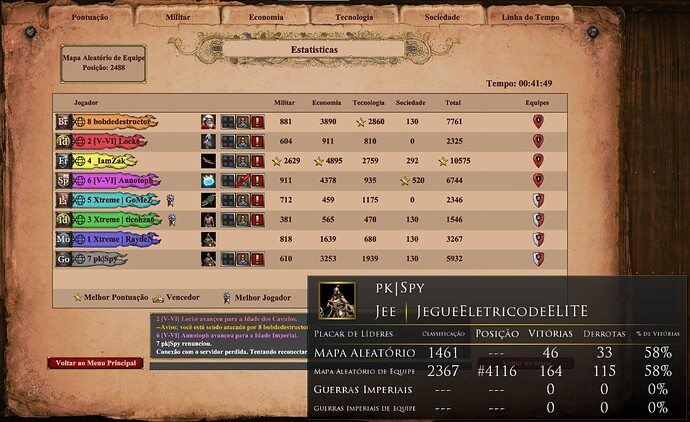 There are not many teams with such high ratings, which means it takes longer for you to find matches and the matches are less fair.

the matchmaking is a disaster

this is what happens when a system is left to rot for multiple years. all the players disappear and these are the only remaining pairings

it’s more of an issue of not as many players at that team-game elo.
basically the team has two possible likely opponents, the 3rd being the most unlikely which is similar elo, either opponents a good amount lower than you or more likely, those higher elo than you since the possibility of them going against higher elo is far lower and the only players in matchmaking near their elo happen to be this team, or another such team.

the population of aeo 2 DE is a good amount of players, more is always better, but in terms of getting quality, skilled players of the higher elo, that number may remain small regardless of new traffic.

the odds of the 3200 elo average team finding a similar elo team is very low, so the matchmaking does its job finding the next best opponents.

This does look like a bad match up. Probably the number of teams on this elo is low, so they were in the queue for a long time and are matched against lower players for that reason. On of the main reason of this happening is the bad TG ratings, with a lot of smurfing and stuff like that. As result the difference between the #1 and #100 on the ranking is already about 1700 points, because people exploit the system. This system should be fixed by implementing a better Elo calculation, like discussed in the following thread:

the solution of starcraft2 with separated MMR for EVERY premade, seems plausible for microsoft, I mean, it is just an INT number in the data base, and is not like microsoft can’t store that data.

What the higher level team did, is basically the same like adding a reverse boosted player/smurf to the team: They know that the matchup is very likely in their favor before queueing up.

If more than two rm1v1 20++ players with voice chat queue up, the matchmaking system will run out of possibilities and give any match.

Only 40% to 50% off all teamgames, queued by player teamgame rank 500 to rank 10000 will be somewhat fair. Someone in the forums made a stat about this.
There are just too many griefers and the top 3% players run out of matchups.

Both a rework of the matchmaking system and ranked custom lobbies are needed, but that is the case since the release of the game.

These guys have done nothing wrong, if i’m not missing sth here. I don’t think they intentionally want to play vs lower players. Otherwise they would use a smurf. 4 People at the same level should definitely allowed to play in a team in ranked.

Smurfing is destroying this game every day

Matchmaking is in all options, ways and ends completely inferior to a ranked lobby system, no matter how you look at it and how much those in favor of it try to twist reality.
Keep it in Quickplay and make
Lobby Browser (Unranked) and Lobby Browser (Ranked).

Luckily the civ pickers can hide their civs so counterpick isn’t a problem as it was the entire reason random was so popular. Civ pick all the way.

Being rid of Mirror in ranked would also be great.

Wait for the altf4 timeouts or bans, then the matches will be much more unfair than ever, MM shouldn’t allow +300 elo differences when pairing players.

Sometimes at the higher elos, at least as far as team games, someone can be 1500 elo higher than you and still only be worth maybe 100 elo above you.

What I mean by that is that when you pass the threshold of constantly playing elo levels you enter a level where you have more odds of being connected to those of lower levels and have far fewer games with those of higher or similar levels due to the lower amount of players available at your elo around the clock, and thus you just keep gaining elo without too much resistance.

I’m really happy with the matchmaking for myself personally. Must have not been enough players your level around.

Or maybe not … would be nice to see the Elo of your own team too.

I also play 2400-2600 Teamgames. My Games are 90% fair. If it took 50 minutes of your time that means that you could keep up with these guys for quite a while. So congrats on doing that well.

In lobbies
I get kicked
I have to check every setting in case I miss something important
Waiting time in my experience is longer
Sometimes the games don’t even start (host afk, not enough people join etc)

I’m not saying everyone has to like matchmaking or dislike lobby, I think lobby is great if you want to something specific, I do enjoy Random Cost Mod and CBA and Forest Nothing for example.

I think it’s a bit much to say

Matchmaking is in all options, ways and ends completely inferior to a ranked lobby system

On a side note in the unranked lobby system after being kicked for having an elo, it bugs me that if you never play a ranked game you’re much more likely to get to play lobby games since you don’t have an elo to look at.

it bugs me that if you never play a ranked game you’re much more likely to get to play lobby games since you don’t have an elo to look at.

Yet one more reason to have a smurf @WinFu1 Sometimes I play with friends and we don’t make enough people to make up a lobby. But with a good elo, you are avoided like the plague

Doesn’t have to be a good elo, if you AN elo people will avoid you. Whether they think it’s too high or too low. If you give people something they can judge, they will judge you.

Better than be thrown in a game where you don’t have the level to play like current MM on tg, it makes teams with 0 possibilities to win.

If you get kicked ina lobby system you just go a host ur room, problem solved, on match making you can’t do anything but stacking and smash low elo players and loners.

Voobly already have showed how terrible lobbies can be. I am glad we now have match making. It still need some improvements (Read: A good rating system that is reiable as example). But going back to a lobby would be a bad idea.