One interesting thing that I noticed by watching the trailer and didn’t see it mentioned somewhere was how the English villagers seem to respond to what’s probably the sound of the Town Bell.

We can see them moving massively and in a row to the insides of the English town so I assume this could be a gameplay reaction of them.

1)They seem to be running in panic instead of just walking casually. Could that mean that raiding vills maybe won’t be that easy from now on?

2)They get past and ignore the building that we assumed is probably the Town Center (the one with the bell in the middle) and keep going forward towards somewhere else. 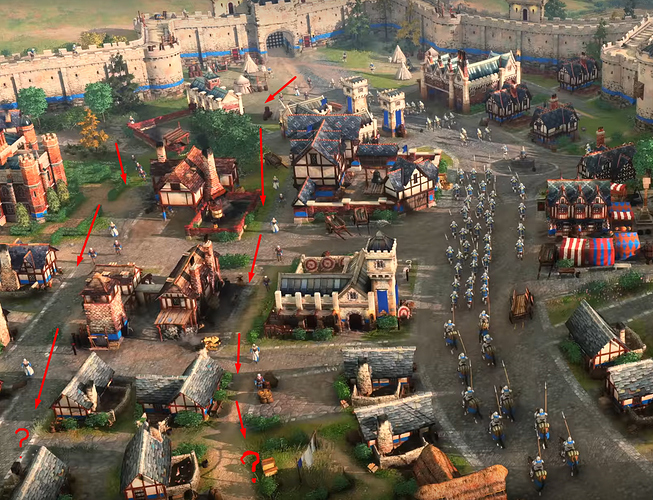 From another view of the English town it is made clear that the only thing towards the direction that the vills are taking is their housing zone.

Could that mean that -at least the English- villagers from now on will be running back and hiding inside their houses instead in the Town Center when the Bell is rang?

That’s what I thought at first as well. But in an interview somewhere Isgreen stated that everything we see in this trailer is actually part of the gameplay. That made me wonder…

maybe but with another camara view

How can you tell the images above are a representation of what is occurring during an actual invasion? I would interpret the trailer as being two scenes, the first, being the imagery you’e provided seems to me as a depiction of what life is like behind the walls.

This scene is shown a little before the actual invasion begins, soldiers going out to defend, vills going in to hide. It doesn’t show what every day life is like behind the walls, that’s actually up to the first 30 secs, if you rewatch the trailer.
Obviously we can’t know if there is a mechanic (like the town bell) that does that with the vills or if it is just point and click. But in all age games, vills used to run and hide in town centers, towers, forts, etc, which is not happening here. It could ofc be made like just for cinematic purposes like the guys mentioned, but, take a look at this as well;

“What we decided on pretty early was that we were only going to show what we knew would deliver and that was kind of our mantra. So everything you’ve seen in here today – and we’ve hidden a whole bunch of little things in here that people will find as soon as they start to go through the trailer frame-by-frame,” Isgreen laughs, explaining that the trailer has been captured from an early pre-Alpha build so we shouldn’t look too closely. “But it’s so important to us that everything you see in this trailer is stuff that you will see once the game lands.”

“And as we go forward and start to show more – and there is a whole bunch of things we have not shown yet, and not just civilizations, but aspects of the game that people don’t have any idea about yet – all of it’s real, none of it is fake,” Isgreen tells me, pulling attention to the army sizes, the battles atop walls, and numerous quality-of-life enhancements. “None of it’s not going to be there. We don’t want people to be like, ‘oh, what happened to that Falcon that was circling around the Mongols; I can’t believe they took that out!’ Nope, it’s all in. Wall combat as well, it’s all in there – it’s all in the game and it’s all working, as of right now at least. As we continue through development and show more of it, it’s our promise that it is all real. That’s one of the reasons that it has taken so long to show anything new, we want to guarantee that we always show real gameplay.”

Speaking of quality of life enhancements, having the vills running towards the nearest keep by themselves when enemies are nearby would be a neat feature imo

The scenery you’ve posted to was depicting life behind the walls, or they would not reveal any footage actually behind said walls whatsoever, so listen, I can tell how you’re a bit of a naive person because the scenes you’ve cited to means they would have begun the entirety of their thriller at about :42 had they not wanted to show what life is like behind those walls.

The scenery you’ve posted to are showing life behind the walls, or it would not have revealed any footage actually behind said walls whatsoever, so listen, you’re a bit of a naive person; and I can tell because the scenes you’ve cited to means they would have begun the entirety of their thriller at about :42 and that’s the bottom line.

Uhm, did you actually read or understood anything of what I wrote, or did you just wanted to call me naive, (which by the way, name-calling is against the forum’s rules), and repeat your part?

Anyway, because I know you didn’t understand and I can guess what probably confused you, let me break it down to you further.

First of all you should rewatch the trailer or you will get confused again. From 0:20 to 0:30 you can indeed see " what life is behind the walls" and has nothing to do with the title of the thread.

I used those images from the earlier seconds of the trailer to show you from a different angle, and with arrows, the route that the panicked villagers are taking at 0:42 (that is the first image, and the gif in the end).
They are called screenshots, I can capture them while the video is running and put arrows on them to visualize what I want to say so that you could understand and contribute to the discussion without having to ask for explanations over and over

How can you tell the images above are a representation of what is occurring during an actual invasion?

The scene at 0:42, comes right after the Mongols are introduced and we don’t just see ’ what life is behind the walls’ but a city at a state of emergency, being attacked. Which is very different from its earlier peaceful state. Soldiers going out to defend and panicked vills going in to hide. This is how I could tell.

What did you mean by, “It doesn’t show what every day life is like behind the walls,” what scene in particular were you referring? All four screen captures above seem to me as being in a state of “life behind the walls.”