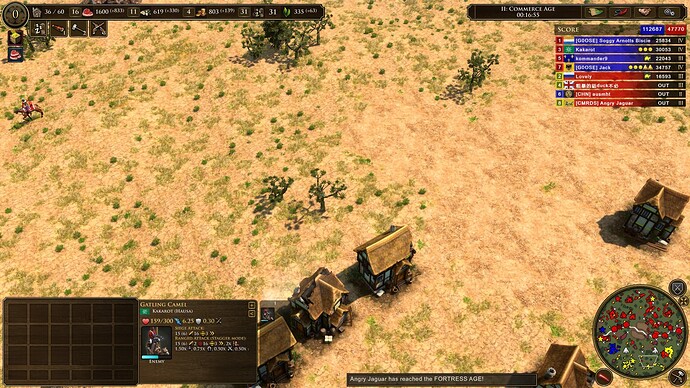 I queued solo TG and matched with some pros in ranked (pretty common in aoe3 TG), we got wiped out quickly and I resigned first, after that one of my noob teammates asked what unit it the gatling camel is, they replied " your death", and laughed at us.

I went on to twitch and watched their stream after I resigned, and then they laughed at me…again, for being new to the game and coming to his stream after losing to them. Btw our team average 950 elo and opponent average 2200 and are top 50 on the ladder…

no wonder there are only 2 viewers on their stream

This screenshot was taken just before our last player resigned, to show who they are (the pros)

top team are the pros

This is not the first toxic game i experienced. these kind of behaviour never happens on aoe2 community, pros are friendly and they welcome low level players., my pro friends play with me frequently and never minded my mistakes etc. There is a reason why aoe3 community cannot grow as large as aoe2. New players seem unwelcomed

The only potentially toxic thing I see here is your teammate refusing to resign a clearly lost game 1v4.

this is a screenshot taken seconds before he resign. We resigned really early. We dont know each other and queued solo TG

This screen shot is not showing the toxic words, it is just to show who those pros are.

Not exactly related to this but:

But there is a divide in AOE3 community between tiny minority of PROS on 1v1 that usually gains all the DEV attention and spotlight , vs huge majority of Team games, and treaty player. (PROs/avg/noobs).

this also affects a new player growth in the game, and frustrates a noob player more in AOE3 than any other games.

I don’t really play ranked but have not really run into any really toxic player except maybe a few one aoe 3 de. On the eso there were a lot jerks on there. I’ve found aoe 2 players to be less welcoming and more whiny and obnoxious then aoe 3 players. But I don’t play with pros either

i posted this because I have faced multiple times when good players talking ■■■■ to noobs also because the ranked tg is so unbalanced so teams with big elo gap face each other often and chances of this happening increases. But I played 2 years of aoe2 I rarely see this happening especially for high level players (these are top 50 on ladder)

I play casual team game in both aoe 3 and 2. So don’t know much about ranked. I know that casual aoe 2 team games are even more imbalanced then aoe 3 team games. Either way people shouldn’t be talking trash on noobs, their just trying to learn how to play. Are you a noob in aoe 3 and they were talking trash on you?

I am not the worst on my team but we are all noobs. We average 950 elo, opponent average 2200. AOE2 ranked is always balanced, unranked lobbies are not supposed to be balanced. On AOE3 the thing is even ranked is not balanced.

I have played with quite a few toxic players, it is starting to be unless you are in a clan with your mates there is no point playing team games.

I wish you could give players toxicity scores, maybe that could discourage it. However players could just give you a bad toxicity score even though you were not toxic. Need like a AI that knows what toxic chat messages are and can give a score.

there are not enough players, i dont complain. but i dont like toxic words especially they are pro

“Your death”. Lol that was pretty funny. I wouldn’t let yourself get bothered by typical horsing around in competitive games.

I’m not too bothered because I resigned first, but my noob team mate is genuinely wondering what unit it is, and he got trash talked by some top players, feel bad. And also later on keep trash talking and laughing at new players on twitch stream when I started watching his stream, is extremely annoying and lack of manner. This is fact.

It is pretty hard being a new or casual player on aoe3, you pretty much get smurfed, trolled and flamed until eventually you come across someone who genuinely wants to help.
I remember I would always avoid team games at all costs until I started making some good friends at this game.

Yeah I feel you. I am in the same situation. I frequently get trash talked in game and I am getting used to it. So far I have made two friends in game, yesterday we were playing TG and my friend paused game and went AFK for 2 mins, but opponent unpaused and killed all his army by the time he came back and won the game. That just almost never happens in aoe2, even at casual or low level noob games. I played 2 years of aoe2 DE almost every time player will ask reasons for pausing and wait for opponent to unpause. Before unpausing we usually type “14” to make sure everyone is ready. That’s why I feel bad for AOE3 community, seriously.