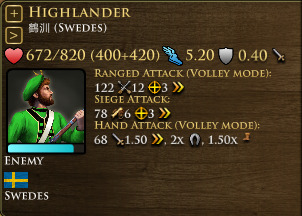 Sweden gets way too much stuff and it’s not even fair at this point, especially in Treaty …
Being able to train mercs from barracks at such cheap prices make them so broken. Like why would you give them so many options ?! They have Swiss Pikemen, Landsknechts, Fussiliers, Highlanders, Black Knights and Jaegers and they also have a politician that boosts their strength without adding extra coins at their initial cost.

Look how OP is the Highlander and he is only 2 pop and it costs only 200 coins…
Something needs to be done.

They certainly are formidable, but remember Sweden still has a 100 pop military cap and these units take up more pop. You can’t mass a lot of these, especially if you’re mixing in cav and arty. And these units certainly have the potential to overkill, making less efficient use of their damage.

Not exactly sure why but whenever I see treaty Sweden players utilize mercs, they go all-in with a single merc type in attempt to maximize the ability of that merc (like Landsknechts). And when that merc gets countered, they go all-in or mass with a different merc. And they tend to stick with using mercs because their deck is built for them.

Definitely a hard ball to stop sometimes, but not impossible. I think the classic carolean spam with fast-produced artillery and huss are worse to deal with. And mercs are punishable if they are 1-dimensional with it. They are usually good at tanking and doing 1-thing, but they can’t do everything (counter cav, counter inf, then seige). So you can stop them.

Sweden are being complaint since released with broken units and eco, and they have never been balanced under average.
Most of figures were shown and discussed too much but Sweden protectors are always trolling complainers don’t know how to play against Sweden only.
What Sweden can be balance in game time is only first 7 mins and they are just ignoring the mid-late game.

HIghlanders gets rolled by every skirmisher with 3x multiplier and more range?

Let’s give highlander 4k HP and 200 attack, your comment can still apply on it.

Ronins are worse, try kill them with aztecs, impossible.

That are indians, not aztecs. Also with indians urumis and canons are limited. You need exportation and shipments, with 9 urumis you cant do anything

Jaguar prowl knights have 3x multiplier on heavy infantry like Ronin. Slingers + JPK + War dance should at least allow you to trade evenly. Especially when you ship the support card and knight upgrade cards. You can also get them fast and cheap from the TC big button.

A decent way to micro would probably be to attack from two sides with slingers with the JPKs in stealth. Once the Ronin go into cover mode, attack with the JPKs out of stealth. Just make sure not to bunch up too much

Are you arguing that Sweden collects coin faster than Aztec collects food? JPKs are 120 food and 30 coin…

Even with melee resist, they aren’t acting 4 times better. That’s also why I included slingers in my breakdown. And before you bring up running out of wood, you can avoid that with a card.

Still with all Knight upgrades, if you are fighting a Dutch or German that has a lot of pop and tons of coin it’s difficult to counter those damn Ronin. They kill Jaguar prowls like flies and slingers are not enough to stop em.

In addition to that, ronin destroy buildings with a touch, like wtf.

Can you guys discuss ronin I the Japanese topic?

Those stats are compeltely broken as seen able.
I think a good start would change that imerpials age merc bonus politician to also increase merc costs by 50%.

Ronin are not japan specific units. Hatamoto are.

You are right, my mistske

I’ve gone and tested this in the scenario editor. Given the ratios I have above (8 JPKs and 11 Slingers vs 5 Ronin), you will always win. This is without the community plaza.

All of your JPKs willl die, but you should still have 90%+ of your Slingers left. That means you are trading very cost effectively. And again, this is without the community plaza.

This is consistent if you scaled up to 40JPKs, 55 Slingers vs 25 Ronin.

You’ll also be able to re-mass significantly quicker than a Saloon unit.

JPKs only vs Ronin is a loss however. You’ll only kill ~50% of the Ronin. You need the ranged support.

Surprisingly, there is a threshold where Legendary Slingers start winning on their own. 28 vs 5 Ronin will lose (1 Ronin left with ~200hp), but 142 vs 25 Ronin will win (with 59 Slingers remaining).

RE:Siege - not much you can do there unless you want to do the building HP dance. Might be useful with Slingers behind?