So i think that all of us have seen or played aoe4 and had seen this :

What do you think this is? maybe an option to tune the graphics? or maybe to make proportions like in x019?

Let me know in the comments

Yea I really have no idea what this is.
It was VERY curious.

From my understanding this appeared in custom game options no? 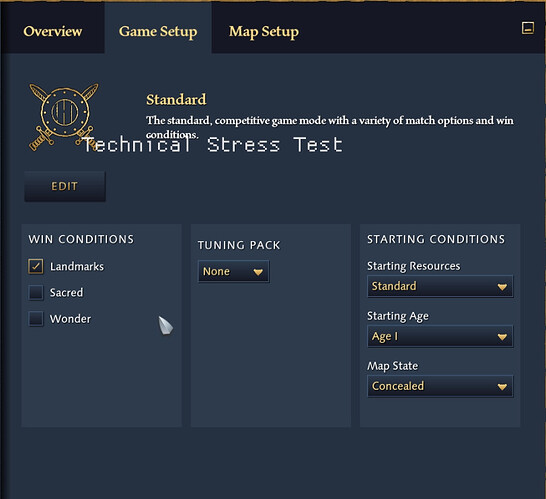 It seems gameplay related as its next to other options that are pretty gameplay impacting.

tuning packs were relics attempt at “supporting” mods in coh2, they are essentially extremely limited mods that can only change icons/unit stats. All kinds of other files were blocked.

Compared both company of heroes 1 and the previous AoE games it would be like 10% of what mods could do in those games.

ouff that doesn’t bode well for the “mod support” they’ve been promising.

They also promise it for coh3 on their discord, saying its one of the top10 topics, but so far nothing is known about how the new engine will handle mods.

With AoE4 being released in a month and mod tools said to be coming early next year, it is a reason to worry

If I understand correctly, aoe4 is not on the new engine used for coh3, correct? I believe they modified an existing engine for aoe4.

it is the updated essence engine, which is also used for CoH3

worst part is that its restrictions put in place intentionally, without those you could probably do as much as in SC2 modwise even.

You can email the original aoe2 and install the whole game on a usb thumb drive. The DE version was made by a company comprised of AoE2 modders. It’s impractical for modern games to be as open and modable, but I’m interested to see how well mods will be supported in 4

Both AoE4 and CoH3 are apparently using Relic’s Essense Engine 5.0.

OMG, Relic better not pull some limited modding crap like in CoH2, they would get canceled for it more than any cancel culture today.

we need the option to activate more than 1 tuning pack at once!

the sequence should be the load order.

thats from engineers in coh1/2/3, they can cut barbed wire and it overrides the attack order if you however over barbed wire even. might be useful for some abilities