Make the icons in the Tech Tree Preview clickable, and clicking the icon would take you to the associated building. For example, if I hovered over the Tech Tree Preview and saw that I was missing a farm upgrade, I’d be able to click it and it’d take me to a mill (similar to the existing hotkey’s functionality). This would make it easier to find the associated building quickly without having to remember the hotkey for it, remember where you placed the building, or spend time trying to identify which building on the screen is the mill. 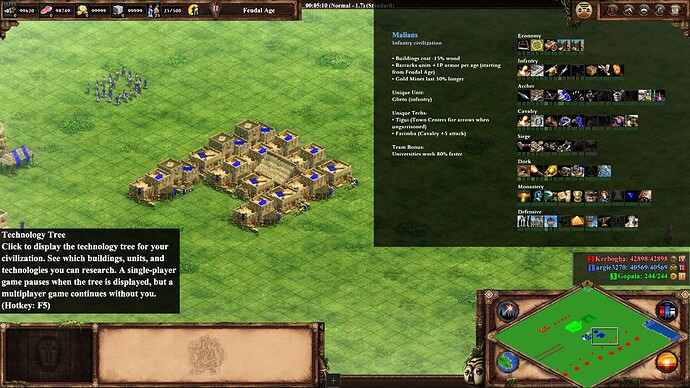 When units are selected, add the ability to group them by unit type in the UI. It could be implemented as a hotkey (such as holding down the Alt key) after the units are selected, as a setting in the Options menu, and/or as some other method. For example, in the below screenshot if I wanted to select all of the units on the screen (Alt + Comma) except the Trebuchets and move them, I’d have to Ctrl + Click the Trebuchets 7 times, all while the icons keep rearranging due to units dying. If the units were grouped by type in the UI, I’d only have to Ctrl + Click once to remove the trebuchets. This would make utilizing mixed army compositions less cumbersome. 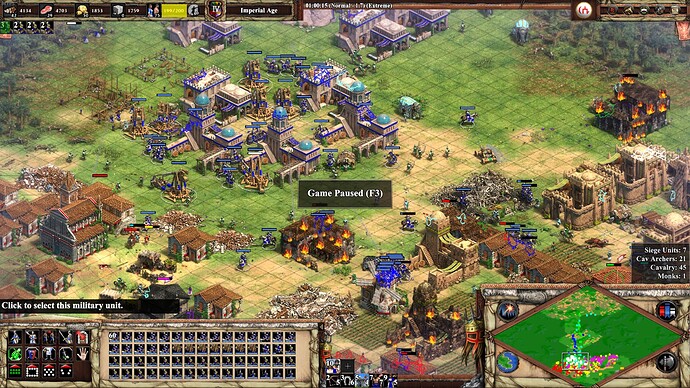 I’d also like it if icons/buttons in the unit/building action grid in the bottom left could be rearrangeable. For example, I’d want to rearrange the Villagers’ Build Military Buildings grid to something that makes more sense (at least for me). I’d want the Stone Gate to be underneath the Stone Wall (similar to how the Palisade Gate is underneath the Palisade Wall) because I never remember which gate is which. I’d also want the Outpost to be next to the other tower types since it’d be more consistent, and it’s easier for me to use hotkeys along the edges of the grid/keyboard, so I’d want the ones I may use more frequently along the edges. While it is possible to assign the buttons to different keys, I’m certain that I’d never remember them; grid layout hotkeys are a lot easier to use and remember. 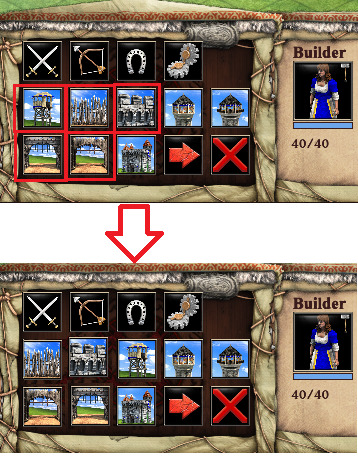 Hey TheBattlizer, thank you for the feedback thus far.

For clarification regarding the Trebuchet issue: I (using the classic hotkey preset) can ctrl+shift+click on a trebuchet in the selection to remove all trebuchets from it. Does that solve the issue or if not can you rephrase it?

Thanks, that’ll work for me.

I knew Shift+Click and Ctrl+Shift+Click worked for queueing/unqueueing units (I don’t remember from where I learned this because I don’t think the game ever mentions it explicitly), but I didn’t realize it worked for selected units as well. I’ll try to remember this.