I was reviewing videos like X019 and Gameplay of the Fan Preview, and I came across this English building, which was not in the stress beta, do you think it has been added for an exclusive campaign or has been completely discarded? I’m curious as to what the function of this would have been, most likely it has served to make improvements in siege weapons, Or maybe an advanced blacksmith with exclusive technologies from the English? What do you think? 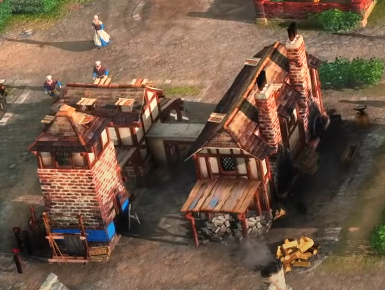 I assume it was available for all civilisations.

Andy and I would love to tell you more but talking about previous builds of the game is still under NDA.

Maybe one day it’ll be curious lore. For now while actual information is still being released and players are learning the game I think it’s best anyway to focus on the existing build.

You know that just make us want to know what it is more, right?

Since it has the same teal color like the university and blacksmith, it probably had special siege technologies.

Interesting: You can build it in feudal, while the actual siege workshop can be built in castle age.
Maybe it housed the tech to build rams?

Yeah but these are not my secrets to share. Ask Relic and World’s Edge.

nice eye!! i saw that building too in the fan preview… seeing the icon we can say that is like a cannon factory?? or maybe a strange blacksmith with upgrades to cannons or whatever… its a rare building but i would love to see it in game! it would be fantastic!!