I’m aware that the krakenmeister civbuilder is unpopular for cluttering up the modpage, but I’m uploading mine as private. I get my new civilizations, shown the correct flag and bonuses, but cannot load into a skirmish match without it kicking me out and saying “Unknown number of civilizations not compatible with this version”. Is there any way to fix this? I’ve tried deleting my mods, remaking them following every step meticulously, redownloading, and face the same issue. I thought it could be me so I tried a few other similar mods and UIs and none of them worked for me either. I’ve spent hours looking for help and haven’t found anything that addresses my situation. Thanks for any help guys I really appreciate it. I’m kind of a noob too so if you could dumb it down that’d be great 11. 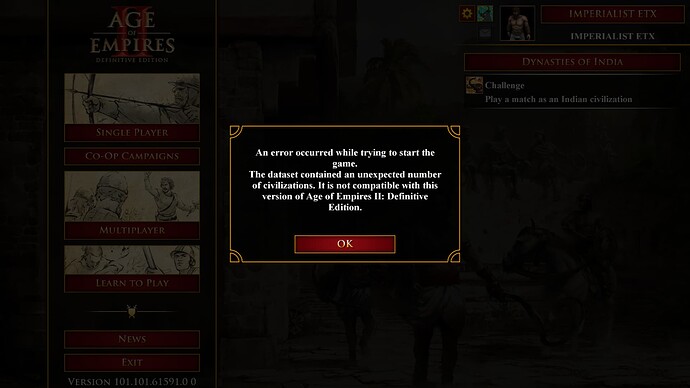 I got this issue too. Must have something to do with the latest update.

Those kind of mods break when a new DLC is released, because the number of civs in the mod is less than the number now in the game. The Krakenmeister civ builder probably hasn’t been updated since Dynasties of India released, so when you make a civ there, it’s still building with the old number, and thus 39 civs, when it should have 42 instead.